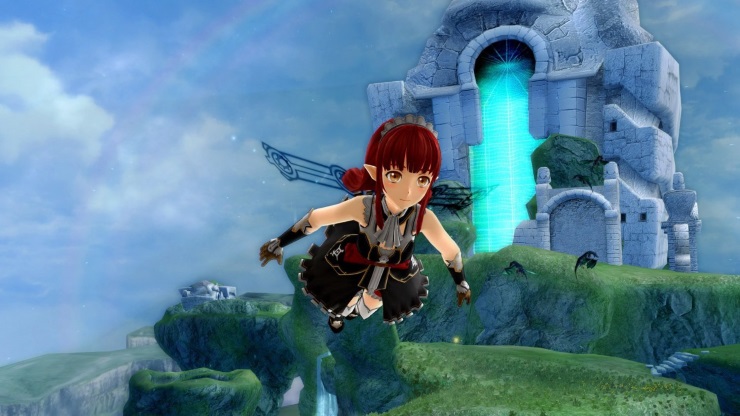 Sword Art Online is certainly a game aimed at fans of the anime and its predecessors. Although it isn’t technically canon in the SAO universe, it still features many people, places and plot points that have appeared before in some capacity, even if it the continuity isn’t quite there. For anyone new to the series, you may feel like you’re the nerd trying to befriend the cool kids. The in-jokes and the countless characters that are introduced without much of an introduction can be a little too sudden, but that isn’t to say the game is bad by any means. Let’s put it this way: if you like playing Japanese ARPGs, this game is certainly worth checking out.

Sword Art Online: Lost Song takes place in Alfheim Online’s first expansion, Svart Alfheim, and sees Kirito return to beat the MMO before the Shamrocks: a huge guild led by the pop singer and professor, Rainbow Arsharvin. As someone completely new to the series, I found the story quite straightforward to follow, even though there were a lot of those moments where it was assumed I was supposed to know who these people were and what had happened to them in the events leading up to it. The game does try to help a little – providing some dialogue and information about the in-game MMO world of Sword Art Online and its “die in the game, you die in real life” ethos. The idea is smart and full of opportunity, but the story in Lost Song is bland and devoid of any real intrigue or delight. Kirito isn’t trapped in Alfheim Online so there is no real underlying threat to his cause. He’s just a chap playing a game with his mates, girlfriend and little sister – bless him. The MMO element of the game is well-implemented. There are many nuances within the body of the story and environment that make it feel like a real mass multiplayer. Countless NPCs are running across the towns and chatting to each other. In the open areas where the majority of the fighting takes place, other NPCs are engaging with bizarre creatures as you fight your own battles. Fetch quests are in abundance and text appears on the left of the screen when a character in your party uses an item, attacks a monster or heals you. The effort exerted making this MM faux (you can thank me for that zinger on Twitter) feel authentic is evident; even the dialogue used in the cutscenes is ace. At one point, someone said “He tanked everything for us, so we could sit back and focus on DPS,” which if you are familiar with games like Warcraft, Guild Wars or StarCraft, you’ll understand.

In the fairy-inspired Norse setting of Alfheim Online, you can fly for the first time. At first, the controls can be a little frustrating, especially as there is no fluid transition to go from walking to flight. Instead, you stop, press the up button on the D-pad and take to the sky in a relatively quick fashion. Once you’re in the air, it can be quite liberating. There are a lot of different foes in Svart Alfheim, and after a rather gruelling marathon of hacking and slashing your way out of a pickle, there is nothing better than getting away quickly and soaring through the beautiful blue sky. The camera angles can get a little aggravating when you’re trying to turn around, fight a large group of enemies or reach the surface of a floating island; even after ten hours of playing, you can still encounter these issues in the most random of instances. Fighting in the sky combines all three of these bugbears, so when you engage in a dogfight, be prepared to turn the air blue.

Combat is not too dissimilar from other Japanese hack-and-slash titles. Square is for your lighter attacks and triangle is for the more forceful manoeuvres. You can hold the R1 button in and try out a bit of magic if you like, offering an alternative to the repetitive nature of the weapon attacks. The flow of combat isn’t as satisfying as say, One Piece Pirate Warriors 3 or the Dynasty Warriors series, but it does have a better sense of control and skill. It isn’t about button bashing and going hell-for-leather – the at-first clunky mechanics will begin to morph into a solid system that provides many satisfying battles, especially against some of the games larger bosses.

My only grumble with combat comes when you are overwhelmed with some of the monsters, particularly the flying ones; the feeling of fighting your mate on Street Fighter as he picks Dhalsim, continuously punching you with those long arms as you seethe in the corner of the screen comes to mind – fundamentally, if they hover over you, it’s curtains. You can try everything, but they won’t let you move at all. Your party is now made up of three different characters, and you don’t always have to play as Kirito, unlike before. This helps to offer that little something new and keeps the fighting fresh through its rather long campaign. Each of the 17 playable characters is different to offer so experiment with them and learn what works best for you.

After you’ve cleared the first Island (Woglinde, the Island of Meadows) in Sword Art Online: Lost Song, you’ll get a chance to play the multiplayer. You’ll become familiar with each of the creatures quickly, so getting to test your skill against other fighters from around the world will offer a completely new thrill. You’ll also be able to team up with three other players in co-op mode, taking on quests together and forging friendships in an online capacity within a fake online video game. I appreciated the fact that I had to work for the experience too, given how other games offer it on a plate – often meaning players can bypass the single player game just to get stuck in to the multiplayer elements (cough, Call of Duty).

Sword Art Online: Lost Song is one of the few games I’ve ever played that had me go from disliking it at first, to finding something good in almost every aspect. That isn’t to say it doesn’t suffer at times. Along with the some repetition of combat and the dreariness and monotony of its dungeon segments, there are some really odd scenes referring to sexual harassment and adult magazines that feel completely out of place and unnecessary; the choice of clothing for the female characters is blatantly sexist as well, which begs the question of its necessity in a game aimed at a wide range of people.

Multiplayer offers a break from the repetitive gameplay.
Some of the quests are laborious.
Fighting requires more skill than most Japanese ARPGs.

Dungeons look the same and feature ugly level design and lack of colour.
After a while, combat becomes a chore.
Sexual aspects do not work at all and feel completely out of place.

Sword Art Online: Lost Song is a solid Japanese Action RPG that has enough to keep old and new players interested with touches of innovation here and there, even if it does fall short in certain areas.

You may also like
Bandai Namcosword art online lost songPlayStation 3