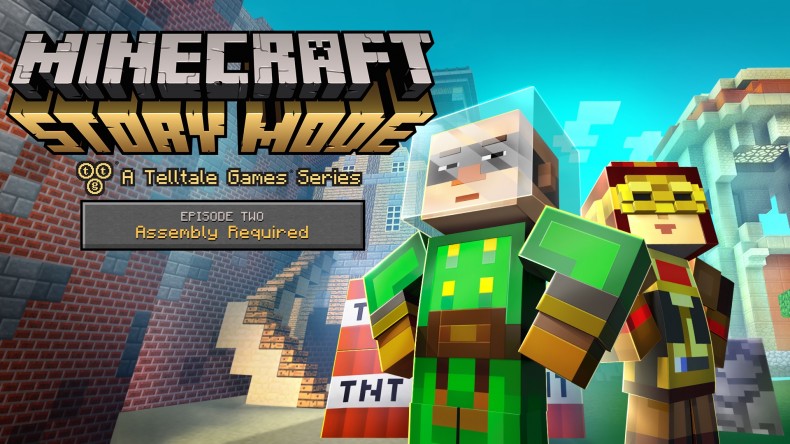 The second episode of Telltale’s Minecraft: Story Mode, Assembly Required, begins right where we left off in the last one, and it seems that some of the choices we made in The Order of the Stone have had an impact on how this one plays out.

As a quick recap, we were presented with two options at the end of The Order of the Stone, either go to find “The Griefer” or “The Engineer”. Depending on your choices, you begin Assembly Required by heading to the location where one of those two can currently be found. You will also have a different friend accompany you on your journey and when you reach your destination. As I mentioned in my first episode review, I have been playing through with both a male Jesse and female Jesse, and sadly it seems that my feelings about the latter continue here, with her particular run through of the episode being the drier of the two. Regardless of choice, each destination is a riff of elements within Minecraft that will delight fans. The Griefer is located in Boomtown, a crumbling settlement where TNT and tomfoolery reigns supreme. Without giving too much away, there’s a wonderful extended sequence of dodging explosions and eggs which culminates in a TNT cannon stand-off. For anyone familiar with the myriad of wonderful videos on YouTube, the TNT cannon is a particular favourite and to see that fan service done in this way is delightful.

If you made the alternate choice, you and your companion head to Redstonia, a utopia of smart individuals creating clever contraptions utilising the Minecraft engineering tool of redstone. The activity in Redstonia is more sedate than in Boomtown, and the writing is more comprehensive with a lot more jokes thrown in, albeit jokes that will appeal to a younger mindset than mine. It’s interesting that there is such a stark difference between the two areas with one being all out action and the other more sedate with the laughs coming from the dialogue rather than the activity. I found this interesting in a game genre that is often criticised about choice not really having much impact on how things play out. At least for the time being, that most certainly is not the case with Minecraft: Story Mode.

Once you have collected your target individual the different story strands converge and we are back following roughly the same path again, although there is an interesting difference in the characters waiting for you back at base depending on a choice you made in The Order of the Stone. I’m keen to see how that plays out over the next few episodes. The rest of Assembly Required whips along at quite a pace, and it is pretty much over just as it begins, which is a shame as it feels a very short episode with not a lot to progress the actual story. Along the way some more things fans of Minecraft are familiar with are introduced with a pretty cool QTE sequence involving Endermen and gravel, but overall this episode feels fairly light on content.

Once again the Minecraft aesthetic is absolutely pitch perfect, and again ideas for future builds of my own were presented, further fuelling my enthusiasm for the source material. The blocky world of Minecraft is so well represented that even the notoriously criticised, stuttery engine that TellTale Games uses blends into the overall feeling that this is a Minecraft world. It’s really very well done.

Assembly Required very much feels like a tricky middle episode, despite it being only the second in a five-part game. Despite there being two very different beginnings to the episode which will encourage multiple playthroughs, it feels very abrupt and for those who only play through once it is exceedingly short, I hope that it’s not indicative of the rest of the episodes going forward. The laughs feel light too, but I suspect that is my age talking as I am clearly not the intended audience. It’s a solid episode, but like its predecessor, not extraordinary. I hope that episode three pulls it back again.

Assembly Required is a solid, but very short, entry. Here's hoping that episode three can start to pull it back around.