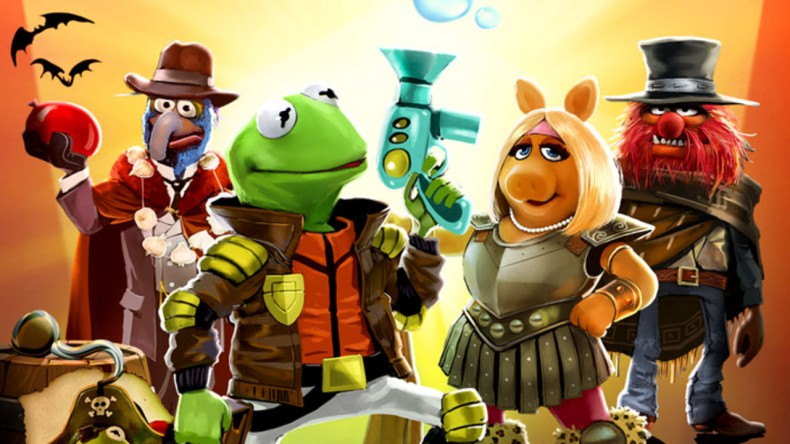 We all love The Muppets right? With their silly antics and funny jokes that reach out to adults and children. A sense of humour that transcends generations and has been around for centuries. Yes, The Muppets are great. I can’t help but feel that’s what Disney are hoping with Muppets Movie Adventures though, as aside from the branding, I can’t see what it really has as a selling point. It doesn’t help that the game’s language select screen doesn’t actually tell you that it is what it is. I sat there dumbfounded at what it was until I scrolled through four pictures and realised that what they were doing was holding flags to denote language specification. A little heads up would have been nice.

Muppets Movie Adventures is a side-scrolling 2D platformer that mixes things up by giving you a weapon that you can hit things with, fire or throw. It at least does this competently. The level design is functional in the way it allows you to get from A to B with little to no skill, with enemies being the only thing you really need to worry about. There are five levels which are roughly themed around film genres, each featuring a different Muppet as the star (apart from the last where leading man Kermit takes centre stage for the second time). Each level is a straight line progression from start to finish with a boss fight at the end. You might get the occasional bit of touch screen action, but these amount to pulling levers, rotating cogs and solving rudimentary Flow-style puzzles, which don’t actually have to be properly completed to progress. Once a level is finished you unlock a secondary skill for that character, so now you can go back into a previously completed level to be able to reach areas that were blocked off to gather more collectables. These take the form of fifty stars, five movie reels and one gold ticket per level, and unlock nothing more than concept art within the Extras section. While the concept art is nice, its presence makes the actual game look terrible by comparison, and makes it hard to justify replaying the levels as the rewards are scant. There’s no option to re-watch any of the cutscenes and there’s no real ending to the game, meaning there’s practically no pay off for the time investment at all.

Hit collision is woeful, too. I’d find myself catching hits from things I was a good distance away from, and when that happens mid jump – pushing you back into a hole for insta-death – it is immensely frustrating, and death does happen a lot with only six hits before you expire and hearts few and far between. The “director” pops up after each death with one of a limited supply of quips which will already be repeating themselves well before the end of the first act. It’s supposed to be a game for kids, but my son frequently grew frustrated and either asked me to play it for him or wanted to switch to a different game entirely. But, the most unforgivable thing here is the use of the branding. Muppets Movie Adventures boasts a cast of some of the most loved characters in the world, and yet their trademark humour is completely missing. None of the cast voices are present, the lady doing the voice overs for the cutscenes sounds bored rigid and they couldn’t even be bothered to put in “Mahna Mahna” (earworm there for your day), which would have been welcome in the end credits that were lengthy enough for me to hear the generic movie night music loop through six times before abruptly stopping at the end.

Muppets Movie Adventures is light on content, light on ideas and doesn’t truly respect the Muppets who star in it. It’s a £2.99 iOS game packaged into a full priced Vita release. There are PS1 games available on the Vita that would be a much better use of your money and more enjoyable for your kids to play.

Too little content
An insult to the Muppets
Frustrating for kids

2 step authentication is live for PlayStation Network accounts in Europe

World of Warriors Coming to Console