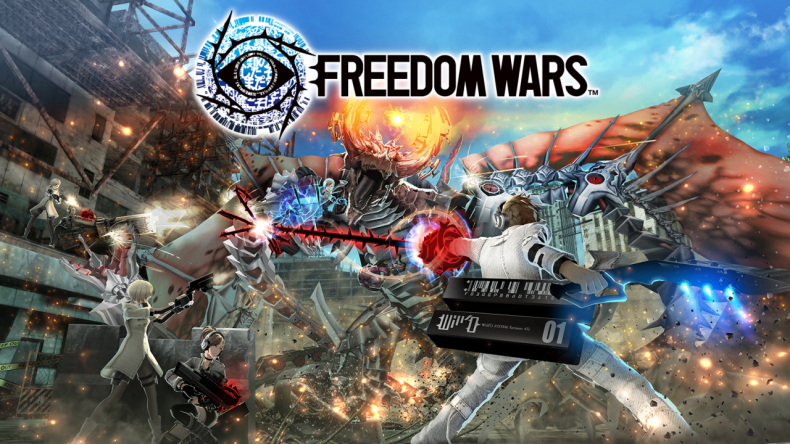 Freedom Wars has a name that sounds like it was made up by kids playing in a playground. It’s also the Ronseal of game titles: it’s exactly what it says it is. You start the game in quite a traditional sense: you’ve got amnesia and then it gets weird, you are tasked with assisting your comrades in destroying the large creature that hit you so hard all of your memories fell out. It turns out that losing your memory is such a bad thing that you are given a million year sentence because you were reckless enough for it to happen.

The premise then, is that the world has gone to pot and humanity has split into factions called “Panopticons”, groups that fight amongst each other for resources. Civilians are considered to be the most important resource, as they’re the brains of the world. These guys are frequently kidnapped by large robots called “Abductors”, and human members of rival Panopticons, which is where we come to who you control.

You see, while civilians are brains, the brawn are called Sinners. Sinners are considered to be a drain on Panopticon resources, only good for carrying out operations on behalf of their Panopticons under the terms of lessening their sentences. Sinners are regulated harshly, you can’t do much at the start apart from undertake missions, but as you do you’ll earn “entitlement points” with which you can claim entitlements that allow you to do more in the hub world; so, as you progress, you get more freedom. If you feel that I’m snowing you under a ridiculous amount of information then it’s only right to tell you that this is what happens in the game. It literally throws more and more information at you at the start – the tutorial is still ongoing after you gain your second level as a Sinner.

Let’s start with the positives, then: the game looks great, for a start, character designs are fantastic and the hub world is nicely designed, though the mission areas are a bit unimaginative. The character design system is pretty robust, allowing you to make your ideal anime protagonist, before letting you design your constant companion, referred to as your “Accessory”. He or she is an interface and ally in battle and can be directed to do a multitude of things on the go, like carry rescued citizens.

Sound design is fantastic. Many a time have I had the hub world music as an earworm, and it just makes me think about what I could be doing in the game, similarly to the way Destiny does (which, despite it’s flaws, to me is a great game). Battlefield play is a mixed bag: differing mission types require you to reclaim citizens from Abductors, fight rival Panopticon humans to claim a required amount of citizens first, resource gathering, or having to guide your own Panopticon Abductor through an area while under attack from rival humans. You go into battle with chosen Sinners from your Panopticon or with friends via online or local play. In play you have a melee and ranged weapon and your “thorn”, which is a leash on your arm that can zip you around the areas, drag down Abductors and, later, provide healing or shields for your compatriots.

The control scheme is frustrating, though, and camera control is completely up to the player, which can be annoying as losing sight of enemies happens pretty frequently, and it’s up to you to sort it, which, when you’re being attacked by a giant bipedal robot that hits like a truck full of explosives, can really grate. Death is thankfully not the end of the world though, as you can be resurrected by your Accessory or compatriots, and if they are unable to do so you have a certain amount of retries you can use.

There are some odd things in certain aspects of the game: for example, in your cell you have three seperate interfaces. The start menu is used to accept missions and edit loadouts. Another screen allows you to claim entitlements or make donations to the Panopticon (which shaves years off of your sentence), and finally you have your Accessory which allows you to leave your cell and save the game. Outside of your cell your Accessory watches over you everywhere, but bizarrely, you can’t save your game anywhere but inside your cell. Even more frustratingly, there are times that you can’t go back to your cell, meaning you have to go through the next area before you can actually save. Another rather odd decision are the penalties you get for infringing on things you haven’t earned the required entitlements for. Breaking petty rules incurs minor increases to your sentence, like ten to twenty years or so. Later on you are caught doing something that, realistically, is very naughty. Although you got a million year sentence for losing your memory, for breaking quite a serious rule you get hit with only two hundred years. The rule-makers are nothing if not inconsistent.

Finally, there’s the mission failure state. A failed mission puts you back to the start of the segment before that mission, meaning that any journeying or cutscenes must be undertaken again before you can retry the mission. A quick retry option here would be so much better, as after failing a mission three times I was on the verge of throwing my Vita to the floor in rage, but, I value my gear so maintained my composure.

Freedom Wars is a decent enough Monster Hunter-esque game that the Vita really needed. It’s not without its faults, but while I may have explained these at length, they are not enough to detract from the overall enjoyment of the game.

A fun, flawed game, but a decent Vita exclusive for those after some Monster Hunter style action