Not a Hero Review 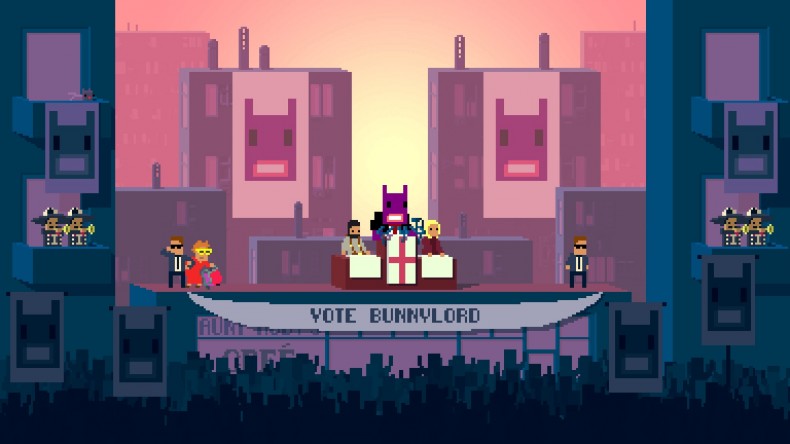 To a lot of people, politics is a boring topic of conversation, and the majority of us feel like we can’t trust politicians as far as we can throw them. With the recent election, a thirst for true change has blossomed out of the ashes and citizens up and down the country and crying out for a leader that will lead this world into a new era. Well, my friends, let your thirst be quenched: BunnyLord is here.

If you’ve ever played Hotline Miami or OlliOlli, you’ll instantly recognise this game to be a lovechild of Roll7 and Dennaton Games’ publisher Devolver Digital. Not a Hero takes the side-scrolling canvas that is central to OlliOlli and overlays it with the run ’n’ gun violence of Hotline Miami, creating a truly brilliant title.

BunnyLord, a purple suit-wearing anthropomorphic rabbit particularly fond of using hyperbolic adjectives and exaggeration, has come back from the future to be elected Mayor in order to prevent the apocalypse. Your mission as member of BunnyLord’s Fun Club is to help him win over votes by cleaning up crime across various districts of the city, with new characters unlocking as BunnyLord’s approval rating climbs. Each has a different skill set from the last, some being slower but more powerful, others being able to run and shoot at the same time, or slide tackle enemies. A lot of the cerebral demand comes from viewing a level and working out which character would be best suited for the specific environments and types of enemies found throughout. Each level follows the same routine: an often hilarious briefing by BunnyLord, three objectives you are tasked to complete during the level followed by a victory milkshake of various flavours at Aunt Ruby’s diner. One thing that must be noted is the sheer comedy value of the dialogue, with the random statements and expletives that BunnyLord comes out with being genuinely laugh out loud funny. His voice is non-existent, instead being replaced with a sound similar to that of a balloon being rubbed whenever he speaks (though it’s apparently a squeaky airing cupboard door), only adding to the hilarity.

Despite the comedy, this isn’t a walk in the park and it’s certainly on par with the difficulty level of other Devolver published games. The idea is simple: slide, shoot and cover – but mastering them takes a while, especially with the unusual 2¼D-aspect. As you progress from Vodkaville right through to Sushicentral, the spikes in difficulty become apparent and perhaps too steep. My average amount of deaths in a level was around eight, but one level nearer the end of the game caused that to grow hugely, resulting in an infuriating 43 tries. The game is frustrating but not to the point that you feel defeated, instead you feel compelled to try again, as Not a Hero takes the carrot and stick approach, urging you along by dangling victory right in front of your face. BunnyLord sums it up perfectly, concluding that it’s “motherfucking delightful-hard.” The pixelated art style that has become so iconic of hyper-violent games makes a comeback, with beautifully unique designs allowing the player to distinguish the different districts of the city. Perhaps “hyper-violent” is a bit of an overstatement, as Not A Hero in no way incorporates the dense amount of gore found in Hotline Miami, but it’s certainly one gushing wound away from a total bloodbath. The way in which the violence is portrayed is different, too, straying away from the exhausting, serious tone, and relaxing it to keep things feeling light and lively.

It’s hard not to view Not a Hero as a satire of current politics, with BunnyLord being horribly egotistical and devout to his mission of clearing the streets of crime and drugs. His comical policies to win public support (such as saving pandas despite calling them “bamboo-eating douches”) ridicule the electorate in a tongue-in-cheek manner, creating an in-joke which pokes fun at the simple-minded and easily-impressed amongst us.

The biggest complaint I have is with the length. It’s a bit on the short side, but what’s in here is absolute gold. Coming in at 21 stages with three bosses, it took me just over four hours to complete. There is replayability value, but it only goes as far as replaying stages to complete missed objectives. It would have been good to have the option to replay the entire campaign in hard mode (or something similar) for players seeking a bigger challenge.

BunnyLord is everything we want in a politician and more – his zany personality and random outbursts lending a lot to the success of Not a Hero. The simple mechanics are welcome when so many games demand a vast array of learning, and although it’s clear where it has drawn influence from, Not a Hero innovates enough to stand apart from the crowd and become a success on its own merits. Bringing fun in abundance and a criminal amount of puns to the table, Not a Hero is a cult-classic in the making, not to mention an absolute diamond of a title. In the words of the rabbit himself, it’s mind-blowingly badass. Vote BunnyLord!

Difficulty spikes can be a bit extreme.
A bit on the short side.

Bringing fun in abundance and a criminal amount of puns to the table, Not a Hero is a cult-classic in the making, cementing itself as one of the best indie shooters around.

Not a Hero PS4 Review