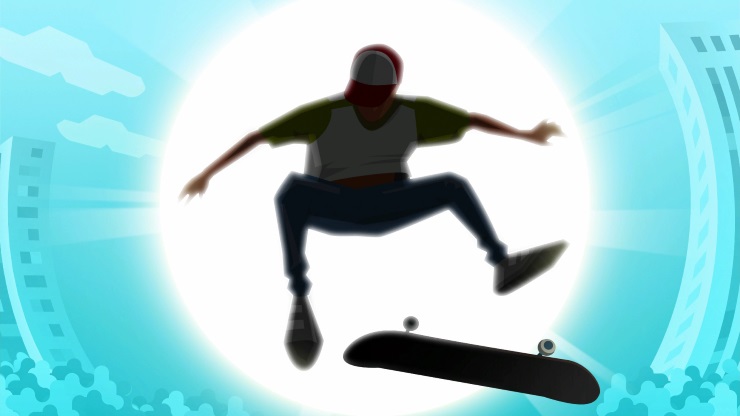 OlliOlli 2 does everything you could ever possibly want a sequel to do. It refines what made the original game so addictive and fun, but adds layers on top of the already successful formula so as not to grow stale and repetitive, all the while improving every other aspect of the game and applying an unreal amount of polish.

For those unaware, OlliOlli 2 is a 2D skateboarding game, in which you have to trick, flip and grind your way through a set of increasingly difficult tracks. From there you can make it what you want it to be. It can either be a chilled-out experience, where you just cruise though the tracks listening to the – once again – awesome music; or it can make you infuriated as you constantly try to reach that high score, but at the last hurdle end up with your face in the concrete. Either way, it’s great fun.

The mission structure of Welcome To Olliwood is pretty much the same as its predecessor, with five different areas containing five different tracks; with a harder version of each available once you’ve completed all the challenges. It’s a structure that works and I’m pleased they’ve decided to stick with it, rather than go overboard with too may levels. What will immediately strike you, however, is just how much better the new areas look in comparison to the last game. Gone are the grainy, dull, mostly grey backdrops, replaced by a colourful, vibrant, massively varied collection of new areas. With the theme being movies, areas take place in the films that are advertised in the first area of “Olliwood”. You can skate your way though an Aztec world, the Wild West, and a theme park taken over by Zombies, before finally ending up in a sci-fi setting.

OlliOlli 2 introduces a few new mechanics to the game, the main two being “launches”, which see you fly off a ramp and require you to time your jump perfectly to be sent hurdling through the air, and “manual landings”, which allow you to keep combos going, as instead of landing and then pushing to gain speed, you do a wheelie on your board until you can jump again.

The introduction of these new mechanics sensational, as it means you have to go through the learning process of the original game again. Due to the changes they’ve made, you can’t just be a master at the game straight away after playing the first one. If you wish to reach the high scores and complete all the challenges, you must learn these new skills. It revisits that moment of clarity you had with the first game when you finally nailed that seemingly simple mechanic that you just could not quite time right. This leads to you having to change the way you play the game. Since you can’t push on a manual, perfect landings, grinds and the new launches have become even more pivotal, as you must use them to keep a good speed and not wind up with your run ending in an underwhelming stumble. The incredible levels of polish are clear to see, but can only be really felt once you go back to the original after playing it. Remember how smooth and responsive OlliOlli felt? Now, in comparison it feels clunky and cumbersome – it’s genuinely hard to go back, which is a massive testament to just how much Roll7 have refined and improved their game.

Aesthetically it has improved hugely too: the UI is more intuitive and slicker in design, making it very easy on the eye. An addition I particularly liked was a progress bar that comes above your combo meter. It isn’t intrusive, but I was able to see how many points I needed to complete a challenge with just a passing glance. I really like the inclusion of a little star next to every move in the tricktionary, which indicates if you’ve ever pulled off that particular stunt or not. A profile page has also been added to the game, where you can find all your progress, and which also keeps count of how many perfect moves you’ve pulled off. A couple of other features have been added too, with yet more returning improved. Daily Grind makes a return, a mode in which, after you’ve finished practicing, you’ve got one try to get as high a score as you can, and pit yourself against the world. Spots return, too. These give you a shorter track of each available mission in which you have to combo the whole way through, very reminiscent of the Daily Grind. The tutorial has been redefined as a “Skate Park” where you can practice all the new moves, and there’s soon to be local multiplayer patched in, which we’ve played and will bring you a video on shortly.

I’ve played it on both PS4 and PS Vita, and whilst it’s completely serviceable on the PS4, I can say with complete certainty that it’s right at home on the Vita. They’ve gotten rid of the frustrating and laggy touch screen interface, so it’s immediately quicker to get into the game. Plus, there’s just something about the Vita’s sticks that make the game feel so responsive, and it’s just the type of game you want to get as close as possible to when you’re gunning for the high scores.

OlliOlli 2 is a perfect example of a sequel to a game done right, as they’ve successfully managed to keep the soul of the game while simultaneously innovating how you play it. Faultless.

OlliOlli 2 is a sublime game, that manages to keep the keep the soul of what the first game was, but refine it and innovate it to new-untouched levels of brilliance.