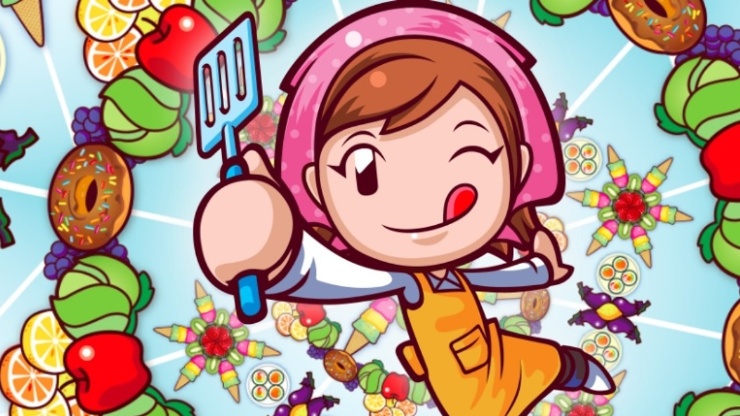 They say sugar, spice and everything nice is the recipe to make a perfect little girl (well, leaving out chemical X, at least). Add a 3DS to the equation and you get Mama, the saccharine sweet maestro of the Mama series, whose infectious smile and enthusiastic encouragement have graced many games since the first title in 2006, and are here again in Cooking Mama: Bon Appétit, the fifth game in the series. Very little has changed over the years; the usual gameplay of picking a recipe and following the steps to completion is still there, the only real notable change being that Mama is now rendered in 3D unlike her previous 2D incarnations.

For those not aware of what Cooking Mama entails, you pick a recipe before each step is broken down into a mini game in which you need to match the specified movements to suceed. You’re graded as to how well you performed with a score out of a hundred and either Gold, Silver or Bronze medals. Completing these opens more recipes to make, and more mini games in other modes for you to play as well as allowing you to undertake recipes in Mama’s “Dojo”.

The individual steps are simple enough, requiring between one and three things to be done to achieve your goal – it’s not molecular gastronomy by any means. These steps vary wildly in difficulty, with some being over just as you start, and others working you right to the end of the time limit. The movement detection for these can be slightly off too, with some of your swipes and twists either being implemented incorrectly or not registering. There are also times when it feels that the developers are struggling for new ideas, with several recipes being so simple that they’ve had to pad it out with sections that don’t actually have anything to do with cooking at all. One irritating example sees you tasked with keeping some chicken away from a hungry dog. They can be bafflingly random.

Mama’s final gradings can seem a little out of place throughout your time preparing the food, with her telling you that you’re better than her for achieving gold standard in individual steps and if you finish with silver ranking at the end, but only a cursory ‘Mama’s impressed’ for achieving a perfect score (who really needs these arbitrarily assigned numbers anyway?). Mama’s Cooking Dojo sees the extraneous fluff removed from the recipes and stringent time limits placed, tasking you with completing them as soon as possible to get the highest score. These have no bearing elsewhere in the game, so their presence is just there to test your ability to complete the recipes with as few mistakes as possible.

Outside of the recipes there are several selections of mini-games for you can take part in, which are unlocked by completing the main recipes. These involve various activities around gathering ingredients, helping Mama with chores, working in Mama’s shop or ‘Studying’. In the studying category kids can complete spelling and maths challenges and other educational pursuits designed to get their brains working. It’s not much for adults, but as an educational tool for kids it’s a nice little extra and was a pleasant surprise.

Unfortunately Bon appétit isn’t a gourmet wonder but more like fast food. It’s good in small doses, kids love it, and you can garner some enjoyment, but it’s cheaply made and lacking in sustenance. If you’ve played previous iterations and want more, then you can’t go wrong with more Mama. But new-comers or those suffering with Mama fatigue won’t really find much here to hold them for long.

Cheaply made
Nothing new

Not so much Masterchef, more Easybake oven.