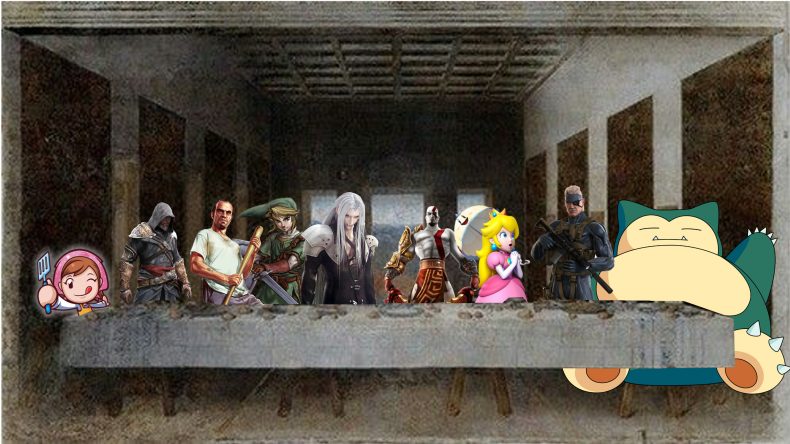 You’ve seen the kind of chat where people list who they’d love to have at their fantasy dinner party. It’s usually brilliant minds like Stephen Hawking or inspirational leaders like Obama or Martin Luther King Jr.

That idea led me to thinking who I wouldn’t want to appear at a dinner party I hosted. Who would be the worst kind of video game character that could turn up to ruin all your hard work and just generally be a royal prick?

Well ponder no more, dear reader, as the following are the folks you’ll definitely want to avoid if you ever find yourself in this kind of discussion. Read on to see if you agree with my unbiased and completely unflawed reasoning. While there is that innocent look about Snorlax, you know when it turns up you and your other guests will be lucky to get a look in on the food that all your love and attention went into. Yes, I know Snorlax needs something like 400kg of food when they do finally get up, but it’s made worse by the fact you know they’ll be late (citing the old “slept in” reason), to then snaffle all the good stuff and insult your other guests by pushing past them to go have a snooze in the other room and ignore everyone. It’s just rude. Could you imagine the carnage if Trevor were to darken the doorstep and demand he be let in? He wouldn’t even be polite about it either. Worst still he wouldn’t have been invited in the first place! I can see the awkwardness now. He cracks a joke that one person doesn’t find funny and it’s the opposite scene from Goodfellas where instead of Trevor saying his feelings of being insulted were a joke, the other guest ends up getting a homemade lobotomy courtesy of one of my soup spoons which then has to get tossed out along with the now bloodstained dinner table. It’s just not worth the hassle. If there’s one sure fire way to bring the mood of a party down then Kratos will find it. The dark brooding is incompatible with a good time dinner party and I can’t see any of the other guests getting much of a conversation out of him. Not to mention the insistence of him bringing along the various weapons (that’ll scratch up all my furniture) and most likely Mimir. While Mimir himself would be an interesting head to chat to, he would likely freak out the other guests due to the whole “no body” thing. The constant questions directed at Kratos of why he carries a head about will probably send him into a rage and end up with my house or the guests being smashed. I would prefer the latter, but it’s rude to say that kind of thing out loud apparently.

I really don’t need Sephiroth bringing his mummy issues to the table when we’re trying to eat. I also don’t need to be picking out 4 foot long silver hairs out my dinner or out the furniture for the next few weeks. While he does have quite a soothing voice (in Advent Children anyways) I really don’t need a repeat of Nibelheim if he takes a Jenova turn and has a bit of a flakey. I don’t think I have enough insurance to cover everything in the flat so I’d rather not risk it.

Now this might be an unpopular opinion and I might consider letting Ezio in if it was older Ezio but younger (pre Assassin’s Creed Revelations) Ezio was a bit of a dick, to be fair. Coming from a rich family, which I do not, and being too used to the fine dining experience, which I usually class as eating a KFC with a napkin, I can’t see him being a good fit unless you’re planning on pulling out all the stops. I’m talking minimum 6 courses with the main being some giant bird like a swan or an individual ortolan each and the dessert would need to be one of those Frrrozen Haute Chocolate Ice Cream Sundaes each which come in at $25k! That’s a bloody house deposit! I can’t see me, or most people, being able to afford that kind of experience. Sorry Ezio, you’re off the list.

Another one that will be too used to the finer things in life, which you can’t blame her for thanks to the whole princess thing. However, it’s not just the finer palate that makes Peach an unsavoury choice, it’s the trouble that follows. Now I’m not blaming Peach cause she never asked for this, but I could do without some big fire-breathing Bowser kicking my door in begging her to go with him only for her to be kidnapped in front of us while we’re held back by all his minions. I can also do without Mario and/or Luigi then turning up, jumping over everything and wrecking any boxes I happen to have in search of coins or mushrooms. Even if I wanted Snake to turn up, chances are he probably wouldn’t. He’s been lost to the soldier/spy/infiltrator life and he’d only claim that he never got the invite anyway. On the off chance he did actually read the invite and turn up, I don’t fancy trying to explain to everyone why he insists on sitting inside a cardboard box and only accepting food that’s passed through the handle hole. Snake, if you want an invite to my, or any other dinner party, you need to ditch the box and buck up your ideas. Is there a worse person to invite along to your dinner night than Mama? I’ll likely be slaving away in the kitchen putting together something that I think is pretty damn good, but you know that Mama is gonna waltz in with her holier-than-thou attitude and go full on Cherish Finden on everything, even down to the choice of plates and cutlery. I don’t need the extra stress of my sausage rolls being criticised for not all having the same golden, hue thank you.

And finally Link! Now I know he’s a good guy and a true Hylian hero but just imagine the scenario. There’s a knock at the door, I open it to see Link in front of me with what I assume will be a killer bottle of Hyrulean wine “Oh hey Link. Good to see ya bud, c’mon in!” I’ll say, to be answered with “HA HO HIYAH”, “UUUAAHHHHH”, “GIIYAHHH” or something along those line. Also, no matter how many times I’ll tell him there are no rupees in any pots or ceramics I happen to have in the house he’ll go smashing them up anyways. I now he’s a good guy and would leave me some rupees to pay for the damage but the exchange rate to pounds is just abysmal.