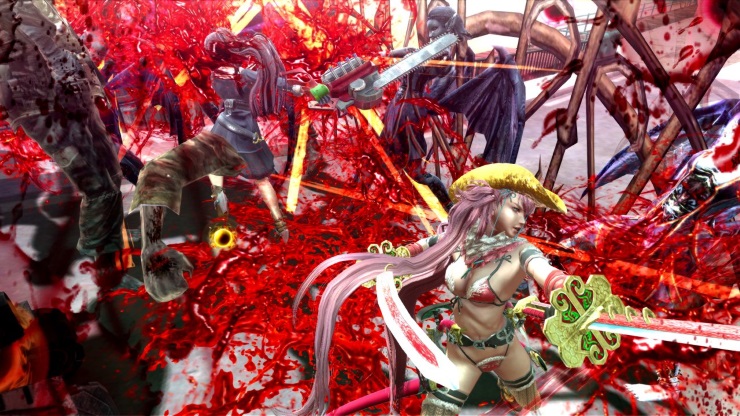 There’s an elephant in Onechanbara’s room that’s simply too big and grey and bikini-clad to ignore, which makes it as good a place to start as any. This series is rude, crude, and knowingly silly; essentially about four hot women slaughtering zombies in various states of dress and undress. It may or may not quieten the rattle of pitchforks to report that, although two of the main characters are in string bikinis and cowboy hats by default, you can change the outfits to something more respectable before you start if you wish, although their beastly transformations are fairly risqué as standard. There, that’s got that mostly out of the way.

So yes, it’s a bit repellent if taken at face value, even worse if out of context, but at the same time Onechanbara Z2: Chaos is unashamedly brazen and adult; it’s right there on the box. If you’re coming into this game in the first place, you know what you’re getting, and it’s probably half the reason you’ve come at all.

The loose-fitting plot follows two pairs of sisters, vampires Kagura and Saaya, and vampire-hunters Aya and Saki. Thrown together after defeating the vampire Queen Carmilla in the previous game (who is also Kagura and Saaya’s mother), the quartet find themselves facing a global threat that only they can defeat, blah blah blah. It’s not exactly 24, but it’s enough of a reason to chuck four women armed with swords and chainsaws at a horde of mutated zombies and over-the-top monsters. There’s not a great deal of finesse to Onechanbara’s kinetic combat, but it’s hugely cathartic at times. Each character has a combination of weapons and a ranged attack, all of which can be switched between on the fly. Additionally, hitting up or down on the D-Pad will cycle instantly between the four heroines, allowing them to finish one another’s combos. Once you get the hang of it and stop mashing buttons, there’s something fairly tactical and fluid to the whole affair which, when coupled with massive special effects, colourful magic and slow-motion evasions, comes across as pretty stylish at times.

If anything, combat has a few too many bars and cooldowns to worry about. For instance, killing enemies covers your blade in blood, which dulls it and reduces damage, so you need to switch weapons or refresh them by tapping R1. It takes a second, leaving you open, but otherwise it’s mostly pointless. There’s also a three-stage “Ecstasy” gauge filled by executing stylish chain combos, which unleashes a special attack, a bloodlust that increases as you kill and lets you Hulk out when it’s full, and a timer on your three allies who can join you when ready at the tap of the touchpad. If nothing else, it keeps you busy – and it’s a good thing too. Without the spectacle of combat, you can’t help but notice how horribly bland everything is. Ugly, featureless environments and identikit, low-detail enemies are offset in a terribly obvious way by the overly slick and well-animated protagonists, and they kind of have to be. Fast-paced combat is all well and good, but not when it’s really there to hide some of the most idle level-design I’ve ever seen. Although you jump between Peru, LA, Japan, China, and Dubai, you’ll see nothing of interest whatsoever. It’s shockingly bad, and if anything shows up just how much of the art budget went on boob physics and the swing of Kagura’s ass. It’s almost creepy.

The voice acting is fairly competent given the gibberish script, and it’s nowhere near as crude as you might expect. It’s all depressingly full of cliché, but it’s not really awful. The enemy AI is utterly dumb, though, and vast swathes of enemies will stand in line to be eviscerated as though we’re handing out points for orderly conduct.

Onechanbara Z2: Chaos isn’t a terrible game by far. There’s a therapeutic rhythm to its entertaining, highly-responsive combat that manages to carry it through, and the forced sexiness is more desperate than actually sexist. If any game embodies big, dumb fun, it’s this. With bells on.

A brainless slasher partially saved by a handful of good ideas and cathartic combat.