previous
The Evil Within: The Assignment Review
random
next
3D Out Run Review
0 likes 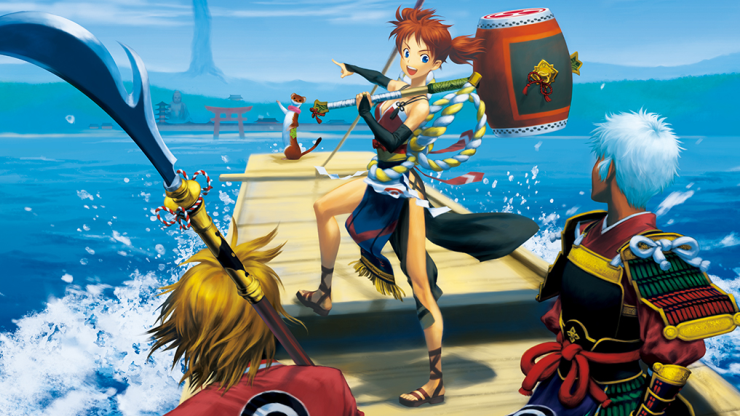 Alfa System’s decision to resurrect 1999 RPG franchise that never was Ore no Shikabane wo Koete Yuke, and provide a Western localisation for the sequel was certainly something that none of us laymen could conceivably have predicted. But behind the scenes the developers had been canvassing opinions from fans of the original using various forms of social media to piece together a worthy sequel that combines fondly remembered elements of the past with all of the whizzy tech available to us sixteen years later. What both newcomers and long-time fans have been given is a pleasantly engaging dungeon-crawling role-player, which bucks a few trends and looks terrific to boot.

The story is certainly a heady old affair, throwing you into an intriguing yarn of ancient Samurai, driven by revenge and victims of wrongdoing, wiped out at the behest of a tricksy sorcerer, and resurrected to do right by their bloodline and basically kick some turn-based ass. You take control of an ever-rotating clan of these Samurai, beginning with an avatar of your own creation, with the concept of your bloodline the very clever over-arching premise that links together everything you do in the game. Your warriors do not stay with you throughout the entire game like in most conventional RPGs, and have a shelf life of two years. The game moves along on a month-by-month calendar, and each dungeon you enter is timed. It makes managing your party a highly interesting balancing act – just as Old Father Time sees our own abilities dwindle with old age, your characters’ stats drop the older they get. The cursed Samurai clan may be unable to procreate in the conventional sense – hence the Tainted Bloodline of the title – but in a system that borrows little bits and pieces from the likes of Persona, and even the mighty Fire Emblem: Awakening, there is a way to create some badass offspring. You do this by having liaisons with the Gods themselves using an XP system; you build up Devotion by grinding the hell out of the frequent combat and then get to bring forth a successor that inherits the traits and elemental characteristics of your departed warrior, with a little bit of celestial blessing thrown in from whichever god or goddess you decide to align with. It is a cracking system which may appear inconvenient and bothersome to begin with but soon becomes second nature. A bizarre rodent lady adds that sprinkle of JRPG craziness, and becomes a handy guide who helps meld the myriad inventory and in-game choices into something more palatable.

What of the combat itself? It is certainly very reminiscent of the classic Persona series, in particular the third instalment. You look after the actions of the clan leader, but get the option to dish out orders to your party based on a series of options, or allow them carte blanche to get on with it themselves. Mixing up your approach pays dividends here, as bossing the hell out of your family may lead to desertion and mutiny within the ranks. There are eight wildly different combat classes and a cool, easy to understand three-stat elemental system featuring your earth, wind, fire and water mainstays. Rather than level up on stuff like strength, defence and other familiar stats, Oreshika sees the actual elemental affinities level up. Depending on what kind of warrior you are using, there are two different planes of combat in a battle. Long range guys like archers will be at the back and can attack any of the bad guys, while those that do their best work in close quarters will be in the foreground, and only able to attack their enemy counterparts on the frontline. You may be in charge of your own party – but each enemy encounter also features a boss demon, the slaying of which allows you to win loot that is predetermined before each battle by a fruit machine-esque minigame. You can choose to grease the minor demons first before attacking the boss – but this way you run the risk of missing out on that sweet, sweet loot if the head honcho decides to flee.

Dungeon crawling is initially terrific fun, with some decent variation stemming from the fact that dungeons change depending on the month of the year. Later on in the game you are challenged to defeat certain dungeons, using a particular character, during a specific time of the year. Fail, and you have to wait another in-game year before being able to attempt it again. Given the quite high difficulty of some of the boss battles in the later dungeons, this appears a bit of a bonkers choice in design terms, that could have easily been avoided. The flaws can be forgiven thanks to the superlative art design and the way that the bloodline mechanic lends a degree of emotional investment to proceedings. As you move through the game, the fortunes of your clan are also recorded in a beautiful family tree, reminding you of this fact. There are some other nice touches – like being able to venture online and enter into marital union with Oreshika-playing friends to mix up your bloodline a little. The character creation system is pretty beefy as it is – but you can also mix things up by basing a character on your own face thanks to the Vita’s onboard camera, if that is your kind of thing.

Oreshika is an excellent value package, and perhaps the truest example of a dungeon-crawling RPG available on Vita.

A solid dungeon-crawling RPG with enough inventiveness to keep you entertained for a fair while.