Shadow of the Beast Review 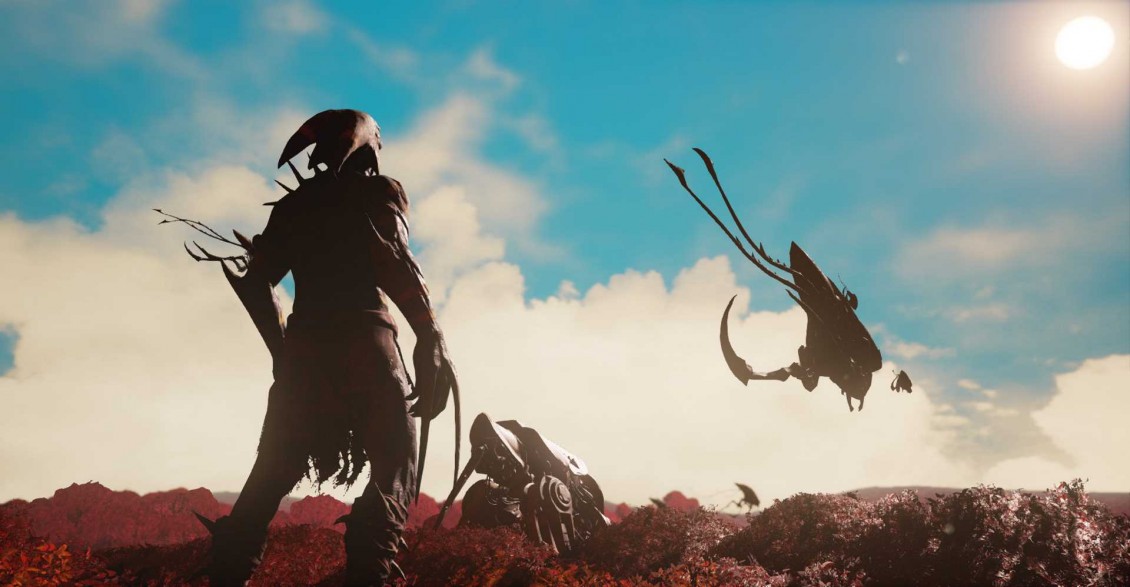 Waltzing with your enemies and painting the ground with blood; Shadow of the Beast is about linking your attacks and making each strike as precise as you can whilst watching viscera fly across the screen like a flock of birds. There is an art to decimating your foes and a satisfaction in doing so without receiving so much as a scratch which makes it a worthy successor to the 1989 original.

You play as Aarbron (who looks like a mix between Khal Drogo, the Cheshire cat and a Xenomorph from Alien), a hideous beast stolen as a baby and forced into a life of murder by a mysterious evil. After an awakening, Aarbron wants revenge on those who wronged him and that’s where you come in; as you make your way through the morbidly beautiful landscapes, you’ll come across a plethora of uniquely designed enemies and bosses, tasked with killing them all.

The combat is straightforward enough and you’ll become quickly acquainted with the basics. There are four main commands you’ll use in a fight and using them at the right time will allow you to build combos and earn points to spend in the Wisdom of Shadows (more on that later). Taking down waves of enemies with choreographed strikes, stuns, blocks, and throws provides an elegant fluidity of death and a great satisfaction when successful. You can also acquire wraith attacks which summon twenty or so spikes from the ground to cover a wide space, killing any enemies in their way. It isn’t as simple as bashing buttons either because there are enemies you can’t simply attack head on. Some have shields you’ll need to get behind and others launch themselves at you, requiring you to stun them before ever landing a claw to the sternum, and each of the bosses are completely different to the last – it’s a fine achievement by Heavy Spectrum. Every foe you battle brings something new to the table and the combat never becomes laborious or tiring.

Blood is the currency of battle and the more kills you rack up, the more your blood meter fills up. Having a steady flow of blood means you’ll be able to perform special moves by combining basic moves with the R2 button, and if your blood gauge is full the rage chain mechanic can be used by pressing R1 and L1 together, which lets you take down a lot of enemies one after the other by pressing square at the right time. If you are too early or too late the chain will be broken and you’ll have to fill the gauge once again. It’s a great addition to combat and when you’re faced with 30 or so enemies, the rage-chain becomes vital.

There are some other nice little touches to each of the stages like summon seals, shadow realms, and prophecy orbs. Summon seals can be broken in order to unlock the chance to buy talismans. Shadow realms are entered when you come across the remnants of other players in the world and you can give them gifts or devour their souls for additional bonuses. The prophecy orbs can be broken by your wraith attack to unlock fancy little cinematics which build on the story, and help to provide a little more depth. The Wisdom of Shadows is where you’ll spend your hard earned points on upgrades to your attacks and health, talismans which offer special abilities and other advantages to combat. You’ll also be able to buy forbidden tomes that’ll unlock the ability to translate some of the various characters’ languages. In some of the shorter cut scenes, enemies will speak and you’ll have no idea what they’re saying to you, so being able to understand their common tongue will give you more context to the story. There’s also a bestiary where you can read up on the various monsters you’ll encounter as well as yourself and other enemies like the evil mage Zelek.

One of the coolest things you can unlock is the original 1989 emulation of Shadow of the Beast and once you have it, you can play it as much as you want. You can also buy the original game’s music, artwork, and an interesting retrospective to indulge in. It’s a nice touch, but it’s painfully slow so the nostalgia of the original is definitely better than replaying an almost 30-year old game.

Shadow of the Beast is a great 3D side-scrolling platformer. I thoroughly enjoyed the diverse array of enemies and settings, with boss fights being an absolute highlight. If you’re old enough to remember the original you should definitely revisit and if you’re new to the series it’s still worth playing.

Review code provided by Sony.
Liked it? Take a second to support GodisaGeek.com on Patreon!

Story is vanilla
The original is painfully slow

A surprisingly fun platformer that’ll keep you hooked with its fluid combat and varied boss fights.