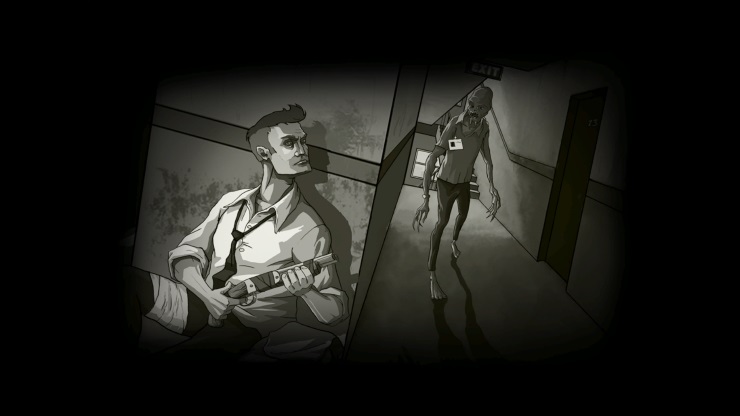 A short business trip sees you checking in at Skyhill Hotel, a luxury 100-floor establishment. On company expenses, obviously, you take to the high-roller VIP suite on the top floor to spend these few days in style. The World War (III) is over, but a biological weapon has struck the city, rendering the inhabitants of the hotel who weren’t in the bio-defended VIP suite (and presumably the whole city’s inhabitants), as mutants. Some people may have escaped the grasp of the mutagen, but there’s no way to know for sure. So the adventure and fight for survival begins.

While Skyhill is technically a roguelike game, it feels slightly different due to the fact that there is no diverging path through the “dungeon” that is Skyhill Hotel. You start at the top of the hotel in your suite – which becomes your home base, complete with upgradeable elements – with the goal of getting to the ground floor. Each floor is laid out the same throughout – at least to the 50s and 40s that I’ve seen – and has a total of three rooms per floor. I’m including the stairwell in this, because it’s a room that can spawn monsters and also sometimes items. The random generation of the floors only control what is spawned in each room and whether or not it’s locked. For the most part you will be looting the base items for various crafting combinations, but when it comes to weapons these can be wielded in their rudimentary form and later combined with other items to create a more powerful weapon. Alongside this, you’ve got to deal with a hunger bar that will slowly deplete as you wander around the hotel. As with the weapons, you generally find yourself picking the base ingredients that you can combine into a more fulfilling meal; however, you will come to a point where you will have to use these to survive, since you won’t always find the correct foods to put together. Painkillers and bandages are dotted throughout, but in true survival game style you will not find these in abundance.

Crafting can sometimes be done simply when you have the items in your inventory to complete the recipe, but with more complex items such as weapons or higher tiers of ingredients this requires you to go back to your base on the 100th floor. If you’ve been going down each floor and ignoring the power boxes that are along the way, this will mean you’re going to have to go back up manually.

As you progress through the hotel listening to the out-of-combat music that feels as though it’s been taken straight from This War of Mine, the types of mutants you’ll face will ramp up quite drastically. At first you fight large mutants with slavering maws and fairly harmless attacks, moving onto more humanoid mutants wielding weapons, and onward still to several different mutations. Watch out for the bellboy: he’s become a mean looking serpentine creature, and he hurts! Combat is turn-based, click-and-wait for the most part, but you have the option to make targeted attacks in specific areas of the mutants’ bodies for higher damage and higher risk of missing the attack. Overall the combat is fairly simple and won’t take long to grasp. You swing and either miss or hit for x amount of damage, and then the enemy attacks. When you die, you will have to start again. The Roguelike element of having something carry over as a trace of previous existence is in the perks you unlock that offer various bonuses and boosts. For instance, the ability to pick open locked doors that sometimes spawn on a floor, or always having the first attack against an enemy to take away that “initiative” style of deciding who will strike first. These will make the following game slightly different since some also offer a bonus in only one situation, but a deficit in another.

If you enjoyed This War of Mine and point-and-click style gameplay, you may get a few hours of enjoyment from Skyhill. This, however, is likely to be all you’ll get from it. The fact that you’re in a hotel with exactly the same layout all the way from top to bottom is a limiting factor. The random generation of items and mutants doesn’t really offer enough of a variety to keep playing. It’s certainly got some pull, since I played it through several deaths and retries before I came to the conclusion that I was always using the same perks and had started following the same pattern of exploring each room from left to right on every floor.

It had the potential to be a really interesting game, but sadly in this case less is most definitely not more. There’s just not enough here to allow for more than maybe two or three hours of enjoyment – which is very little considering the dollar tag on Steam.

A roguelike survival game that sadly squanders its potential with a general lack of variety.