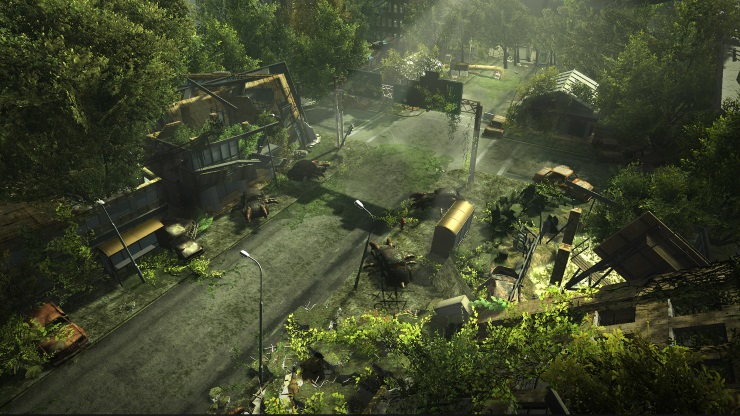 After the success of the huge and complex Wasteland 2 on PC, developers InXile set themselves the monumental task of porting it to PlayStation 4. Not only have they done a great job, it also fills a gap in the PS4’s repertoire you probably didn’t even know was there.

An isometric, turn-based strategy RPG set in post-apocalyptic Arizona, it follows the exploits of the Desert Rangers, a group of self-appointed peacekeepers who make it their business to settle disputes and protect the innocent from the horrors of the new world. Unfortunately, the Rangers have fallen on hard times of late, losing the trust of the common folk, and must work even harder to preserve their once glorious name.

A surprisingly effective live-action intro sets the scene perfectly, showing the Rangers as the beleaguered, often aging veterans they are in a dust-blown world of mutants, bandits, radiation, and hollowed-out cattle skulls. From then it’s on to the party creation, and InXile waste no time in plunging us into the deep end. While you can select your squad of Rangers from a handful of preset models, it’s much more fun and immersive to create your own from scratch. You select everything from gender and religion to appearance and skills – you can even write a biography for each once if you choose to. There is a huge spread of skills, split into Combat, Knowledge, and General categories. You’ll start with enough Skill points to select as many as six starting abilities, but you’ll want to focus on no more than three or four per character at first to maximise their effectiveness.

The enormous selection features very few duds, if any, and even seemingly innocuous skills like “Toaster Repair” are useful out in the world. Other skills work well together, such as Perception and Demolition, which will allow you to locate and disarm mines. Alarm Disabling, Computer Science, Animal Whispering, Bartering, Weaponsmithing, Field Medicine… all these skills play an important part of wasteland survival, and you’ll have little choice but to sacrifice a few here and there to make proper use of others.

Combat skills are essential, but the massive choice can be overwhelming here, too, and there’s a definite pros/cons factor to deciding between ranged or melee specialties. A great deal of Wasteland 2 is dynamic and there are often multiple ways around a problem, so it’s hard to call any choice “wrong”, but there are certainly options that will make it easier. You can also select a quirk for each character, which usually have a negative effect as well. For example, one quirk in particular allows a character to heal others with increased effectiveness, but he or she cannot heal themselves at all. Finally, there are attribute stats to consider, such as Strength, Speed, Luck, and Charisma (the latter of which is a group stat that creates an average likability factor based on your entire team). It’s dense and immense, and although the tooltips explain a fair amount, it’s easy to feel overwhelmed by the character creator. Once out in the world, Wasteland 2 becomes slightly more straightforward – which really only means it’s less blatantly bewildering. Your first task is to investigate the death of “Ace”, a famous Ranger, and complete his mission, which is to repair two radio towers in two separate settlements. One settlement, Highpool, is a town overrun by bandits, while the other, Ag Centre, is a research lab beset by mutant plants. You have to make a choice immediately over which town to visit first, and the choice has very clear and damning consequences. It also gives you your first example of how Wasteland 2 tells its story: it’s your story; you dictate it by your actions, and it unfolds at your pace.

You’ll switch between a local and world map for travel and exploration. The latter of which is out in the desert, where you’ll have to watch your water reserves so you don’t dehydrate, while dodging radiation spikes and random encounters. There’s a cool little animation when you find somewhere new, which is indicative of InXile’s creation as a whole. There’s always a diamond in the rough, there’s always a ladder out of the hole, there’s always beauty to be found amidst destruction.

The local map is more exciting, obviously, as this is where the action takes place. In between exploring every nook and cranny, digging up treasure and picking locks, cracking safes, hacking computers and repairing damaged tech, you’ll be fighting for survival against the horrors of the Wasteland. Giant insects, bandits, cannibals, mutated animals, robots and killer plants. Combat is strategic, turn-based, and always tense. Each member of your Ranger squad has a set number of Action Points determined by their stats, skills, quirks, perks, and gear. Every action drinks from this pool, whether you’re moving, attacking, healing, un-jamming a weapon or going into “Ambush” mode (essentially XCOM‘s Overwatch mode). The turns are decided by various factors, as is your percentage to hit. Combat ends when one side is dead, and, while the use of cover and specific skills is wholly tactical, it’s one of Wasteland 2’s more straightforward and less cluttered elements.

Your squad of four can be bolstered up to seven by recruiting companions in the desert, but they have their own personalities. Each has a “Rogue” percentage, which will occasionally cause them to ignore your orders, and there’s always a chance they could mutiny or abandon you. They’ll take whatever they’re carrying too, so be careful what you entrust to them. Some have their own storylines to delve into, while some are just hired hands, but you’ll need them if you want to succeed in the later fights.

You don’t always have to fight, though. You don’t always have to pick a lock, find a key or please all the people all the time. There is a great deal of choice, and there’s usually at least two ways around a problem. The conversation system is solid, allowing you to put points into the Hard Ass, Kiss Ass, and Smart Ass skills to open up new dialogue options, which in turn may open up new quests, rewards or conflicts. Wasteland 2 is gargantuan. The open world begs to be explored, while the story and scripting is fantastic. The whole experience is shot-through with dark humour (some of which is genuinely funny), as well as pop culture references, graphic violence, and foul language. It never feels gratuitous or immature, and there’s always something to do, somewhere to explore, or someone to kill. But it’s not easy going, and you can’t save in combat, meaning the occasional difficulty spikes might get you. It’s also not always easy to see what’s happening, as the screen so often feels cluttered with information.

The map isn’t very helpful as it doesn’t turn with you, and the tiny compass won’t help. With no minimap or quest tracking, there are moments when you feel a little lost – but it feels deliberate and mean, as though InXile wants you to fear the road you’re walking. It’s double-edged, though, and there’s a fine line between rewarding exploration and frustrating circle-walking.

Graphically, it’s a little too brown and drab at times, and the busy screen and uncooperative map are genuine issues, but the flip-side of the coin is a vast, immersive adventure filled with danger and adventure that mixes elements of Fallout with Baldur’s Gate and XCOM. One thing that is clear is that there’s nothing else like Wasteland 2 on the PS4 right now. It’s an old school challenge, abyss-deep and sprawling, that rewards your continued efforts with a real sense of accomplishment and progression.

A huge, sprawling adventure with countless branches and decisions, Wasteland 2 is unique in the console catalogue and more than worth the asking price.