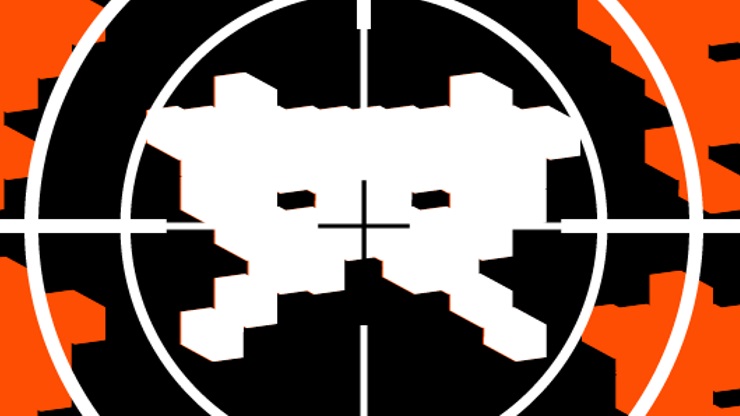 I get the appeal of retro games. I’m in my thirties, I’ve been gaming since I was around six, and like many others I’ve got some incredibly fond memories of retro games. I recently started playing PlayStation classic Suikoden again, and not long ago I ploughed into Rare Replay with quiet gusto. I get it. But I don’t get Bedlam.

Based on the novel of the same name by Scottish author Christopher Brookmyre, Bedlam tells the story of Hanna Quinn, aka “Athena”, a game developer zapped into 90s shooter Starfire by an experimental device known as the Neurosphere. She finds herself in a world of pixelated blood and circle strafing, trapped inside the body of an alien cyborg, initially fighting against an army of human invaders. Aided from within and without, Athena switches sides, soon realising that her fate is tied to the worlds she inhabits. Bedlam’s billing as “genre-hopping” is only really half-true. It’s always a first person action game, but Athena jumps from the sci-fi world of Starfire into the battlefields of World War II and various other locales, including a fantasy setting complete with magic swords, castles and fireballs. The references and in-jokes come thick and fast, but while the all-too-modern script (which even mentions Justin Bieber at one point) has its share of giggles among the one-line flops, it doesn’t quite gel with the action.

Part of the problem is the dialogue. A few of the jokes land, and when they do they’re hilarious. Accidentally decapitating a superior officer while trying to salute with a two-foot wrist blade attached made me chuckle, but some of the writing just isn’t good. Athena is incredibly foul-mouthed, which is no problem in itself given what her character is going through, but a lot of the other characters are, too, and some of the swearing feels forced. An alien cyborg sergeant calling someone a “fetid Slurg’s scrotum” has no context and just sounds silly, but you get the sense that the use of the word “scrotum” is supposed to override such concerns with its innate comedy value. It doesn’t. The other major problem is the game itself. Starfire, and by extension Bedlam, is not very good. Sure, it’s aping stone cold classics like Quake and Goldeneye, and it’s deliberately designed to look and play exactly like a PS1 shooter, but that would work better if it was of a similar quality to the games it’s based on, and it simply isn’t. It’s drab and ugly, which you could also excuse, but game design has come along way, and surely a modern studio could create a more fun experience and then give it a 90s skin, rather than build something that feels like a game you deliberately forgot about.

The level design is uninspired, and everything looks the same in a given stage, leading to frustration as you run around identikit corridors looking for the way forward. Enemies come at you with 90s stupidity, waiting to be shot, and aiming is a chore. Guns feel like pea-shooters for the most part, and all you can do to avoid enemy fire is strafe and hold Circle to duck. The first boss gave me serious trouble because I just couldn’t avoid his fire long enough to return my own, and it just wasn’t fun to play. Sadly, it never really became fun.

And this, of course, is the main issue. This is not a modern game. It’s not even a modern version of an old game. This is a game designed very recently to deliberately contain all the things we’ve gladly left behind: ugly graphics, stupid AI, ineffective guns, a lack of direction, uninspired level design, premise without context. That Bedlam has intentionally created this doesn’t change the fact that it’s stuff we left behind for a reason. Maybe I’m missing the point, but it feels as though this all seemed like a really original idea on paper before it was made, before all the originality was intentionally removed.

The simple truth is that if you’re a big fan of retro shooters, you have enough retro shooters to play and the classics like Goldeneye, Perfect Dark, Quake, Doom, Halo: Combat Evolved, Killzone – the list goes on, and they’re all better than Bedlam. It’s more a misfire than an outright failure, as the quirky comedy does have its moments and Athena is a likable protagonist – and what it sets out to emulate it emulates fairly well without ever managing to surpass. It’s just hard to advise anyone to spend money on Bedlam unless you really, really like retro shooters and you’re bored of all the other ones.

Looks bad.
Not as good as real retro shooters.
Not fun enough.

A faux-retro shooter with an irreverent sense of humour, Bedlam is hard to recommend as anything other than a curio, despite its popular source material.