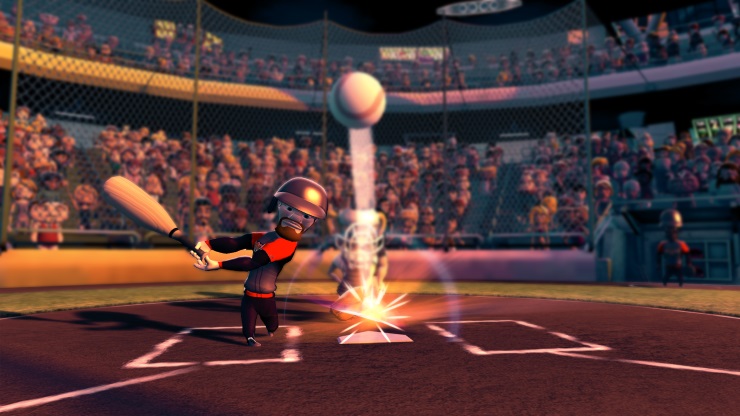 In a world were realistic sports sims are pretty much your only option for a sporting fix, it is refreshing to see a company come along with a game that doesn’t take itself too seriously and is just fun to play. Super Mega Baseball takes the core elements of baseball that everyone knows, adds in some simple controls and a surprisingly deep season mode to offer an easy to pick up (but difficult to master) experience that is simply lots of fun to play.

Unlike its simulation rivals, Super Mega Baseball requires no knowledge of the sport outside of knowing you have to hit a ball and run around some bases – and even if you don’t know that, it would be incredibly simple to pick up within the first two minutes. The most complicated of the game rules include balls and foul balls (which are both fairly obvious), and a basic understanding of the game structure (innings) is always helpful but not required.

While on the field you have three main roles. Batting involves moving the aiming reticule to the ball flight path, then tapping a button at the right moment or using the right analog stick to pull the bat back and then power through the ball at the right moment. Once you hit the ball you can control runners (either telling them to turn back, or head to the next base) with the triggers. There are a few issues present, such as the inability to force a player to slide for a base. It appears that this is AI controlled, but there were been a few times where I thought sliding would make me safe, but the AI refused to do it. Pitching is slightly more complex, requiring you to aim and select the pitch type, before moving a reticule to the final pitch location and pressing A. There is a lot of variety to the pitches you can throw, from simple fast-balls to spinners, and the ability to try and fake out a strike with an intentional ball.

Finally, there is fielding, which is perhaps the most simplistic element of the three. Each player has the ability to jump or dive to reach the ball, which is controlled with the shoulder buttons. Players will enter a slow motion view if the ball is heading in their direction to give you a realistic chance of making a catch. Throwing the ball to a base involves pressing the button that corresponds to that base, so first is B; and second is Y (and so on). It’s a system that works well, and despite taking some time to get used to the controls, it’s one that is easily understandable.

Two game modes are on offer: simple exhibition play, and the more detailed season mode that allows you to take a single team across a season, playing multiple games, improving players with new coaching staff, and trying to come out on top. In this mode all matches feature nine innings, which means it will take a while to get through a season, but the player development and the wildly different teams you face will keep each match feeling fresh.

Disappointingly, online multiplayer has been overlooked, and instead, local multiplayer is present. Playing with friends is where the game really has the most potential outside of the season mode, as single exhibition matches wont keep you entertained for too long. One of the most disappointing areas is the visuals. Although the cartoon-like art style was clearly a design choice, a lot of models (especially the players) are not up to scratch, looking like they have come straight from an early Xbox 360 game. The bright colours and inventive stadiums help hide the generally poor visuals, though.

If you want to play a baseball game without having to know all detailed rules of the game or the ins and outs of MLB, then Super Mega Baseball is certainly for you. It’s great fun and is easy to pick up and play, but mastering all of the systems will take quite a while. The visuals and lack of online multiplayer are definitely issues that can easily be overlooked due to the sheer amount of fun you can have.

Some art assets could be better.
Control over runners could be more complex.
No online multiplayer.

A simple yet incredibly enjoyable Baseball game that doesn’t take itself too seriously.

Super Mega Baseball Coming to Xbox One and PC