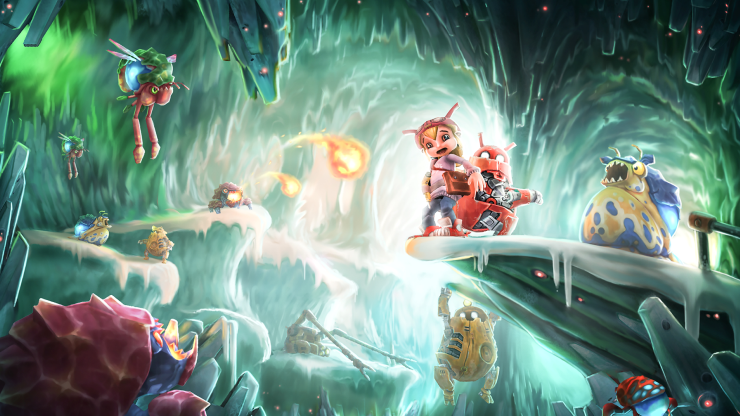 Underground is a game with a development story we have never seen before. Most games are created from the outset as just that: a game. Underground started life as a program designed to assist medical students learning key-hole surgery techniques. Yep, told you it was out of the ordinary. The developers saw game potential in the unique control system they had created, and hey presto, Underground was born.

Underground is a puzzle game that uses a quirky control system to guide lost robots through the various maze-like levels laid out before the player. Underground’s slightly vague story tells of an army of once-popular robot assistants, abandoned by their human owners to a life underground. You play as one of the more proactive robots, who has decided it has had enough of sitting around, and takes matters into its own hands, commandeering a piece of heavy equipment in an effort to free like-minded robots in a quest for freedom. The story is told entirely by dialogue free pre-animated cut scenes. These are lovely to look at, and tell a surprisingly heart-felt tale of a girl and her favourite butler-bot. Backed by a classical score and impressively handles visuals, the cut scenes are well worth paying attention to, which might sound obvious, but being a puzzle game, the fact that it has a workable story at all is a big win. The Wii U gamepad is used to control action on screen, with its two analogue sticks being the primary control mechanism. Each stick is tied to one of two on-screen mechanical arms, which extrude from the piece of heavy machinery our butler-bot friend nicked in the opening cut scene. The arms, much like the tools used during key-hole surgery, operate like extendable fingers. Fine control is required to put the arms in the correct place on screen to perform actions, like thawing out ice to free robots, or smashing rocks to free robots, or drilling holes to free more robots. Once freed, the robots walk, zombie-like, towards the levels exit. Think 3D Lemmings, and you’re on the right track.

Each of the on-screen arms can operate as a drill, welder, poker or grabber, and these options are selected via the gamepad’s touchscreen. As the freed robots continue on their death march through the level, obstacles will get in their way that you will need to deal with. Choosing the best path is important, as there are collectables on offer, and if you are anything like me, you will need all of those collectables if you are to get to sleep at night. Perfecting a level gets increasingly harder as Underground unfolds, with more and more challenges thrown into the mix to make life more difficult. Most of these come in the form of scary cave-dwelling, robot-eating monsters. These guys have especially long tongues and are out to get you. Underground, then, is a simple game on the surface, made more intriguing by its surgically inspired control setup. Does it work? Kinda. While the layout makes you feel like you are controlling the arms of a floating ship machine…thing, at times the whole setup just seems slow and clunky. The sense of depth (as in, how far away things are on screen in relation to your arms) is totally lost, so the illusion is scuppered most of the time. I can’t help thinking that this would be a great 3DS title, as a game like this would really benefit from an extra dimension.

Visually, Underground is nothing to write home about, which is forgivable for a downloadable eShop puzzle game. Some of the levels are genuinely pretty, with lava and water effects that are pleasing to the eye. There are some clipping issues, however, as your army of robots stack up into the same physical space as they catch up with each other. Is Underground worth picking up? Yes if you are a Wii U owner with a puzzle game itch you just can’t scratch with anything else. Those who are intrigued, or can even be helped, by it’s medically derived control system may be interested too. The clunky controls feel like they have been adapted from another purpose, and made my time with Underground more of a chore than a pleasure.

An interesting, quirky puzzle game that fails to thrill despite its uniqueness