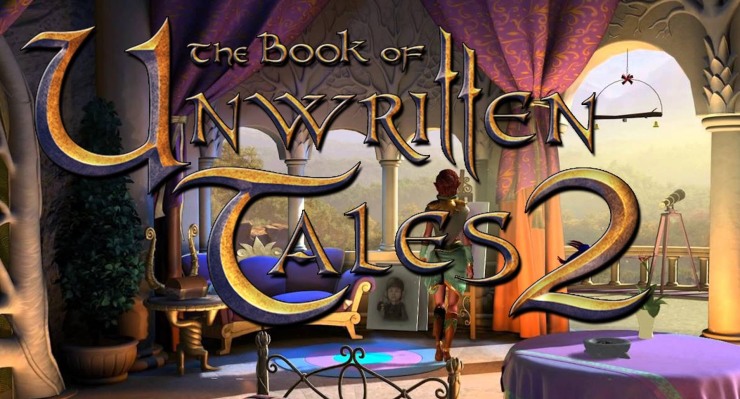 The Book of Unwritten Tales, developed by German studio KING Art Games, was a traditional point and click title set in the world of swords and sorcery. What made it stand out from the many cookie-cutter adventures on the market was the plethora of pop culture parodies and references contained within, and the genuinely witty dialogue. Central Europe has long been a hotbed for development in the genre, but many releases have been criticised for their poor localisation and humour that was inevitably lost in translation. The Book of Unwritten Tales was a pleasant surprise that marked a coming of age in this respect.

It is no surprise therefore that a sequel was put together. After the success of the first title, we had already been treated to The Critter Chronicles – a seemingly fast-tracked prequel following the exploits of the strange pink, fluffy sidekick of Nate the adventurer – but that spin-off didn’t reach quite the same heights as its predecessor. The Book of Unwritten Tales 2 is a proper follow-up, however, promising over twenty-five hours of playtime, more locations to explore than ever before and a return of the multi-character gameplay that allows players to hot-switch between the four heroes to approach puzzles in the order and method that they wish. We are thrown immediately into the action, playing the part of reluctant hero Nate as he falls perilously through the air, with nothing but the impending arrival of the ground to look forward to. His is a simple introductory sequence and after a few brief clicks and a short tutorial, we are into the story proper. Things pick up pretty soon after the events of the first title – with the evil goblins defeated – but our group of four heroes (Ivo, Wilbur, Nate and Critter) has drifted apart. Playing as elf Ivo to begin with, we learn that a strange epidemic is spreading through the world of Man. She must escape the confines of her Elven home not only to provide aid to those in trouble, but also to avoid her mother and an unwanted arranged marriage. Sadly, there is very little in the way of re-cap from the previous game, so newcomers to the series will likely find themselves a little lost to begin with.

Its real strength isn’t its fantasy-by-numbers plot, but the interplay between our heroes and the little nods to different adventure franchises that are scattered throughout. The heroes all bicker between one another, and break the fourth wall on numerous occasions, and the dialogue is actually very snappy and well-written. The writers are aware of the formulaic nature of the fantasy adventure, and play on the many genre tropes as they occur. Every film, book or video game that has the faintest whiff of fantasy is cannon fodder here, and one such early example is a rack of swords taken as war trophies, which consists of He-Man’s Sword of Eternia, Cloud’s oversize blade from Final Fantasy 7 and a typically pixelated Minecraft sword. Lord of the Rings, Game of Thrones and more get similar treatment as you progress through the story. Some references may go over your head or not quite hit the mark, but they keep coming so thick and fast that there are more hits than misses. As previously stated – for a localized script, KING Art have done an impressive job.

The gameplay is kept pretty simple, with intuitive context-sensitive cursors and a spacebar hotspot locator, making navigating and interacting with the environment an easy affair. The puzzle design is strong however, and whilst the puzzles themselves aren’t simple, they are well thought out so that they at least contain a modicum of logic. There is no in-play hint system, but the puzzles on offer aren’t the obtuse, bang your head against a wall horrors that plague lesser point and click titles. Even if you do become stuck, the fact that you can choose to switch between your different heroes at times throughout means that you can always choose to tackle a different obstacle instead, or try to face the same one from a different perspective. Sadly there is no branching storyline or alternate route to take, but the multi-character gameplay at least gives the impression of freedom and choice. The Book of Unwritten Tales 2 has had a healthy visual upgrade over the last two games, with character models most noticeably being far more detailed and expressive than before. Strangely, both Ivo and Nate seem to have changed very dramatically visually, which results in a bit of a disconnect from their characters but is definitely an improvement. Backgrounds remain lush and heavily detailed, creating fantastic and believable worlds for the characters to inhabit. It should also be said that the voice acting throughout is spot-on, and the delivery from the actors certainly adds to the impact of the comedy. The musical score is suitably bombastic and dramatic for a fantasy epic – even though The Book of Unwritten Tales 2 has its tongue firmly in its cheek, even at the most serious moments in its story.

Games that profess to be funny rarely actually are, but KING Art seem to have found a successful formula in poking fun at the influences they also so obviously admire. The Book of Unwritten Tales 2 is longer, prettier and has better pacing than previous titles in the series. Those who have already become enamoured with the band of mis-matched heroes will relish the chance to spend more time with them, and players who are new to the series will find a much more polished title that will draw them in with lavish visuals and witty dialogue. It may not present anything new to the genre, but it is an accomplished and immersive experience that all point and click fans should ensure they play.

Use our exclusive code (SAVE20-GODISA-GEEK20) to get 20% off this game at GreenManGaming.

A sequel that definitely builds upon the promise shown in its predecessor. A great combination of fantasy adventure and comedy.