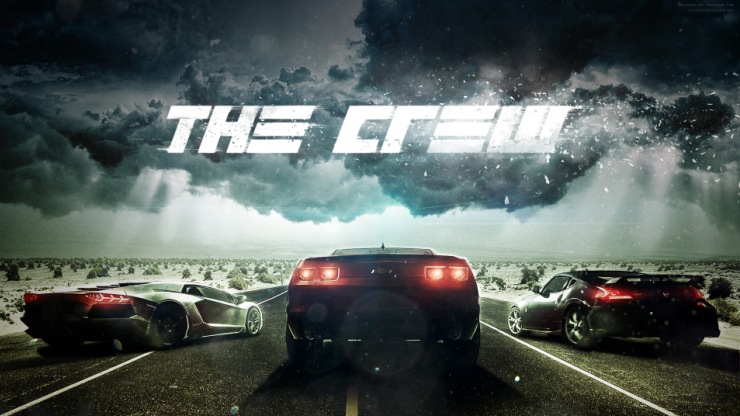 Ubisoft have had a busy 2014, haven’t they? 2014 feels like the year in which all of Ubisoft’s development arms have pushed out a game, covering the full spectrum of genres. The Crew is Ubisoft’s ambitious effort to take a slice of the racing pie dominated by developers like Turn 10, Codemasters and Evolution. Racing games in 2014 cannot constrain themselves to a handful of cars and a smattering of tracks – gamers expect more: they want sprawling worlds with a dizzying number of things to achieve. The Crew is the ambitious creation of Ivory Tower (they of Test Drive Unlimited fame), a developer with some experience of the open world racer scene.

There is a story in The Crew. In fact, it is a fundamental part of The Crew’s structure. There is no getting away from it: you have to take on campaign missions in order to progress. Ordinarily this would not be considered a bad thing. We all love a good romp, right? Well, in a racing game, if a story tries to extend itself beyond simply putting you in the shoes of someone who is trying to “be the champion”, you are asking for trouble. Why? Because pure racing games, by their very nature, do not really lend themselves to telling a compelling or involving story. These are cars, people. The guys driving them are faceless voices. Sadly, The Crew forget this, and its story is a stinker. You take on the role of Alex Taylor (voiced by Troy Baker), brother of a car gangster (who looks nothing like him) who gets himself murdered very quickly indeed, probably in a drug deal (it isn’t clear). Alex is on the scene as the police turn up within seconds of his brother’s pulse stopping. Alex is framed for the murder and spends five years in prison. Five years later an FBI bore turns up and suggests you join her crack team of driving knuckle draggers to infiltrate the car gang known as “The 510” and bring it down from the inside, in exchange for freedom. Alex accepts, and goes on a gloriously obnoxious tour of the USA, meeting many of the cretinous faces of the 510.

Before the above takes place, you are thrust behind the wheel of a pickup truck and told to get away from the police, for reasons unknown. You succeed, and this is when the painful story above is laid out for you. Within the first 90 minutes of The Crew, you spend about 20 of them actually driving, which given the content of the story, is fairly unforgivable. The rest of that time is either spent watching horrible cut-scenes or listening to the FBI bore prattle on about how to manage your “ride” and how to use The Crew’s enormous world map. The opening hour or so of The Crew is a mess, but what about everything after that?

The Crew, unlike this year’s other driving powerhouses Forza Horizon 2 and Driveclub, is an arcade-style racer. What does that mean? Well, if you have played either of the previously mentioned titles, you will know that they are hard edged, seat of your pants racers that require finesse and skill to see you beat the best. The Crew requires a more brutish driving style, with much of the handling taken out of the player’s hands and left to the physics engine. Honestly, after spending a lot of time honing my skills on the hillsides of Italy in Forza Horizon 2, getting behind the wheel of a Mustang in The Crew took a lot of adjustment. Getting a car round a corner at high speed doesn’t really require any skill at all here, you just charge full tilt at the wall, wiggle the left analogue stick a bit, and the car will put itself into a perfect power slide and dominate the corner. Simple. Get it a bit wrong? Just bash the boost button and be done with the opposition. There are four driving “types” in The Crew, Street, Mixed, Track and Dirt, and you will need a different car for each. The Mixed and Dirt modes are genuinely fun, with The Crew’s driving style shining in the more rugged environments of suburban America.

The Crew takes place in a GTA style micro interpretation of the entire United States. It can take somewhere between 45 to 90 minutes to drive from coast to coast depending on the route you take, with each of the included cities featuring a handful of the more famous roads and landmarks. A press of the menu button on Xbox One brings up the world map, with the various depicted cities strewn across the map, along with a dizzying array of race meets, PvP events and campaign missions – not to mention the modification garages, dealerships and other player locations. Knowing what to do next can either be seen as a challenge or a treat, depending on your point of view. Every mission or race can be taken on solo or, if you like, with other players in your session. I have tried numerous times to invite other players to my race, and only succeeded a handful of times. People either just didn’t want to race with me, or there wasn’t anyone around to race with. The Crew is being pitched by Ubisoft as a Racing MMO. Does your character level up? Yes, he does, there are levels for both your character and car, with XP being rewarded for driving style and placement in races. Does the game throw a ludicrous amount of loot and rewards at you for doing anything at all? Yep, you’ll be given parts for your car and performance boosts after every event, no matter where you place or how you do. Is your car/character customisable? Indeed it is, you can modify til your heart’s content, both visually and under the hood. Is the game always online? Yes, you need an internet connection to play, and your world is shared by other players. So, is this an MMO? Yes, absolutely. Right down to the rip-off prices in the Ubi store for most of the more awesome upgrades. Thankfully, most of these are visual upgrades, and the majority of performance upgrades can be attained simply by playing the game.

Visually, The Crew seems to follow a pattern often seen in games that try to create a massive world. The bigger the world gets the more the visuals slip into “average” territory. The Crew is technically brilliant; you will never see a loading screen as the world is just streamed from your hard drive, with the only halt in play coming when you choose to fast travel between cities – and even then there is only a momentary pause. From a purely physical perspective however, The Crew looks decidedly last-gen, with the only big wins being a bump up in resolution and some nice lighting when the sun starts to go down. The car models are all fine, but the world itself is restricted to a collection of house-shaped boxes, car parks and foliage that you would find in an Xbox 360 game. All of the car models are destructible, which is nice, however some of the damaged decals literally hang off the car to create a weird, unfinished optical illusion.

The Crew is a hard one to judge, since there is such disparity between its components. I found myself looking through my fingers at the screen at times, despairing at what was in front of me. At other times I was smiling from ear to ear at the pure dumb fun I was having power sliding a 4×4 round in the desert near Las Vegas. People willing to dig deep enough will find a lot to love in The Crew, but for a lot of people, battling through 9+ hours of fast and furious style teenage comic-book guff just to realise the potential will be too much to bare.

Massive world with loads to do
Lots of car customisation options

Terrible story
Too many microtransactions