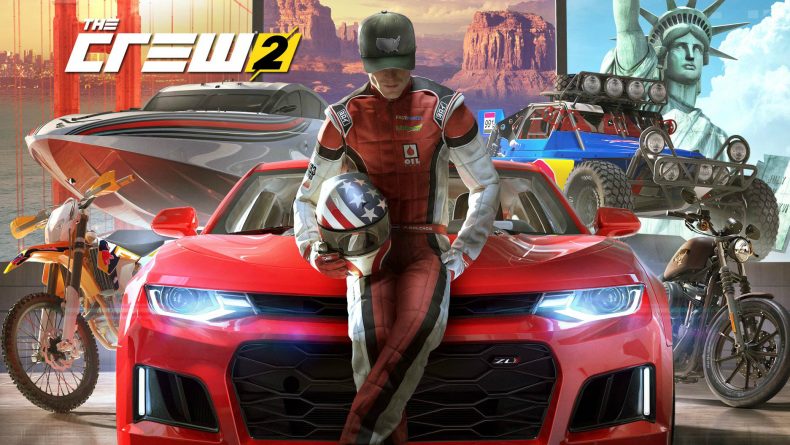 The Crew was a good game. There, I said it. My name is Gary Bailey and I enjoyed The Crew. I can’t take that back now, it’s out there on the internet and we all know the internet doesn’t forget anything. It’s like an elephant, only without the adorableness. The Crew had a silly story that wasn’t necessary, a handling model that was a mess when you went offroad, and some questionable AI; but it had redeeming qualities like an open world that spanned the entire United States, littered with events and minor challenges.

On paper, The Crew 2 should be a better game in every way. It removed the daft story, sorted the handling model and would likely improve the AI. Buuuuut no. It removed the story, sure, but replaced it with a different kind of story that tries so hard to be Forza Horizon, failing in every aspect. Instead of the dark, gritty story of revenge, we’re “treated” to some real Watch Dogs 2 levels of dudespeak, in scenes that only ever serve as a barrier to the actual racing. Thankfully, you can skip most scenes, but should you really have to? I get that Ivory Tower wanted to introduce this new brand of extreme racing, but when you’re still seeing these scenes hours into the game, you can’t help but just wish the game would shut the fuck up and let you race.

The handling is a huge improvement at least, as vehicles do actually work off-road, rather than sliding awkwardly and never quite feeling connected to any surface whatsoever. It still retains that feeling of arcade fun, but with a slight sprinkling of Project Gotham Racing’s arcade/realism hybrid handling, allowing you to throw cars around corners at silly, unrealistic speeds. But it’s not just cars and bikes this time. In a similar way to how Steep threw snowboarding, skiing and wingsuits together on one mountain, The Crew 2 brings together ground vehicles, boats and even planes in one big open world, with the ability to switch between your favourite of each vehicle type, on the fly. It’s quite impressive the first time you switch from car to plane, or when you switch from a plane at high speed, to a boat that drops right into a river. It rarely happens in actual races though, save for special events that unlock every time you reach a new popularity level. I think that’s a shame, because the whole Inception-style folding of the world, that was shown in all the trailers, is barely seen in the full game.

How do these new disciplines handle, you ask? The boats handle pretty well, though the game’s physics have left me in a bit of a pickle more than once, especially when I hit a jump and for reasons known only to the game, I splashed down pointing almost straight up, ruining my race completely. The planes don’t suffer from these issues however, but the sense of speed is totally stripped away, making flying the dullest method of travel in the entire game. Luckily, events featuring planes mostly consist of doing tricks, which is incredibly simple to do and almost always feels like the smallest challenge of the lot.

The biggest challenge in The Crew 2 comes in the form of the races; not because of any skill-based reasons, but because that absolutely dreadful rubberbanding makes an extremely unwelcome return. It’s entirely possible to run a flawless race, leaving your opponents for dust, only to find them suddenly reducing an eight-second gap in the blink of an eye, sometimes even overtaking you to earn themselves the cheapest of cheap wins. This kind of AI has no place in this generation of consoles, there is simply no excuse for it to exist anymore. It genuinely sucks the fun out of playing, half the time. It doesn’t help when those weird physics issues rear their ugly head either, as they’re not confined to boats; I lost count of the times when I’d hit an invisible object that either catapulted me straight up into the air, or stopped me dead in my tracks. What about outside of the events, though; surely that’s still fun? Well, yes, it can be. When you set up impromptu races with random players, or simply run into another group having their own tussle, things feel just as open as the first game. The world itself is still that huge US map, with real areas like Times Square and the Grand Canyon, not to mention places like the Laguna Seca Raceway which, although not really an accurate representation (the Corkscrew chicane isn’t even close to a proper drop, like the real thing) it’s still cool to be able to go race on it whenever you want. Ultimately though, this map seems to have been stripped of all those events and challenges that made the first game’s world so interesting to explore. They aren’t gone entirely, but there are so few that it almost seems pointless to play in Freedrive.

All this leaves me with two questions: now that you can fast travel to any event on the map and there are barely any challenges in Freedrive, why is this even an open world game now? And secondly, why are we back in the US again? I’m not sure anyone can really answer those questions, so I’ll leave you to ponder them yourselves. Either give us a reason to go exploring, or give us a new place to explore at least. Initially, I quite enjoyed my time with The Crew 2, but it has so many strange design choices (stop with the bloody cutscenes and dudespeak) and so many more little problems that just build and build until you just struggle to find enjoyment as you play. Instead of simply being rewarded with upgrades after winning a race, for example, they’re dropped onto the street in glowing boxes that you have to manually drive through to collect; then you have to pause the game and change out the parts, again slowing down the pace of the game. Let me say that for you again; a racing game that goes out of its way to bring things to a standstill.

For all its visual splendour (curiously, minus HDR on PS4 Pro and Xbox One X) and its wide open game world, The Crew 2 offers so little content that it’s difficult to recommend right now. Will it be another Ubisoft games-as-a-service entry that’ll be an entirely different experience in six months? Maybe. But can you really justify that, when you’re dropping £50 for a half-empty game at launch?
I sure can’t.

While it certainly improves upon the original in many ways, The Crew 2 is a step backwards overall. Its rubberband AI is some of the worst in recent memory and its version of America feels empty, not at all like Forza Horizon, the game it really wants to be.

The Crew Coast to Coast Trailer