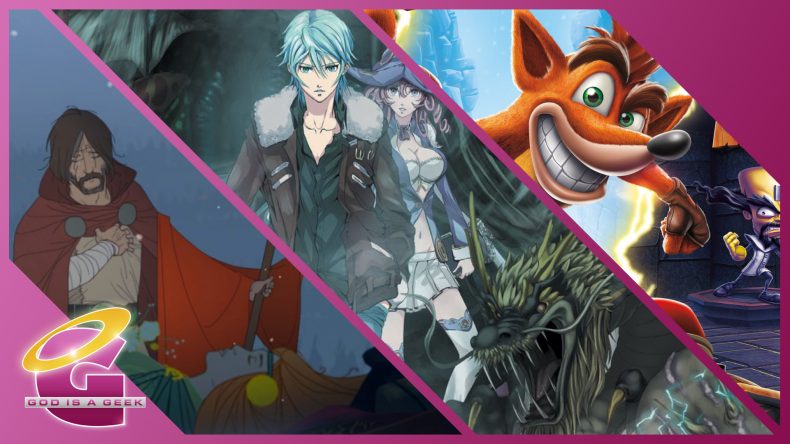 June 29 has a loads of Switch releases in Europe and a few really high profile ports. This brings us to Re:Port #21 which is the third one this week. If you’re new to the Re:Port format, I (and sometimes someone else on the site) write about my experience with a Switch game and talk about how the port is not just in performance and visuals but also using the Switch hardware and functionality. The games featured can be older games ported or newer interesting titles that deserve a feature. For this Re:Port, I look at the Crash Bandicoot N.Sane Trilogy which is the first time these three classics have hit a non PlayStation platform, Kadokawa’s new DRPG, and the follow up to The Banner Saga

Originally released on PlayStation 4 in 2017 and scored 8/10 Crash felt like a remnant of the past until E3 2016 began the hype cycle again and we got the original trilogy on PS4 remastered by Vicarious Visions and Activision. I never did play these games on the PS1 but spent a ton of time playing Crash Team Racing back then surprisingly. While the PS4 release is pretty great, being able to play these on a portable is something I’ve been waiting for. Before you suggest trying it out on Vita where the originals are available, I sadly cannot because my Vita uses USA PSN and the original trilogy isn’t playable on Vita there so this Switch port is the first time I’ve played these games on a portable as well.

The Switch port has all the content of the PS4 version and the two new levels that were released after launch. In terms of Switch functionality, you can play this docked or portable obviously and it has pretty good HD rumble for when you spin and for various in game feedback elements. There’s no touch screen functionality though. Visually, this ran at 1080p 30fps on PS4 and on the Switch it targets 30fps but the resolution is lower. It isn’t dramatically lower like some other ports but the overall image is noticeably softer docked. The lighting is different and some textures are lower resolution in comparison as well. The most noticeable visual difference is on Crash’s body. The fur is basically absent giving Crash a more plastic look or one similar to the original PS1 model in that regard. Portable mode has been great although the image quality is sub native again. If you do plan on getting it, I recommend playing this portable because it plays great and looks pretty good. For docked, I’d recommend getting it on another platform if you have the option. For some reason, the Checkpoint text or visual is super low resolution in both modes. I hope this is patched soon.

Overall, the toning down of some effects and lighting would have been more palatable if the image quality itself was good. The visuals look a bit too soft in both handheld and docked mode in the current state. Thankfully, I ran into no trouble playing the games on either mode and have been enjoying them. I think they hold up great and are a lovely addition to the Switch platformers available. NIS America has released loads of Kadokawa’s games in the West and in recent times, they’ve even started bringing them to Switch. The Lost Child is first person dungeon crawler RPG that has a very interesting premise and gameplay that borrows from the Shin Megami Tensei franchise. Gameplay is grid based in first person as you explore various dungeons and try and capture astrals for use in combat. There are visual novel story segments as well and while the narrative feels a little forced in some situations, it is a nice change from the usual fair for these kinds of games.

The Switch port for this release is mostly great. The one big annoyance is the cutscene quality. The pre-rendered cutscenes are noticeably low resolution. It almost feels like you’re trying to watch a YouTube video on a bad internet connection in some situations. The PS4 version has no trouble here and the file size for that release is double the Switch version. Outside of that, visuals are great and performance is good as well. Dungeons look pretty bland but that’s a problem that affects all versions of the game.

The Lost Child is a good dungeon crawler but there are so many better ones. Kadokawa’s production values shine with gorgeous character art, great music, and even the voice acting. I wish they had gotten Experience Inc. to do the actual dungeon design. It feels like a missed opportunity. If you’ve never played a first person dungeon crawler, this is a good place to start but there are far better ones available. In fact NIS America has published some of the best ones in the West in the form of Demon Gaze and Stranger of Sword City.

Originally released on PC, PS4, Xbox One, and mobile platforms and scored 9.5/10 The Banner Saga 2 picks up from the first game and you absolutely need to play that before jumping into this one. Originally hitting PC and console platforms before seeing a lovely mobile port (that plays best on iPad), The Banner Saga 2 hits the Switch. If you bought the original, you get a 25% discount on this release and you should get both because your save carries over here and decisions made here actually matter unlike certain other games. I’m not going into story details here because you can read our original review for it above but this picks up after the end of the original giving you a choice of two characters to begin with as you start your long and arduous journey where death is the biggest enemy.

Just like the first game, this port is great but it has a few technical issues. You have an option to play this with touch controls or button controls and as expected, the best solution for me is to use a combination of both. I used touch to pan the camera and zoom in and out while buttons for actions and movement. The Banner Saga 2 looks great in both handheld and docked modes with the gorgeous art shining on the Switch handheld screen. The technical issue is in random stuttering with camera movement or some load times being too long. These aren’t game breaking issues like RiME where things are almost unplayable but they are worth mentioning. Austin Wintory’s score here is again fantastic and worth the price of admission on its own.

Overall, if you bought the original and played it, you need this port. If you’ve played The Banner Saga on another system and want to get the sequel, the Switch or iPad version is my recommendation. These kinds of games are best on portables and the Switch even gives you the flexibility of playing on TV if you want to do so.

You may also like
crash bandicoot n sane trilogyReportReviews