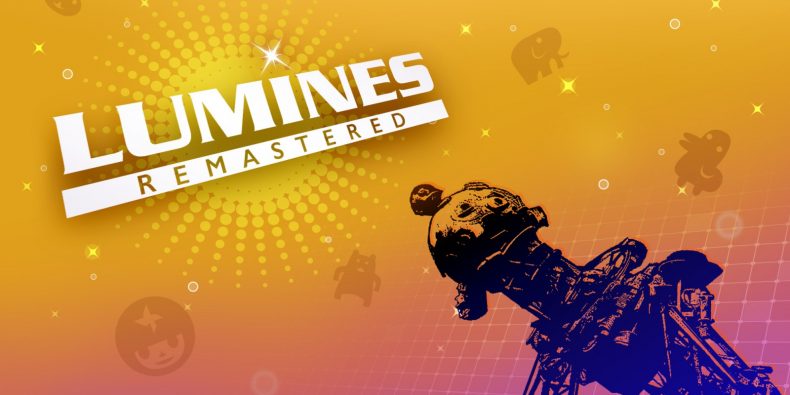 Considering what the world is like at the moment you’d be forgiven for wondering where the stress free games are. Considering that I’ve recently been banging my head against the double threat of Mario Tennis Aces and Splatoon 2’s Octo Expansion having a game to chill to would be incredibly welcome right about now.

Step forward Lumines Remastered – the game originally created by Rez genius Tetsuya Mizuguchi – a budget re-release of a classic zen-like experience designed to pull you into a world of rhythm and colour. The aim of the game is to create squares of colour from the two tone blocks that fall from the top of the screen, as a bar continuously passes from left to right full squares are highlighted and disappear; all you have to do is keep your screen clear for as long as you possibly can.

The textures and theming constantly change, the music changes in accordance with the looks as well, one minute you can be clearing blocks to a bouncy pop beat which would then give way to an ancient Japanese stylings before changing to a trance vibe with pulsing coloured blocks; while the action stays the same the way, it’s frame keeps the experience feeling constantly fresh and even though the changes can be stark they’re never off-putting or intrusive to the experience. As the patterns on the blocks change, you need to remember two fundamental things for your creation of squares. The first is that the blocks are not rigid if half of a block hits a block and the other half is above empty space then that part will continue to fall, allowing you to make squares further down the column. The other thing is that while you have to make squares you can make a larger mass as long as all parts of that mass are four by four squares. Think of it this way, remember those ‘brain teasers’ that people would post on Facebook asking “How many squares can you see in this picture?” it’s basically like that, and the more squares in your mass the more points you get.

This moves into the vs mode too, with both players (or player vs AI) making blocks to fight for dominance of the screen, matches keep your control but big collections move a line so you control more of the screen. I have to admit I don’t really like this mechanic as once you start to lose space to work in, it can be incredibly difficult to work in a constrained space. It’s also really irritating to line up a square at the edge of your area only to have the control line push your block off line just as you’re dropping it into position. The controlling player then gets much more space to work in and as a result can make squares much easier putting you on a hiding to nothing. There’s a bunch of other modes here just to give you a change of pace. You have Missions which gives you a task like clearing all the blocks, or just forming a blank column from an existing set, then there’s Puzzle mode which asks you to create a pattern like a square, or a dog from the blocks that fall. You also get a time trial mode where you just have to rack up as big a score as you can in the time allotted to you. Finally you have a skin edit mode where you can just play Lumines but with the game only switching between the themes you choose to use. After all this it can be felt that the offering is a little threadbare as despite these differing modes the game doesn’t feel any different when using them. But as a budget release this does represent excellent value.

There’s not really anything to dislike about Lumines Remastered, it is a fourteen-year old game, but it’s been prettified to within an inch of its life. If you’re not into this sort of game then it’s going to be hard to convince you otherwise, but for anyone who likes or even needs something they can play and essentially zone out to then this is a truly great experience. I wouldn’t really class the two player mode as fun to the point you’d want to play it with a bunch of mates round, but as a solo affair this is just the ticket after a long stressful day, or an evening after being forced to watch Love Island.

Lumines Remastered is a welcome return of the stress-free puzzler, turn on, tune in and drop out.