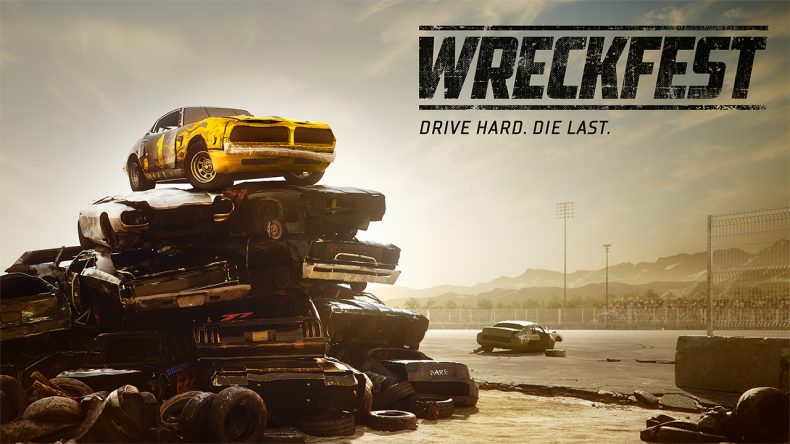 If you were around in the PS1 era (can’t believe I’m old enough that I have to write that) you might well remember the glorious Destruction Derby and its equally brilliant sequel. You might remember the excitement as you sat at the edge of a circular arena, awaiting the green light before twenty cars began driving towards the centre of the bowl and the carnage began. Now, imagine that again, only this time we have the benefit of 2018’s technology and visual power behind Wreckfest’s arena derbies.

Originally known as the imaginatively titled Next Car Game, Bugbear’s follow-up to the FlatOut series (the team had nothing to do with the abysmal FlatOut 4) was released on Steam’s Early Access platform in 2014; now we’re here in 2018, with the full PC release now available and it’s certainly an impressive sight. Look, there’s nothing wildly new or original about Wreckfest, but given that arcade racers are making a comeback of late, it doesn’t stop it being ridiculously fun. There are races on a multitude of surfaces, plus a few challenges sprinkled throughout the campaign, as well as vehicle upgrades and semi-realistic physics. Nothing new there, right? Even the arena destruction derbies offer nothing new, but they do highlight the exceptional damage physics and sheer chaotic fun at which Wreckfest excels.

You can’t just go charging into these arenas with “wreckless” abandon (I’m not even a little bit sorry), as within seconds you’ll end up looking like your car has just been through the crusher. Your car has a life bar of sorts, plus a kind of shield barrier, all seen via an icon in the bottom left of the screen; the “shield” is basically the outer layer of armour that you currently have installed on your vehicle (upgradeable between events) and the front, back and sides turn red as they’re individually damaged. Once they’re significantly battered, that layer will disappear, leaving the radiator, engine, etc. exposed and that’ll end your chances of a win, pretty sharpish. It was only when I noticed the AI reversing around the arena that I realised that sometimes you need to just think about what you’re doing, in order to win these events. It’s not all about the destruction though, despite the name of the game. Each tier of the campaign offers a range of different events, most of them race-based; in this, the game doesn’t impress any less. Throwing your chosen vehicle around each track is wonderfully simple, with various assists to keep every level of player in the game, feeling like a mostly offroad version of Project Gotham Racing. It’s not quite fully arcade, but it’s nowhere near a simulation either. It sits in that lovely space between the two, where the rules don’t need to be fully defined and fun is the main objective. Again, Wreckfest excels there.

For those of you that love a good race, each level of AI difficulty offers a good, fair challenge. You can aim to win every race cleanly if that is your wont, but you’re also encouraged to get stuck into your opponents from time to time. This usually comes in the form of optional objectives for each race event, ranging from the simple “win the race” to the more specific “wreck three opponents.” Honestly, sometimes forcing opponents off the track and into the barriers, or spinning them out, can really hinder your chances of winning a race as it tends to slow you down. This feels a little counterintuitive, but you’re never forced to do these things to progress; instead it adds that extra element of challenge for those of you that love nothing more than to smash your opponents to itty bitty pieces. There is none of Gran Turismo Sport’s etiquette here. On top of the races and destruction, you’ll find a few of the more unusual challenges awaiting you throughout the main game. One of my fondest memories came in the form of an oval race in a three-wheeled van, in which I had to get from last place to first in a set number of laps. Simple enough, I thought. Then I realised that my opponents were all buses. Yes, you read that right. Remember that Top Gear episode when they got ex-touring car drivers to race around in buses and they crashed into each other at every available opportunity? That’s exactly what happened in this Wreckfest challenge, only I had to navigate my way around these smashes. Let me tell you, I was not prepared for the wildly veering bus that plowed through my poor little van as I attempted to charge through the opening on the inside line. I didn’t stand a chance, but the resulting destruction had me laughing out loud. The same thing goes for the destruction derby in which everyone drove ride-on lawnmowers. If you don’t crack a smile when you see drivers ragdolling off of rolling lawnmowers, I’m not sure you’re even human.

Wreckfest is gloriously over-the-top at times, but thoroughly grounded at others. It’s this paradoxical nature that somehow makes the game appealing to a larger audience, with fans of the old FlatOut games catered for with the excellent racing; Destruction Derby fans should be overjoyed at what is essentially a new entry in the series; but most of all, there is something for every breed of driving game fan.

Arcade racers are seeing a resurgence of late and Wreckfest fits nicely into that sub-genre, bringing banger racing into the limelight and turning it up to eleven. It may not be named Destruction Derby, but the spirit of the old Psygnosis classic is alive and well in Bugbear’s latest racer.