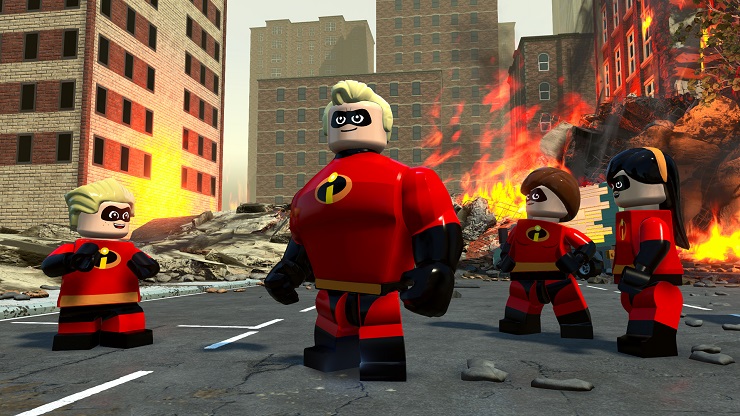 I love The Incredibles. It may well be Pixar’s finest film (fight me), with relatable characters that preceded the current superhero trend by a good four years. I would go as far as saying that The Incredibles is a better film than almost anything coming out of Marvel Studios (again, fight me). I also love a fair few of the LEGO games, which led to my immediate excitement at the announcement of LEGO The Incredibles, to go with my glee about ending the fourteen year wait for The Incredibles 2. Even if I do have to wait an extra month to see it, because of some silly sportsball tournament. Yes, I’m bitter about that.

If you’ve already played any of the core LEGO games, such as any of the Star Wars outings or the various Marvel or DC efforts, you’ll know what to expect of LEGO The Incredibles; follow a basic plot of the source material, all while smashing everything in sight to collect the various coloured studs contained within. Along the way, you’ll build a few things to help you progress and, after completing each level, you’ll have the ability to replay them in Free Play mode with all your unlocked characters, in order to mop up all the extras that cannot be reached in standard Story Mode. It’s a completionist’s dream…or nightmare, depending on your outlook. Strangely, LEGO The Incredibles doesn’t start at the beginning, with the 2004 film’s content. Instead, we begin with the lead into the new movie’s content; the Parr family chasing down the Underminer in an impressive showcase piece, trying to stop a giant runaway drill as it tears through the city. It never quite recaptures that sense of scale and action though, despite a few good levels throughout the game. This is more a sign of the LEGO games’ need for a new direction however, rather than a lack of quality within this particular title.

As has become customary for today’s LEGO games, between levels you’ll be able to explore the open world of Municiberg/New Urbem to find Incredibricks that allow you to build special Family Builds, which we’ll come back to in a moment. You’ll also be able to stop Crimewaves, which will pop up in each district, giving you several sub-quests as you attempt to stop a variety of villains and goons from destroying and looting each district. This reminded me a little of games like Spider-man 2 and the Batman Arkham sequels, in which you’d come across various crimes-in-progress as you travel around the city. Great times, and some of the best inspiration to draw from when creating a superhero game. Right, back to those Family Builds. Throughout the levels, you’ll come across giant Incredibles logos on the floor, barring progress; these require a set number of Incredibricks to be activate, usually found hiding in the nearby vicinity. These are very similar to the big builds seen in LEGO City Undercover, as they’re much bigger than the standard builds seen in the rest of the games, resulting in things like giant crossbows and buzzsaws. Trust me, they make sense when you see the context behind them. These bigger builds appear throughout Municiberg too, though the standard ones don’t really offer too much as a reward for finding the hidden Incredibricks needed to build them. You might be wondering why I’m telling you about them if they’re of no real consequence, but I haven’t got to the best part yet. Sheesh, so impatient. Those Crimewaves I mentioned earlier? Completing those will unlock a special Pixar Family Build within each saved district; unlocking special characters such as Dory, Merida, Woody and even Lightning McQueen, to name but a few. Each one of those characters’ builds are related to the movie too, such as Russel from Up; his build is Carl’s house, in which you can even trigger the balloons to come out of the chimney and earn yourself a red brick.

Unlike previous LEGO games, this game’s red bricks are far more common and easier to unlock. For example, I very quickly unlocked the red brick that gave me the 6x studs reward, making the quest to get each level’s True Super status (when you collect a set number of studs) that much easier. LEGO The Incredibles seems to be a lot more streamlined than others, perhaps owing to the fact that it’s based on a prime Disney IP, and that is reflected in the overall level design too. It’s very rare to find yourself stuck in any of the story missions, because everything feels better directed, as the camera gently focuses on your destination. Although it still sometimes outright points you in the right direction, but this is a game designed for young children as well as fans. It’s a Disney game, after all. That said, Family Builds are a little irritating, as they involve up to four characters and you have to keep tapping the Circle button (on PS4) to get each one’s meter to the top and keep it there, but they do begin to drop once you move to the next character. It’s not difficult per se, just a little unnecessary having to juggle all those bars. You know what, though? LEGO The Incredibles does an, ahem, incredible job (I’m so sorry) of recreating the look, feel and content of the movies. When I got to play the opening of The Incredibles, with Bob and Helen fighting crime on the way to their own wedding, I couldn’t wipe the grin from my face. The lack of the movies’ real voices is a bit jarring at times, but it’s not a deal breaker, thanks to some decent soundalike voice acting. They even manage to nail some of the humour too.

It’s true that these core LEGO games are growing a bit tired in their execution, with very few new ideas being introduced with each instalment; but then, it’s not always about us adults, is it? Too often we forget that the younger generation sometimes enjoys the comfort of playing the familiar (actually, we all do) and TT Games is still delivering high quality games that are, LEGO The Incredibles included, chock full of content that will last for many hours beyond the end of the story levels. I, for one, am just happy to have the Parr family back in my life.

With content from both movies, plus a tonne of extra stuff included in a fun open world, LEGO The Incredibles offers a great adventure for fans of both the Pixar franchise and LEGO games. For everyone else, it may show that the LEGO games are growing a bit tired.

LEGO® The Incredibles is official – launches in July