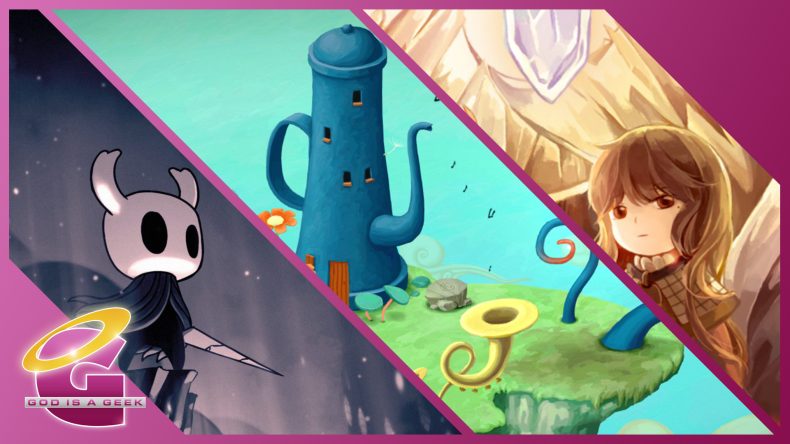 This week is full of Re:Ports and you probably have noticed that the number of games is slightly less than usual in each of them. Basically I’ve wanted to stick to a minimum of three games per Re:Port so that’s what is happening here. If you’re new to the Re:Port format, I (and sometimes someone else on the site) write about my experience with a Switch game and talk about how the port is not just in performance and visuals but also using the Switch hardware and functionality. The games featured can be older games ported or newer interesting titles that deserve a feature. For this Re:Port, Chris joins in with a review of the Switch version of Figment while I tackle the fantastic Hollow Knight and the music game that charmed me, Lanota. I missed the opportunity to play Figment when it was released on PC last September, and ever since I’ve been waiting for it to arrive on the Switch. I was instantly taken aback by its charm, its emotional storytelling, and its imagination. After a traumatic opening I wasn’t expecting, you’re taken to a world that exists inside someone’s mind. You play as Dusty, a rather cynical little chap that reminded me of Bender from Futurama. A mysterious creature known as Nightmare steels your scrapbook and it’s up to you to chase him through different locations that all share links to the human mind – think a darker version of Pixar’s Inside Out. There’re constant parallels between what you see on your travels and what the characters say to actual processes of the brain, and the writing on show is incredibly smart. The story is engaging and full of tear-jerking moments, as well as humour and delightful encounters with the residents you never actually meet.

The combat is simple; you’re only means of attack is pressing Y to attack and B to roll. The enemies you fight have different approaches to attempting to kill you, and by mixing up when to roll and attack gives you some variety throughout. Puzzles are relatively simple, never causing to much stress, and it’s very clear the focus is on the journey that the gameplay.

It looks gorgeous on the Switch, both in handheld and when docked, and all of the gorgeous artwork stuns with every scene. It is the music, however, that stands out amongst everything else. Each boss has a song to accompany it, and every song in the game is catchy, with great lyrics that compliment the writing of the entirety of Figment. I adore this game, and with the ability to take it on your travels I’d highly recommend you play this now. Hollow Knight is a game I always paired with Stardew Valley and Undertale. Games that had a ton of discussion and praise for the PC versions before jumping to consoles later on. While both Stardew Valley and Undertale made their way to consoles a while back, the wait for Hollow Knight was super long. Team Cherry dropped a surprise release after Nintendo’s E3 direct alongside Fortnite, and the wait has been beyond worth it.

I actually caved and bought it on Steam and loved my time with it. As with most indie games, if a handheld version is planned, I drop the home console or PC version and begin the waiting game. Hollow Knight is full of adventure and exploration and the story unfolds slowly as you play more. When it comes to production values, Hollow Knight already blew me away on Steam and the Switch version reminded me of just how polished the game is. It has some mechanics from Dark Souls and gorgeous hand drawn art and slick animations.

The Switch version is excellent but there are two main issues with the port in its current state. The image quality when docked or played on TV is softer than it should be. I understand reducing IQ for hitting 60fps is more important but this is something to keep in mind if you play docked. In handheld, it looks great and runs great. The only issue that affects both modes is load times in between areas. These aren’t super long but they are noticeable and hopefully patches can bring these down a bit.

Overall, the game itself is a must play on Switch. It includes all content released post launch for the PC version right from the get go. Team Cherry has done a superb job and once those issues are ironed out, this will be a perfect version of a fantastic game. Music games from mobile jumping to Nintendo Switch isn’t anything out of the ordinary at this stage. In fact it is safe to assume that any seemingly popular mobile rhythm game will likely get on the Switch wagon in the near future given the success many titles have enjoyed so far. Lanota from Noxy Games and Flyhigh Works is yet another music game ported to Switch from mobile but this one has a lot going on to stand out from the crowd.

Lanota is a rhythm music game with some great storytelling and absolutely gorgeous art. In fact this maybe my favourite music game ever when it comes to visuals and art. Unlike others that have notes floating down from the top and having you tap a bar at the bottom, Lanota sees you tapping notes that move outward into circular arcs that are moving. You obviously have to tap, hold, or swipe depending on the situation but this port is all about the touch screen. In fact it is another one of those handheld or portable mode only games so if you play only docked, look elsewhere for your rhythm fix.

When many fighters or music games feel like the story modes are an afterthought, Lanota is a breath of fresh air with the narrative fitting in brilliantly with the gameplay and more so than even Deemo for me. While the mobile port is paid and has in app purchases for more unlocks, Lanota on Switch is a single purchase with 2 exclusive songs and 70 songs in total in its current state. It is a polished and fun rhythm game that I can safely recommend to any fans of the genre. I know it is unlikely given the interface but I’d love for a control option for docked mode players to be added in the future.