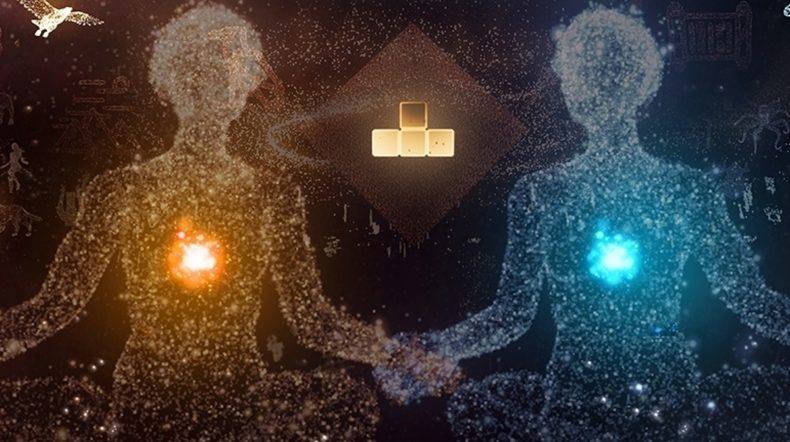 I originally played Tetris Effect on PlayStation VR. Cathartic and spiritual, it became not only the best game PSVR had to offer, but the best version of Tetris of all time. Created over 37 years ago, it’s amazing how Tetris can still be relevant in today’s busy video game market. Everybody knows what it is. It’s a staple of gaming history, but even now, something so simple and so old can become an entirely different experience. Tetris Effect: Connected is finally available on Nintendo Switch. Released late last year on Xbox consoles and PC, the handheld masterpiece has finally come home. 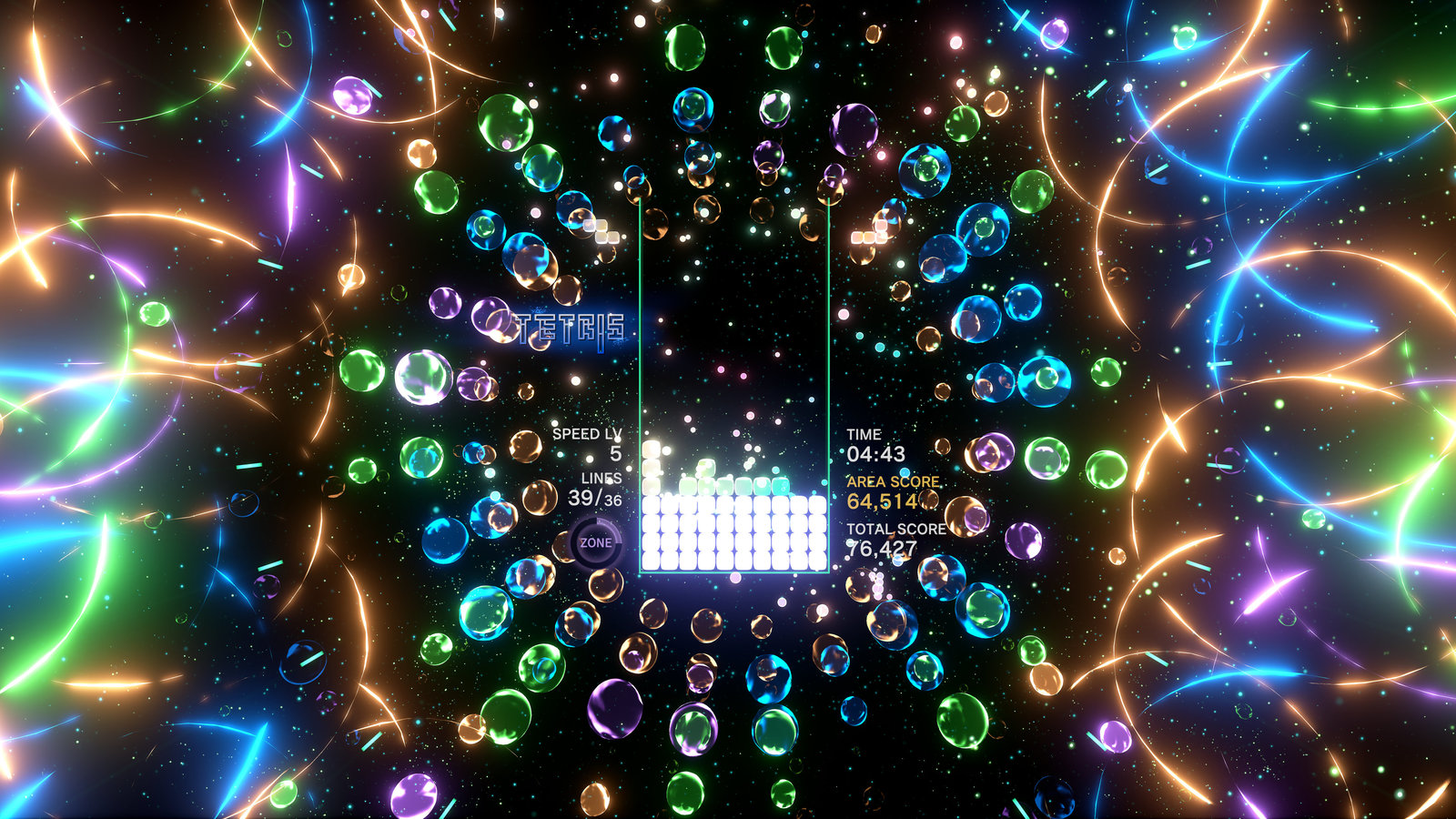 Exponentially different than its original iteration, Tetris Effect: Connected immerses you in the basic concepts of Tetris. “But all you do is make lines of blocks, yeah?” Well, yes. However, the creator of Rez, Tetsuya Mizuguchi, has found a way to reinvent the wheel. While you are still moving shapes, or tetriminos, across a grid to try and make lines of tiles disappear, the presentation and sound in which you do this is utterly stunning. Visually, it is about the most beautiful thing you’ll ever see.

In the main single player mode of Tetris Effect: Connected, every stage looks different. Lighting plays a huge roll in its presentation. On the new OLED Switch model, these stages are gorgeous. It offers a perfect marriage of light and sound, reacting to where you place the tetriminos. Hundreds of colours bring each stage to life, reacting to how you play and providing some of the finest visuals I’ve ever seen. If that wasn’t enough, the soundtrack offers a mix of powerful and emotional tracks that take proceedings to another level. 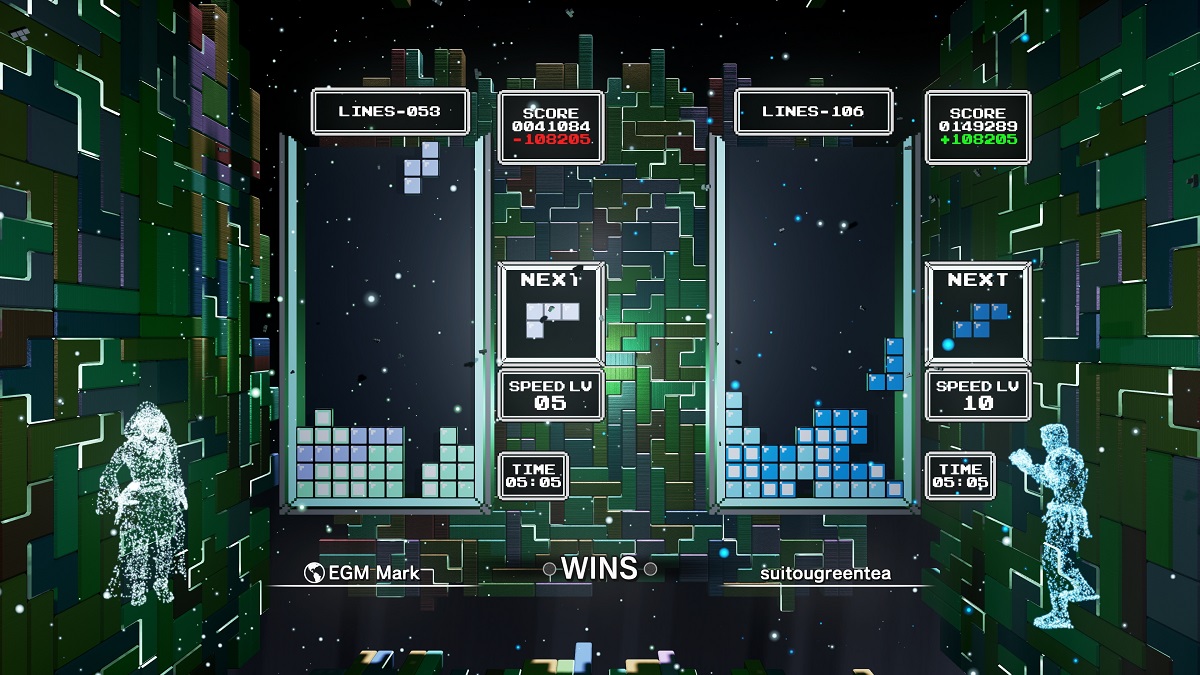 I play Tetris Effect: Connected to escape. To feel something deep within my soul. It never fails to move me. I have wept whilst playing, and I’m not ashamed to admit it. To convey just why it is so emotionally charged in a review is impossible. Playing and feeling it for yourselves is going to do a better job than words ever could. I can’t recommend it enough. The music, the way it looks, the satisfaction of how it feels to play. It feels even better playing in handheld. Having that experience available wherever you are makes you feel more connected to it, allowing you to be transported away regardless of your location.

It looks so impressive on Switch. The pixels pop on the OLED, and the sound hits you more thanks to the front-facing speakers. It may have a slightly lower resolution while docked, but honestly it doesn’t matter at all. The ‘connected’ portion of the title refers to the online mode where you can play with three others at the same time. If you’re a big fan of playing with others, the variety of modes (available in cross-play as well) offers an entirely new level of gameplay. Zone Battles incorporates the new Zone mechanic where games freeze momentarily after a gauge has been built so you can build lines at your own pace.

Another cool feature of Tetris Effect: Connected on Switch is the HD Rumble mechanic that moves the vibrations between Joy-Cons as the bricks move from left to right. It’s just another way to help immerse players into the game. Hands down, the Switch version is the best version. It looks just as wonderful on the console, and plays excellently. With all the additional multiplayer modes and the same features as the original, it manages to reinvent Tetris and turn it into something truly special.

Tetris Effect: Connected is not only the best Tetris game of all time, it's one of the best puzzle games ever. This will change your life.