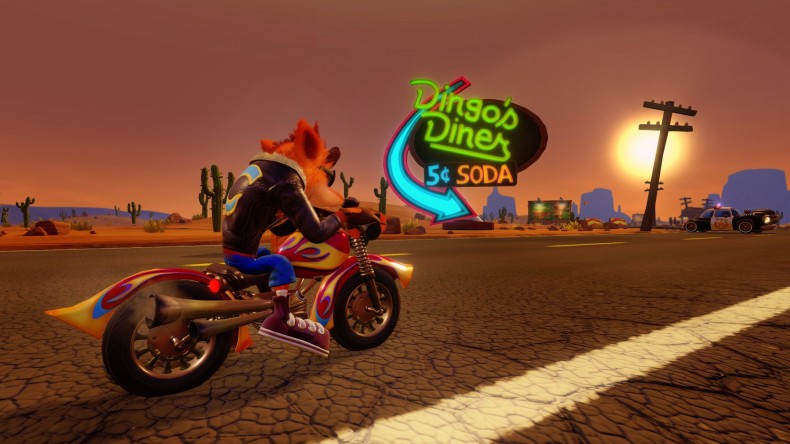 Being critical, Crash Bandicoot is a series that doesn’t hold up to its own nostalgia. That isn’t a particularly focused barb as this rings true for most 3D platformers of the 90s. At the time, developers were still grasping an entirely new dimension in game design, creating a virtual language on the fly. It’s a wonder they still hold up at all. However, advancements of movement, camera and game design just make the old gold stars of the genre like Crash, Banjo-Kazooie and Super Mario 64, feel a little… archaic nowadays. Dated. For fans looking for a nostalgia trip, it’s often easy enough to see past the frustration, but for new players, it can be hard to see what all the brouhaha is about for the classics.

This is an unenviable problem Vicarious Visions are going to be wrestling with in Crash Bandicoot: N-Sane Trilogy. The developer has been tasked with the responsibility of bringing the icon to the modern day, a proposition that’s been levelled at the franchise for sometime. Obviously this being a trilogy, the package will contain three games, Crash Bandicoot, Crash Bandicoot 2: Cortex Strikes Back and Crash Bandicoot: Warped. ‘Remake’ is a tricky word to decipher in the modern games scene. It’s often used interchangeably with ‘remaster’, both terms lobbed around liberally. Let me make this clear; this is a remake in the literal sense of the word. A 1080p up-rez this is not. Rebuilt from the ground up, Vicarious Visions have seemingly put a ton of work into this project. The most striking thing that you’ll undoubtedly notice first is the impressive effort to translate the graphics and art style. While there is a bizarre aspect of seeing Crash with fully rendered fur, the character models and levels pop. That ‘pop’ can be hard to find in redone outings of old games where developers trace over the lines of previous work. That’s not the case here with Vicarious Visions going the extra mile to retain the image of the game in your head that often gets sullied when you actually go back to play the original.

“Even though it’s a different world in a way, you are using new environments, new characters, 3D animation and your using an analogue stick, for fans who played 20 years ago, it has to feel the same way. It has to flow the same way. So getting that right was quite a challenge.” explains producer on the game Kara Massie. “Generally [we’re] doing right by the original games so nostalgic fans will go, ‘yes! That’s the sound. That’s the feeling of the sounds I remember, the feeling of the soundtrack I remember, Crash himself looks and feels like I remember’, but while making it modern and making it a little bit of our own as well. Hitting nostalgia is a challenge. You can’t ever really get that perfect. For people, it is tied to a much broader context than I could ever bring back. You have to get that right in the heart actually. It’s a challenge.” From what I saw and played, it’s clear these are fundamentally the same games, but one of the surprising, even commendable things about N-Sane Trilogy is its willingness to have a little creative license. It would be very easy to be beholden to the originals religiously, but Vicarious Visions seem to be willing to make little touches to enhance the experience. Not so much changing the levels, as these still play as they used to, but just adding some quality of life and flair around the world of Crash. It does beg the question though, how does a developer of a remaster decide when to adhere to the originally closely and when to exert just a tiny bit of creative interpretation? Massie explains, “That’s a really great question, and a really hard question. I think generally, one of the things about Vicarious Visions is that we are an independently minded, autonomous, trusting studio. That comes with having a lot of real experience with people on the team, so you trust your animator. So if they are going to add a little bit of animation to that, I trust that animator knows the brand so well that they aren’t going to do anything that feels wrong.”

This strikes as an integral move. Not only being built from the ground up, as alluded too, the Crash Bandicoot franchise needs a facelift to be palatable for a modern gaming audience. Even those who played them 20 years ago. Obviously, this might send some purists of the original off, but as long as the choices being made are good, there’s no reason not to polish and tweak the games in tiny ways to garner a better user experience. Vicarious Visions aren’t reworking the levels and designs, rather iterating in small but important details. As Massie points out, “Obviously we have checks and balances when we are looking at all the work and everything, but there is a lot of trust. Allowing the developers in the course of their day, moment to moment, to make those decision. ‘I’m going to add a weight belt to this boss’ for instance, or ‘I’m just going to add a couple sounds here because it will make it more full because it needs it’ and just letting people make those decisions. Again, like I said, there are checks and balances. There are parity checks and we have a lot of hardcore fans on the team that makes sure it feels right and on brand, but mostly it is about letting people do their best work.” Of course, adjusting an old game for modern audiences can seem somewhat like a dirty idea, as often that is equated with a loss of challenge. It’s no secret older games used to be harder, so it’s understandable that there might be worry this is the ‘watered down’ version of Crash. While it’s true the developer is looking to invite new players in, it appears to be a design goal to not have that come at the expense of the challenge for older players. Massie explains, “We decided we never wanted to take away the challenge of the original games. We want our hardcore fans to have the same level of challenge they did 20 years ago. However, if there are ways we can help a new player, without taking away from that, we investigated ways to do that there.

For instance, there is just a little hint text in loading screens, which doesn’t take away anything from those who know those hints. Control pop-ups, stuff like that. In boss fights, in places we could improve the messaging a little bit, it’s like, ‘why not?’. So when a boss is vulnerable, maybe you will see a little VFX that you didn’t see before, so you know you can attack that boss. Or adding DDA[Dynamic Difficulty Adjustment] to motorcycle levels. A lot of those changes came out of our user testing. That isn’t going to take away anything from the good player, but if you are new and struggling, you are going to get a little bit of help.”

Having gone back to Crash Bandicoot fairly recently and having a torrid time with it, I’ve come away surprised by my experience with this new undertaking. Not only is it clear how much work has gone into this, but my key worry, that the original needs work past just a touch up of graphics, has seemingly been answered. Vicarious Visions, having to build the entire experience from the ground up, have gotten their hands in there to just nudge these three games along. Of course, as far as we were shown, it doesn’t mean you’ll notice a level has been largely altered or there is something that doesn’t belong. Hell, the developer even said that they are keeping speedrun exploits and I can tell you anecdotally those tough to judge jumps are still there, but this attitude suggests that the developer is confident in what they are doing with this trilogy. Remaking three games is no small feat and as someone who was down on the idea of going back to these well regarded games, I dare say, I’m now feeling the pangs of interest.