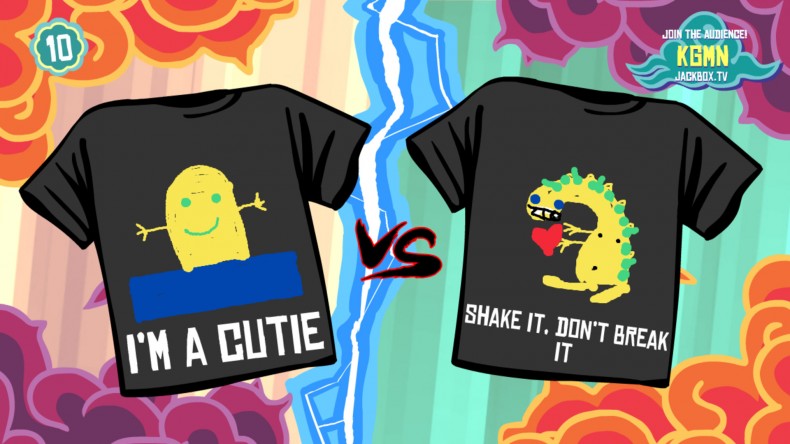 There isn’t a better game to whip out at parties, pre-drinks or just lazy gatherings than the Jackbox Party Packs, and the third installment into the series adds yet more hilarious fun and ample opportunities for extremely dark jokes, debates on how a person wipes their arse and heated hunts for a bluffing faker.

Five games come with Jackbox Party Pack 3: the sequel to the much loved Quiplash, Guespionage, Trivia Murder Party, Fakin’ It and Tee K.O. All five of the games, while varying in quality, are very different and manage to keep things fresh, which especially helps when the majority are of such a high quality. I’ve been playing near enough every night with my flatmates and it’s clear that three of the five games on offer are brilliant, the time has often whizzed by to 2am while we’ve been playing them without us even noticing. Sadly, the two remaining games don’t quite match the enjoyment of their compatriots. My favourite game in the pack, and perhaps out of all the Jackbox games I’ve ever played, is Fakin’ It, a game about lying, subterfuge, bluffing and faking it until you make it. In Fakin’ It, every player, aside from one, will receive a question on their touch screen device. Those players will then have to respond to the question, all at the same time, by either pointing at another player, lifting their hand or indicating a number with their fingers. The other player receives no such task and is merely told to fake their answer and not get caught. Luck is a massive part, but being coy and keeping a straight face is vital. The Faker has to survive three rounds without getting caught by the other players, who have to confer and debate about who the faker is. It’s incredibly intense and frantic (so much so that I can hardly cope when I’m the faker), and I think the reason I love it so much is because there’s much more of a physical, human element to the game which is absent in Jackbox’s other titles. The players have to look at each other, talk with each other, answer the questions in real life rather than write them in on a phone. It’s a much more active and involved game, as you have to be paying attention and it leads to some moments of hilarity. For instance, we were in the third round with the Faker still at large when the question read “point to a person wearing something on their wrists”, only one person was and we all duly pointed in his direction. Except for him, who meekly pointed to his left. He’d been shafted by the game and we loved it. I only wish more than six players could join in.

Next up is the returning Quiplash, which is just more of the great game that was released in the previous pack. It’s definitely the game that led to the most laughs in our time playing it, obviously because, unlike Fibbage, the way to win is by actually being funny. While I do love playing Fibbage, the game itself kind of becomes irrelevant if you’re only playing for laughs, whereas in Quiplash it takes centre stage, allowing for all our stupid in jokes and jibes to be centre stage. Quiplash has been updated in the sequel by adding a ‘Last Lash’ round in which everyone gets the same prompt and it gives the game a grand feel, and also custom prompts which, as you can imagine, can get rather mean. Guespionage is more of a quiz show that’s quite similar to Family Fortunes. A single player will be asked a question and then they have to guess a percentage, then everybody else has to predict if the actual answer will be lower or higher. Points are then given out depending on how close the guesser was and if the players were right in their higher or lower guess. While Guespionage struggles at times for laughs as there are no custom answers involved, it’s still good to play and can sometimes lead to enlightening details about your nearest and dearest. Did you know, for instance, that not everyone wipes their arse standing up? Madness I tell you.

The quality of the games begin to head downhill from here, but there are still moments of fun to be had in each of them. First of all is Trivia Murder Party, which is a quiz intersected with mini games. If you answer a question wrong you’ll be taken to the killing floor to compete in a mini-game, should you fail that your character will be killed. Now, that sounds like a good idea and that you are actually eliminated once you die. But nope, you actually just become a ghost and can continue. The final round is a race to escape and if a ghost takes over someone who is still alive they then swap states of being, with the first person to get to the end being the victor. I’m not a massive fan of Trivia Murder Party because the ending set-up makes the quiz that comes beforehand feel pointless, even if the final race is quite tense. The worst aspect of the spooky quiz though is that the questions are completely ridiculous and so American that is really hard to answer any of them with any degree of certainty. The final game in the pack, Tee K.O, is quite clearly the game for the children in the family. With cute sprites, bright colours and an upbeat sound track, it’s the best looking game of the bunch but sadly the least entertaining. The players are tasked with drawing designs for three t-shirts and then coming up with as many slogans as possible. Then you will get a selection of other players’ drawings and slogans and have to combine them to make the best shirt. After that, two tees will go up against each other and votes will be cast to see which is the better one. Now, that just took absolutely ages to explain, so just imagine how long it takes to actually do. Yeah. It drags for far too long and is, quite frankly, boring to play. While the first payoff of seeing our funny shirts was great, it never reached that peak again and it’s the one game that I imagine will never be returned to.

In general, it’s nice to see that the presentation in Jackbox is continuing to improve with groovy, vibrant backgrounds and different soundtracks. I also like how Cookie is no longer the only hosts of the games now too, as it helps distinguish them all. The ‘VIP’ feature is a handy edition too, it means that only the first person who enters a lobby is able to do stuff like start the game and skip explanations, which certainly helps put a stop to people accidentally beginning the game before everyone is in.

Jackbox Party Pack continues to get better and better in its third edition and. Even though it may contain a couple of duds, there is enough content and variety in the pack to keep you laughing and playing for ages. Or… am I just fakin’ it?

Jackbox is back once again and it’s better than ever with a sequel to a fan favourite, a Family Fortunes-style quiz and perhaps the best game Jackbox have ever created. Only a couple of duds, which still do have their moments, let it down.