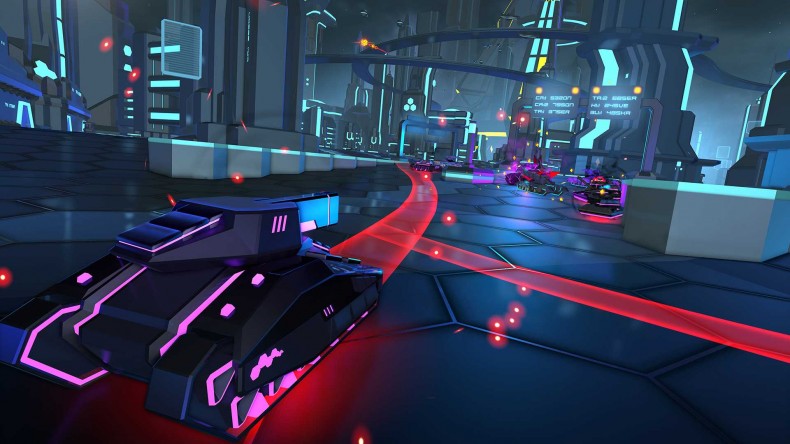 A reboot of “the world’s first VR game”, Rebellion’s Battlezone takes the wireframe tank warfare of the 1980 Atari arcade classic, adds some sexy Tron-style graphics, a procedurally generated roguelike campaign and dumps players in a properly ferocious fight to save the last remnants of humanity from certain extinction.

As far as PSVR launch titles go, Battlezone is one of the most complete games I’ve played so far on Sony’s new hardware. This isn’t a two hour tech demo or a walking simulator that shows the promise of the technology but ultimately fails to deliver. This is full-on, tactical, team-based arcade tank action that, assuming you’re willing to buddy up with friends and strangers online, delivers endless hours of delightfully difficult and satisfying gameplay.

Communication is the first order of the day here and I’m struggling to remember the last time I played an online co-op campaign where I was absolutely forced to plan ahead and talk to my teammates at every single point in our (usually futile) attempts to make it all the way to the final battle. The campaign consists of a procedurally generated map made up of hexagons, each one a randomly selected mission type picked from a pool of pretty bog-standard convoy defense, base-attack/defense and wave survival modes which are elevated to something greater on account of the tactics and teamwork you’ll need to employ to make it past even the very earliest stages.

As you and your team blast your way slowly across the campaign map you’ll accrue credits for each successful battle, these are then ploughed into a plethora of vital weapon, gadget and tank upgrades which must be carefully decided upon to ensure each team member plays an effective role. Forward planning is the difference between success and failure. Who will spend their precious credits upgrading their tank’s healing ability, enabling stricken teammates to get back in the fight quicker? Who will buy probes in order to survey nearby mission types? Who will drop credits on extra lives for the team instead of plumping for a sweet gun upgrade?

Every aspect of each mission needs to be considered and even the smallest mistake can lead to destruction. Turrets, which can smash a tank in one hit, need to be dealt with from distance, cover is vitally important and must be used to your advantage, and it’s essential that all four players stick together at all times. I’ve played rounds of Battlezone where one team member has announced they’re “just going to go see what’s over here” seconds before being knocked out by a distant turret, forcing the rest of the team to launch a suicidal rescue effort that saw us utterly crushed by enemy forces. The AI here may not be the smartest in a game but it knows how to swarm en-masse and keeps your team focused on attack and the inside of your tank covered in virtual (and actual) sweat. Add to this difficulty the roguelike element of the game, which sees everything but your arsenal unlocks wiped if you run out of team lives, and there’s a genuine tension in the air as you and your buddies inch your way forward. This is a tough game, sometimes it can seem unfairly so, but it adds to the excitement and forces those sweet tactical elements to the forefront of proceedings.

On the flip side of all of this, played solo, there is no doubt that Battlezone loses a lot of what elevates its multiplayer from average to excellent and this is something you should absolutely consider before making a purchase. If you’re not intending to get stuck in online with other players, the straightforward, repetitive nature of combat and mission types here just isn’t nearly as much fun. Taking on wave after wave of tanks, turrets and flying enemies on your own gets old quite quickly. However, it’s obvious that Rebellion has designed this first and foremost as a co-op game, right down to the fact that online play sits atop the main menu. Everything about the mechanics and gameplay of Battlezone is electrified by taking it online. Graphically, Rebellion has adopted an unfussy, cool Tron aesthetic. Battle arenas are large, industrial and chunky and it’s this coupled with the fact you look around by simply moving your head which has, for me personally, helped to keep any VR motion-sickness or headaches at bay. In fact, of all the PSVR games I’ve played so far this is the one I can stick at for longest without needing to take a break.

As someone who grew up in the 1980s, watching Tron on repeat with a Tomytronic Space Attack 3D slung around my neck, Battlezone pushes all the right nostalgic buttons, it’s an arcade classic brought beautifully back to life for the most futuristic of mediums. But beyond the nostalgia, the novelty of VR and the “OH MY GOD I’M ACTUALLY IN A TANK” factors at play here, Battlezone is a tough, fun and addictive tank warfare game in its own right that throws down a gauntlet to teams of players and challenges them to really work together to succeed. Rebellion has delivered one of the best titles in the PSVR launch lineup as well as one of the strongest, most social online games I’ve played in a while and it’s something you’ll return to time and again when you tire of the more fleeting, gimmicky experiences the system has to offer right now.

Battlezone is a tough, fun and addictive tank warfare game in its own right that throws down a gauntlet to teams of players and challenges them to really work together to succeed.