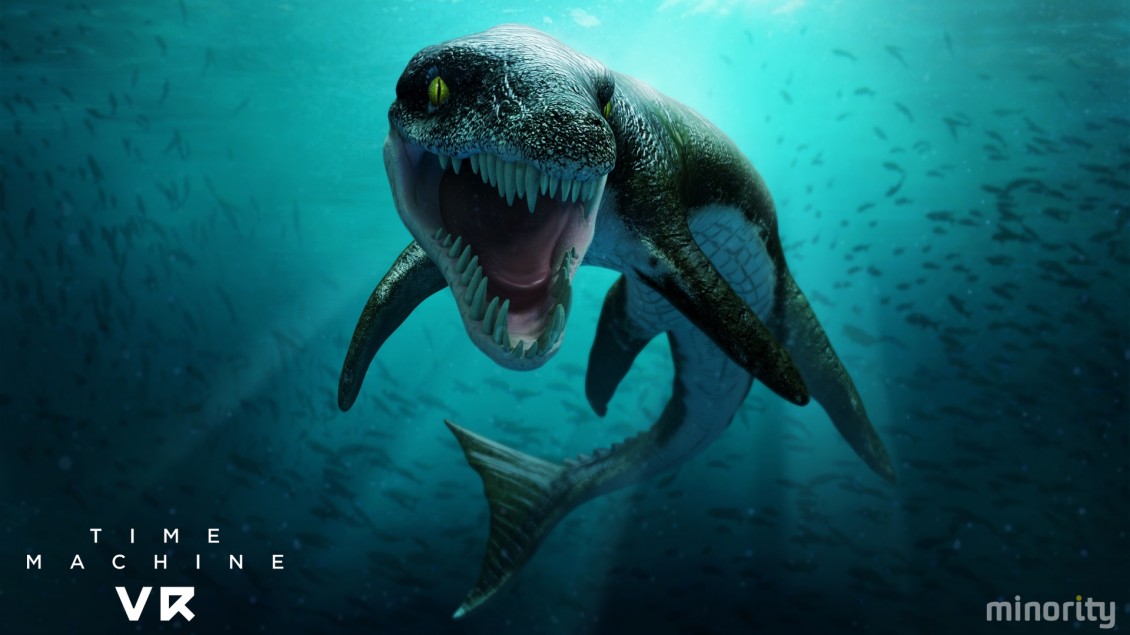 Getting eaten by a Plesiosaur is a scary and awesome experience, and indeed Time Machine VR does a great job of creating that scenario in a virtual space. But the thrills are few and far between in this time hoping adventure, and in the end, the potential is never reached and the story fails to completely immerse you.

As a scientist working in an installation in Svalbard, Norway, you are tasked with exploring the aquatic environments of the Jurassic age in order to help find a cure for a recently unleashed virus that is killing millions of people around the world. They call it the Jurassic Virus, due to it originating from that time period, and only by studying aquatic life from that period can you discover how to treat it.

It’s an interesting and unique story for a time travelling adventure, one far more concerned with science than action, and that makes for a refreshingly different kind of game. Your objectives revolve around gathering data on aquatic life by scanning and tagging a small variety of creatures from the Jurassic period. This is done from the relative safety of your time travelling pod, which doubles as a submarine once you make the jump back in time. After a video briefing straight out of a Command & Conquer title, you fly your pod to the time travelling node outside the facility on the side of a cliff, and are whisked away back to a time where the whole area was under water. It’s unfortunate that only the interludes between missions take place on land, leaving all your adventuring undersea, but it fits the story well. Unfortunately, with the head of the research facility as your only human interaction, you never feel any attachment to the modern world and the plight of the pandemic, which hurts the impact of the narrative significantly. It all feel rather relaxed, which is pleasant enough when you’re scanning monsters under the sea, but after returning from a mission there just isn’t enough urgency.

There isn’t much agency either. Your interaction is limited to engaging with the next mission or reading the data you’ve gathered about the dinosaur life you’ve encountered. And even in-mission you’re scope for exploration is severely limited. The whole experience is strictly linear; you’re given a specific task, such as scanning the digestive system of an Ichthyosaur, and until you complete that task the sea life will swim in fixed patterns. Some sea life are more aggressive and will chase and eat you if you get to close. These moments are delightfully exciting and frightening, thanks largely to your pod’s threat detection sound. If you do fall prey to these underwater beasts, though, you’re simply respawned nearby. Using the Vive’s left wand you can control your pod in order to avoid becoming a meal and generally navigate the environment. Holding the trigger and moving the wand allows for 360 degree movement, but it’s not the most comfortable or responsive solution. The Rift’s Xbox One controller proves to be a more intuitive and less arm straining experience. When it comes to using tools, such as scanners or a tagging gun, using the Vive’s right wand is excellent as opposed to the Rift’s head tracking solution.

Scanning the sea life, occasionally getting eaten, and swimming around in your time travelling pod all feels very authentic. The environments are very samey but they’re detailed enough to immerse you, and the creatures look terrific; moving around naturally, unless you stand still and notice their disciplined, unwavering pathfinding. It create a brilliant atmosphere that makes a wonderful first impression. But it loses its awe fairly quickly due to a lack of variety in aquatic life, objectives, and of course, environments. Meanwhile, the narrative makes it feel like an educational title more than an adventure.

More educational than fun
Narrative fails to engage you

A great first impression soon fails to deliver on its potential, with the promise of time travelling adventure soon falling to education. Mind you, getting eaten by massive underwater monsters is really cool.