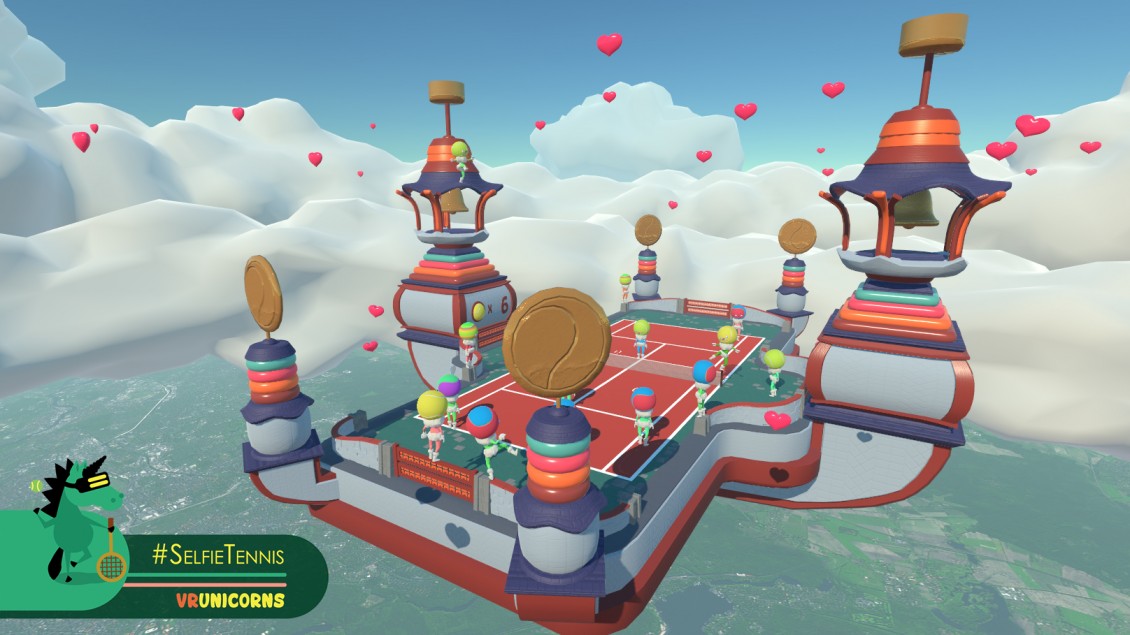 #SelfieTennis offers the quickest way to break your Vive wands, whether it’s spawning tennis balls with one wand whilst swinging the other (shaped in-game as a racket) and smashing the two wands together, or forgetting to put the straps on and hearing the shatter of glass as one of your wands sails across your room and into a TV or window. Fortunately after a few clatters, and potentially hundreds of pounds worth of damage, you learn from your mistakes and discover that #SelfieTennis is actually quite fun.

As the title suggests, it’s about playing tennis with yourself, and whilst this may conjure up images of you standing in front of a wall, it’s actually a lot more involved than that. You begin on a tennis court, seemingly floating in the air. A pull of the aforementioned wands spawns in a tennis ball, with the trigger release setting it free from your grasp. Then with the racket spawned from your other wand, either kept in place by holding the trigger or locked in place by double pressing, you then hit the ball across the court. If the ball sails true over the net and stays in-bounds, you’re then teleported to the other side of the court where you’ll receive the ball, able to hit it back to yourself; rinse and repeat. Here your goal is to return the ball in such a way as to allow you to maintain a rally for as long as possible. It’s surprisingly good fun trying to maintain the rally, but inevitably things will begin to go awry and you’ll fling the ball out of bounds. Here’s when you might notice you have a crowd of odd looking characters prancing around the side-lines, balancing on walls and spectating on your game. Strike them with an errant ball, or maliciously fling your racket at them at few times, and they’ll die, releasing a floating heart. Hit that heart and you’ll collect it, revealing a whole new, and much darker game you can entertain yourself with. And the absurdness only grows from there.

The spectators are comically large with huge tennis ball heads and smiles on their faces, just begging to be struck, and once you collect enough hearts, Heart Attack mode kicks in, with characters with heart shaped heads appearing and points being awarded for their demise. And alongside a ball and racket, you can also spawn a selfie stick to take photos and GIFs of your tennis playing antics, or more likely, you posing next to fallen spectators. These can then be uploaded directly to your Twitter account, if you like.

Indeed, #SelfieTennis has a terrific sense of humour and a few neat Easter eggs to get you experimenting. However, at present it’s all a bit shallow. Terrorising spectators, posing with corpses, and of course playing tennis, can only keep you engaged for so long in a single session, although its replayability is surprisingly high. You’re likely to find yourself returning to the virtual court for a bout of tennis, time and time again. Meanwhile, the more absurd side of the title proves an excellent taster for those you want to introduce VR to. Unfortunately the physics are a bit off. There isn’t enough momentum behind the ball when you strike it or any object when you throw it. For the tennis playing aspect this proves fairly useful, slowing it down enough and granting generous bounces so you can better hit the ball, but the more violent aspect suffers as a result. Furthermore, the racket length feels a little bit too long.

The cartoon aesthetic and tennis setting hides a dark and twisted, yet delightfully satisfying slaughter simulator that’s funny and entertaining to play in short sessions, but it’s the tennis that’ll keep you coming back. That said, it still needs a great deal more content to fully hold your attention. Fortunately the developers have grand plans for the future, let’s hope they see the light of day.

Turns out playing with yourself is a lot of fun. Who knew? However, despite some neat Easter eggs, the fun of slaughtering cartoon spectators with balls and rackets, and the pleasantly compelling tennis itself, there’s very little content on offer for the price.