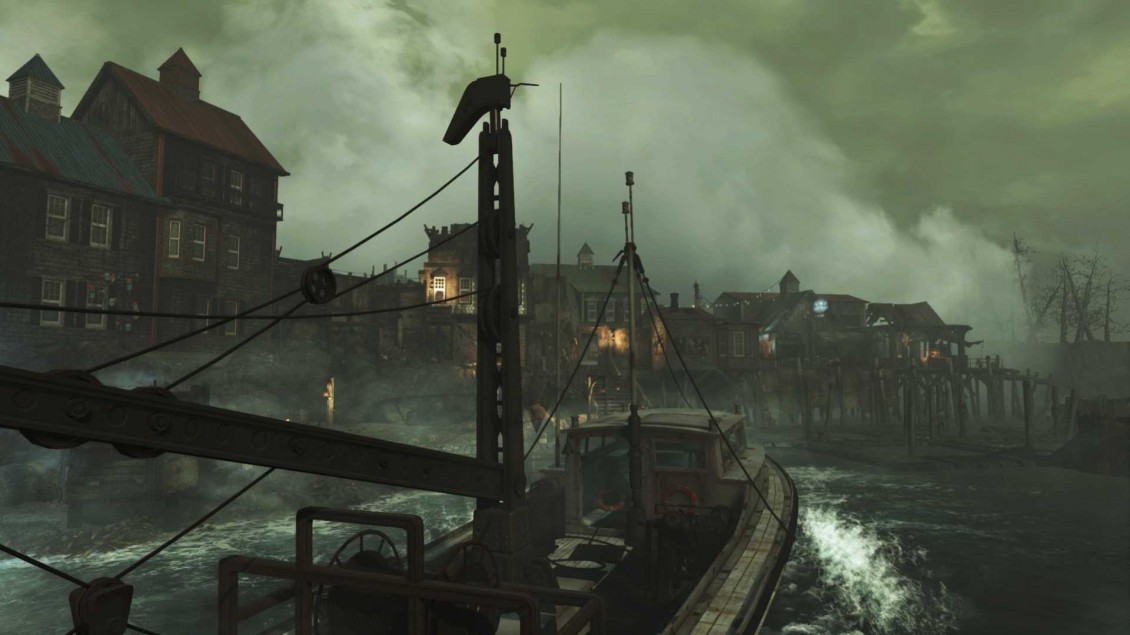 Anyone familiar with Fallout 3‘s Point Lookout DLC (or indeed any of Skyrim‘s additional content) will know that Bethesda took the backlash to that whole “horse armour” debacle pretty seriously and have apparently been trying to atone for it ever since. In other words, they don’t really do “small” DLC; even Fallout 4’s last slice, Wasteland Workshop, added a decent amount of content for a few quid despite not bringing with it any new quests or areas.

The increase in price of the Season Pass, even in light of the announcement of more DLC, upset the fans for good reason, and I won’t defend it here or anywhere, but in Far Harbor, Bethesda are at least showing that they are prepared to do their best to justify it.

Similarly to Point Lookout, the action in the latest DLC takes you away from the primary gameworld to a new area with its own factions, enemies, quests and secrets. Far Harbor is an island community some way away from the Commonwealth, where the slightly conspicuous residents of a former tourist town are up to their necks in runaway Synths, Children of the Atom, really mean radiation and giant mutated swamp-life.

Although there’s no strict level requirement, you will have to have ingratiate yourself with Nick Valentine in order to be called back to his detective agency in Diamond City, where you’ll be told about a young girl named Kasumi who has apparently done a bunk in the night with her grandfather’s boat. She thinks she’s a Synth, see, and she’s high-tailed it to Far Harbor to find out the truth. You don’t have to take Valentine with you, but given his history with the girl’s father and the fact that he’s a certified Synth, it’s worth keeping him along for the extra backstory. To pretend Far Harbor is anything more than more Fallout 4 would be playing it false, but it does feel like more new Fallout 4, so even if you’ve rinsed everything you can from the game up to now, this is entirely fresh. The insane Children and the apparently honest Synths are new factions, while the townsfolk come with a whole new set of problems, not least of all the menacing fog that irradiates everything it touches and brings with it new enemies in the form of gulpers, who appear to be mutated toads, or anglers, who come at you out of the darkness with a bright light bobbing in front of their heads. Mix them with glowing mirelurks, new bandits called Trappers and a handful of other indigenous threats and you’ve got your hands full.

The problem is, none of the new enemies really require an adjustment of tactics. You’re still pointing and shooting while mostly back-peddling until your AP meter is full, and the new weapons and armour are cosmetically different but rarely change the game or even challenge the status quo. The island’s characters bring far more to the table here, not least the charismatic but almost unreadable leader of the Synths, DiMA, whose grandfatherly tones are at constant war with his menacing bio-mechanical appearance.

You can jump right into the main questline, involving the retrieval of his lost memories from his former home – now occupied by the fanatical Children – or branch out into sidequests and exploration, which is the recommended option. The new quests might not shake things up too much (most are either retrieval missions or kill quests), but they do take you all over the island, and it’s a sight to see. Eerie blue-grey fog envelopes large areas of the map, and catching a splintered sunset through one of those smoggy clouds is surprisingly beautiful. Tall trees draped in moss and lichen loom over the craggy landscape, and deep swampland hides submerged horrors and the overgrown remnants of civilisation. It feels more ominous than anywhere in the Commonwealth, like something from a 50’s B-movie, where every shadowed tree-branch or half-drowned log is a wolf-man or swamp-thing waiting to pounce. Take bitter, alcoholic new companion Old Longfellow on a few jaunts and he’ll constantly remind you that no one knows exactly what’s hiding out there in the fog. If there’s a complaint in this department, it’s that there’s a lot of empty space on the map, and you can spend a lot of time running around with nothing to do – even moreso than the campaign, in fact, and here it feels like more of a sin because the island has such potential.

At this point there’s nothing to be gained from reporting on the same bugs and glitches other than to say it’s a shame Bethesda haven’t yet, and probably never will have, fixed them. The physics occasionally go bonkers, enemy AI is mostly of the relentless zerging variety and technical issues loom out of the fog with roughly half the frequency of actual monsters. Alright, that’s an exaggeration, but they do persist and they’re still just as irritating as they always were.

At the end of the day, my earlier prognosis stands true: this is more Fallout 4. The characters you’ll meet on the island are just as difficult to get a bead on, and it’s usually the ones with the most apparently extreme views who end up surprising you. No matter what, it still has that curious ability to make every weighty decision you ponder feel like the right one until about ten seconds after you make it, and it still puts the greater experience above more “gamey” concerns like challenge and structure. Far Harbor invites you to get lost in its mystery, travel its gloom-haunted byways and submerge yourself in its bleak politics, but while the clothes it wears may be new and enticing, the personality underneath is mostly unchanged. Though, let’s be honest: that’s why you got on the boat in the first place, isn’t it?

If you made the trip to Far Harbor at all then you know what you're hoping for, and it's safe to say you'll find it. Just don't expect a radical departure from what has come before.