The Walking Dead: Michonne – Episode Two: Give No Shelter Review 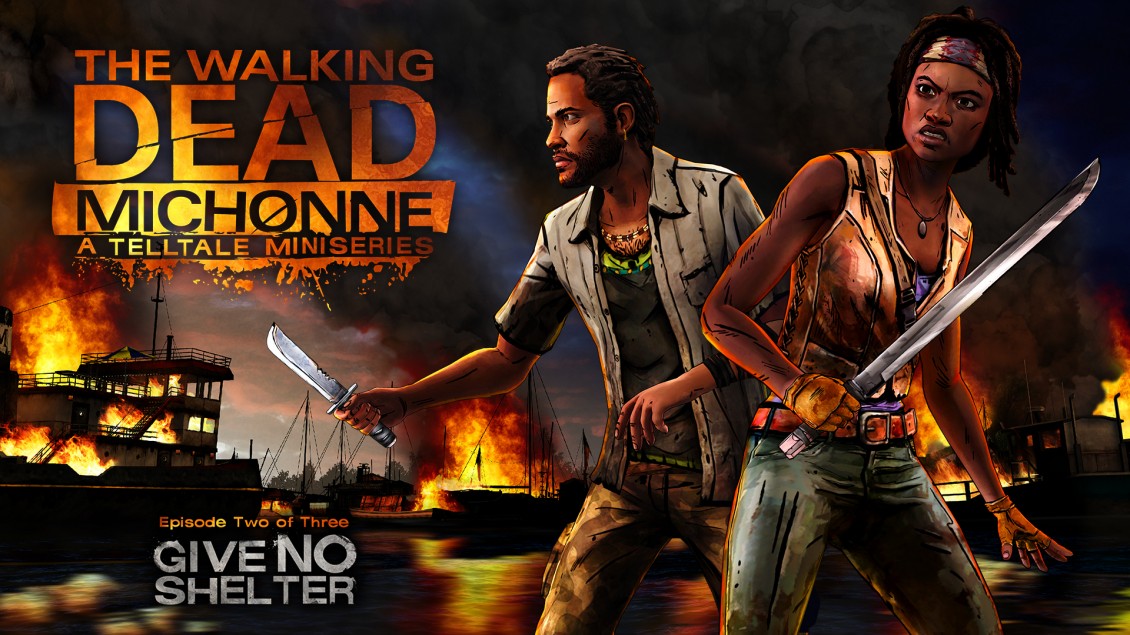 Warning: Contains spoilers for Episode One of The Walking Dead: Michonne.

The first episode of The Walking Dead: Michonne did a great job of painting the bigger picture in regards to who Michonne really is, and it also managed to introduce new characters and settings we hadn’t seen before. Along with newcomers Randall, Norma and Sam, we get to see deeper into the psyche of the titular protagonist as she struggles to cope with the loss of her daughters, Elodie and Colette. If you thought you’d seen Michonne at her worst in Episode One, there are a few times in Give No Shelter where her sanity slips even further into the darkness and you’ll start to see a completely new side to her.

After the grisly events at the end of Episode One, Michonne, Sam and Pete find solace in the makeshift home of Sam’s father, but when everything (and I literally mean everything) goes to shit, Michonne has to make some important decisions that will affect the constantly diminishing group of survivors. There didn’t seem to be any huge decisions in Episode One where the repercussions were felt in any way, but there are some monumental decisions to make in Give No Shelter, and by the end you’ll be left wondering if you made the right choices. The characters in Episode Two are given more of a presence, with Sam playing a much more important role than before. We learn a lot more about her and her family this time around and it helps to show why Sam is as confident and strong as she is. Even after watching her brother die at the end of Episode One, she realises there is still something to fight for in the messed up world of a zombie-infested America.

Not all the characters in Give No Shelter are as endearing as Sam, mind you. If you weren’t a fan of Randall before, I can guarantee you won’t be by the end of Episode Two. Where villains like Negan and the Governor both had a sense of control and respect, Randall doesn’t care about what he does or what he says to anyone. He’s a vile, despicable human being and you’ll hate him so much, which is a good thing really; it would be disappointing if he pulled a box of cookies out of his backpack and starting singing Katy Perry songs, wouldn’t it? As gripping as the story is, you don’t really feel any closer to knowing where it’s heading. Penultimate episodes of any show or game tend to give some sort of focus for the finale, but you get the feeling there’s a chance the next episode will be rushed. It feels like a lot has to happen before Michonne joins Rick and the gang.

The story in Give No Shelter is nothing short of shocking or intense. In true The Walking Dead fashion, you can’t rest or relax at any point and thinking things can only get better is naïve. There is a moment towards the end that stunned me so much I failed to see the command prompt that popped up and I took a bullet to the head as a result. Moments like this make up most of Give No Shelter, especially as it reaches the closing moments. Zack Keller and Andrew Hansom have written a thrilling piece of drama and its director, Sean Manning, makes all the pieces fit together wonderfully.

Trying to make three episodes fit well within the comic book’s canon was always going to be a challenge, and if the final act pulls it off, The Walking Dead: Michonne should be as highly regarded as the two seasons preceding it. It’s such a shame that many of the issues letting down The Walking Dead return once more, feeling more prominent in this episode; lagging in some scenes was more frequent, and some of the dialogue stopped momentarily causing some frustration. Minus these problems, Give No Shelter is another great entry into a respectable and beloved series and you’d be smart to pick it up and continue the story of one of the best characters in the series.

The same persistent issues are back

The second episode of Michonne’s story improves on the first, but the same old Telltale technical issues lurk like a herd of walkers in the shadows.