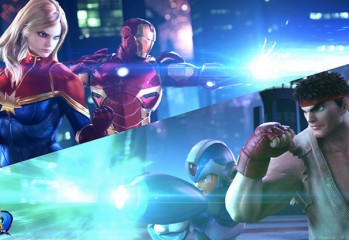 Watch a new story trailer for Marvel Vs. Capcom: Infinite

Marvel Vs. Capcom: Infinite will release this September

by Colm Ahernon July 5, 2012
Capcom have revealed that they're bringing Marvel Super Heroes and Marvel Vs Capcom: Clash of Super Heroes to XBLA and PSN later this year

by Martin Bakeron February 8, 2011
Over the past couple of weeks we’ve had news post after news post talking about new characters, new game modes and upcoming DLC for the soon to be released Marvel Vs. Capcom 3: Fate of Two Worlds. Today is something different though, today we’ve got information about the final boss of the game. The character […]

by Robin Parkeron November 17, 2010
Round three…FIGHT!!! Today Capcom has revealed a raft of new details concerning the highly anticipated fighting title Marvel vs. Capcom 3: Fate of Two Worlds. Perhaps the biggest piece of news is the confirmed release date for both the Xbox 360 and PlayStation 3 versions – February 18th 2011. As that is a friday, we […]