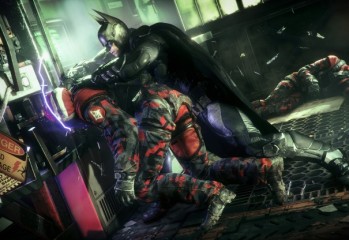 by Nick Gillhamon August 19, 2015
Where does he get those wonderful toys?

by Nick Gillhamon May 21, 2015
Are you the hero Gotham deserves?

by Adam Cookon September 7, 2011
The special collector's edition of the game will come with a code to digitally download the soundtrack. Featuring artists such as Coheed & Cambria and Black Rebel Motorcycle Club, the soundtrack is looking mighty impressive, and here's the full tracklist and cover art (which we think looks fab!)

by Mark Bridleon June 8, 2011
GodisaGeek went behind closed doors at E3 to see Batman: Arkham City in action, as well as some new characters such as Penguin and The Riddler.

by Robin Parkeron February 15, 2011
The director of Batman: Arkham City at Rocksteady Games – Sefton Hill – has announced that the next outing for the Dark Knight will not feature any multiplayer modes at all. Rather the company wanted to focus on producing a great, well-polished single player experience. He syas that the team did explore the possibilities of multiplayer […]

by Asim Tanviron September 2, 2010
Holy Smokes, Batman! Would you look at that, the first ever batch of brand new Batman: Arkham City screenshots! We’re not quite sure if they are official as they originally appeared on this Flickr account and have now been taken down, only to be replaced with an image of the Joker saying “These screenshots are […]