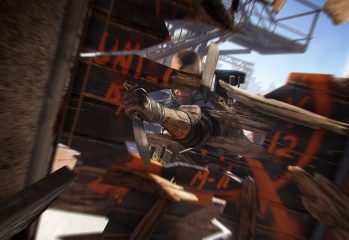 by Colm Ahernon January 13, 2012
Ubisoft have announced that their highly successful, Just Dance 3 game has sold over 7 million copies and the series has sold 25 million.

by Tony Windebankon October 18, 2011
Is the third entry into the Just Dance series of games the pinnacle of the franchise or just another game for you to look a fool while playing? Let our very own Tony Windebank give you the details.
2

by Robin Parkeron April 19, 2011
Game: Michael Jackson: The Experience Developer: Ubisoft Montreal Publisher: Ubisoft Available On: Xbox 360 (Alternate versions also available on Wii, DS, PlayStation 3, PSP) If people were to name their favourite singers and dancers, it is highly likely that there is one name that would regularly top their lists. Michael Jackson helped revolutionise pop music as we […]

Get Ready To Dance & Sing With Michael Jackson: The Experience

by Robin Parkeron April 14, 2011
Cha’mone! After its Wii, DS and PSP release last November, Michael Jackson: The Experience is finally Moonwalking onto Xbox 360 and PlayStation 3 today. Ubisoft are proudly launching this all-singing, all-dancing game, which makes use of Kinect on the Xbox 360 and Move on PlayStation 3, with both versions also supporting wireless and wired microphones, […]