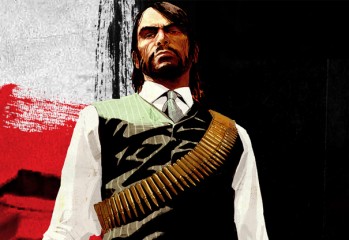 by Mikhail Madnanion November 30, 2016
Step in front of a runaway train..

John Marston Saddles Up For His Last Stand In September

by Robin Parkeron July 28, 2011
At the start of the month, we brought you the news that it looked like there would be more Red Dead Redemption DLC on its way from Rockstar Games. Well now the developers have come out to confirm that, and have stated that there will be a special – completely free – bonus pack of […]

More DLC On The Horizon For Read Dead Redemption

by Robin Parkeron July 1, 2011
In a surprising move, Rockstar Games have confirmed that there will be more forthcoming DLC for their mega-hit open world Western, Red Dead Redemption. The game is over a year old now, and has already been treated to  several multiplayer upgrade packs as well as the large, zombie-themed side-story DLC pack, Undead Nightmare. In a […]

by Robin Parkeron April 11, 2011
As we reported last month, when it was announced that all of the L.A. Noire pre-order exclusive bonuses would eventually be made available to all for purchase, Rockstar Games also confirmed that the pre-order DLC that was made available for Red Dead Redemption at launch would receive the same treatment. Well now, almost a full […]

by Robin Parkeron October 15, 2010
Rockstar Games have confirmed that they will be publishing a disc bundle of all of the Red Dead Redemption downloadable content released to date. As they did with the GTA IV DLC bundle Episodes from Liberty City, this new pack will include the upcoming Undead Nightmare Pack, the Outlaws to the End co-op mission pack, the […]
1