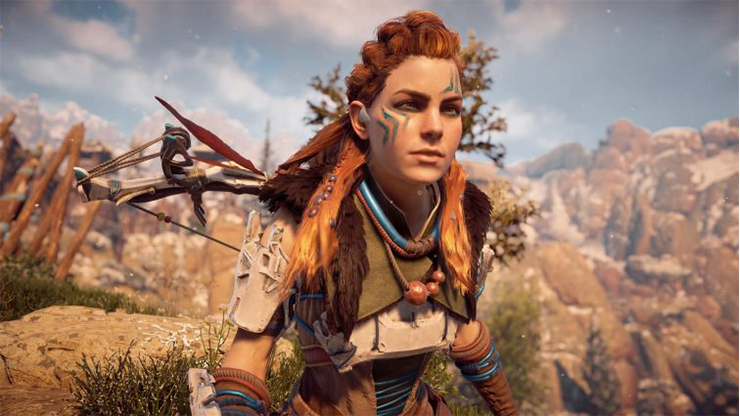 Very few things can get my attention more assuredly than a picture of a cavewoman fighting a robot dinosaur. In fact, unbeknownst to me, the first image Guerilla Games ever shared pertaining to Horizon: Zero Dawn was right at the top of my wish list of things I’d been waiting for since the internet was invented. There was simply no way in my mind that Horizon could possibly fail. It was about the coolest concept I’d ever heard of. The wait between initial reveal and eventual release was almost painful, not helped by me having a quick razz at EGX prior to the launch and getting myself all worked up.

Here was a game that aimed to take the familiar concepts of the open world action game (given a new lease of life thanks to the 2012 Tomb Raider reboot, among other things), and mix them with something not only brand new, but that seemed so far out of left field that no one saw it coming. Robot dinosaurs. Just say that phrase out loud a few times.

But as awesome as it sounds, that phrase also sells Horizon: Zero Dawn short – not to mention the passion Guerilla put into the game. Because it’s more than just about robot dinosaurs. If you’ve played it, you know it presents one of the most compelling, beautiful and atmospheric open worlds in years. From rugged, arid desert landscapes to the vine-wrapped bones of civilisation, green and verdant but dead all the same, to towering ice-caps wreathed in snow and peril, the world of Horizon is steeped in majesty Even the beasts themselves, not dinosaurs at all really, but rather the result of a sophisticated AI doing its best to replicate a working eco-system in the wake of humanity’s destruction, are much less gimmicky than their initial reveal suggested. In the far-future world of Horizon, the Machine is literally God, a self-crowned conqueror created to protect humanity, but who instead found a way to replicate, enhance, and destroy sentient life on Earth.

The sparking, crackling icing on the chrome-plated cake is the protagonist, Aloy, a fantastically written hero whose search for answers goes hand in hand with her search for acceptance, arm in arm with her quest for vengeance. Aloy is more than just a generic hero able to fight and sprint and climb. Her fate is irrevocably tied to humanity’s; her destiny, since birth, has been to change the course of our future. Balanced, believable, vulnerable but determined, unsure but unwavering; for my money Aloy is 2017’s most compelling protagonist, and her sprawling, action-packed tale is that rarest of beasts: a game that can easily last beyond 50 hours and not for a single heartbeat outstay its welcome.

While the supporting cast is sparse, characters like Silens (voiced by the charismatic Lance Reddick) and Erend act as wonderful vocal sparring partners for Aloy. Silens’ motives are never truly clear, and his relationship with our heroine is often strained, while Erend’s earnest yet flawed warrior provides some much-needed levity.

In the broadest of terms, Horizon: Zero Dawn is a very similar beast to the new Tomb Raider games. The movement and landscape evokes memories of Ms. Croft throughout, but Horizon still manages to feel utterly unique in its composition. Using Aloy’s augmented spear you can calm robotic beasts analogous to horses and bulls, then swing into the saddle like Link on a bad day, or turn them to your side and set them against each other. Some of the larger creatures like the Stormbird and Thunderjaw (that’s a giant eagle and a T-Rex with rocket launchers on its back, by the way) make for long, desperate battles where you’ll be forced to employ tripwires, exploding mines, and every other weapon in Aloy’s considerable arsenal. I don’t think I ever got bored of using the Ropecaster to effectively tie my quarry down. Combat has an incredible rhythm, impact feels tangible and the stakes are always high.

From raiding ancient, old world facilities to climbing the colossal, giraffe-like Tallnecks to get a vantage point of the surrounding area, Horizon never feels less than exhilarating. It’s not only a case of the game being playable or pretty – it’s genuinely one of the most well put-together adventures to grace a Sony console. Or any console.

While the missions themselves are intriguing and interesting, and the story unfolds with some surprising twists and emotional beats, Horizon: Zero Dawn is never better than when you’re out just interacting with the world. You might be stalking a herd of robot gazelles for the canisters on their backs, or tensely circumnavigating the patrol route of a gargantuan cyborg sabretooth; hell, you might just be sitting by a stream or perched on a jutting outcrop of rock watching the world live. I lost hours to Aloy’s decayed but stunning future.

Other games this year have hooked me, wowed me, hit me in the feels and stolen my time away like flamboyant thieves, but Horizon: Zero Dawn hit me in every soft spot that counts. As epic as they come.

Senior Content Editor Mick has been playing games for over 30 years and writing about them for around 12. After drifting from site to site for a while, settling briefly at the now-defunct Made2Game and freelancing for the gone-but-not-forgotten NintendoGamer Magazine, he came at last to rest at Godisageek. Mick has been a reviewer, staff writer and content editor here for some time, while also moonlighting a little for Red Bull Games. He has 4 kids, has written 2 novels, and sometimes even manages to pay a bill or two. You'll usually find him defending the galaxy in Destiny 2, battling evil in Diablo 3, or lurking in the background on Twitter. Find him there @Jedi_Beats_Tank, or on XBL (JediWaster247), PSN (Jedi_Waster) or Nintendo (JediWaster).
MORE LIKE THIS
GOTYgoty 2017Horizon: Zero Dawn