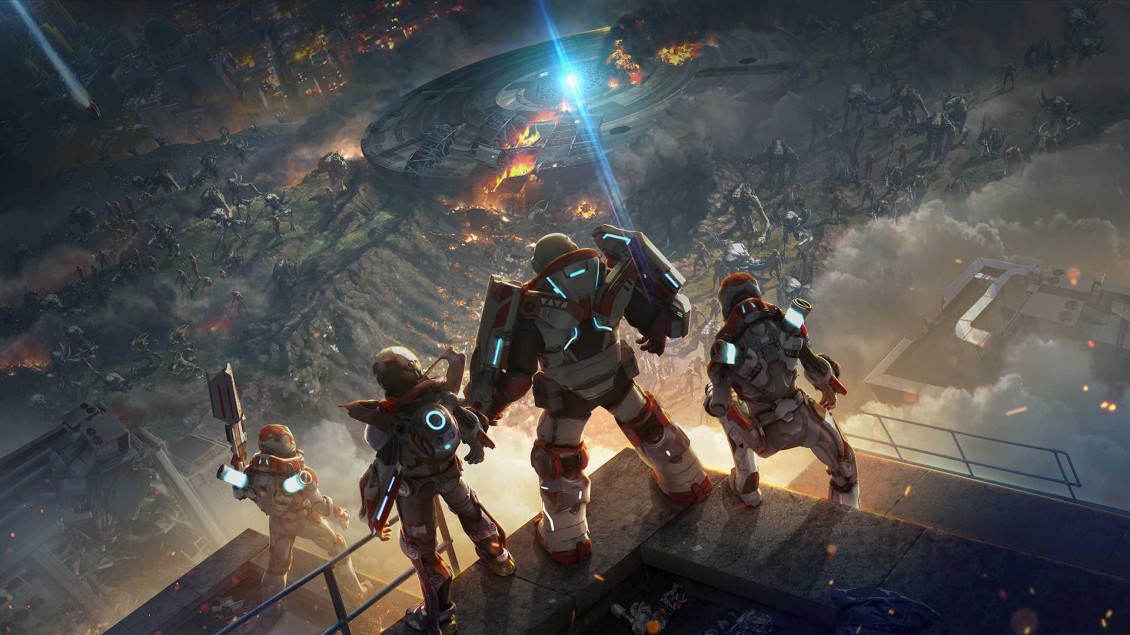 Given the high praise heaped on both Resogun and Dead Nation, it’s safe to say developer Housemarque has pedigree when it comes to fast-paced, action-packed shooters. Latest outing Alienation offers further proof, if you should need it, that Housemarque knows its stuff.

Dropped into a futuristic world where aliens have not only invaded but largely wiped us out, your objective is to take back the Earth with a mixture of teamwork and blowing shit up, with a heavy emphasis on the latter. If you can imagine a game that makes Dead Nation feel cerebral, this is it. That’s not to say Alienation is all dumb fun, of course. Well, actually, it mostly is – but it’s also clever where it needs to be.

In order to fight the alien menace, a global initiative called UNX has developed cybernetic body-suits to give ordinary soldiers a fighting chance. These suits come in three flavours, which boil down to tank, support and healer. Whichever you choose is locked in to a save file, so you can’t switch classes mid-story. They each have particular abilities that you’ll unlock as you level up, ranging from invisibility to group healing. As with all good co-op games, each class compliments the other two, though it’s fully playable on your own. Going in solo is tough, though, as the menagerie of monsters is quite the diverse assortment of grotesque extra-terrestrial killing machines. There are the standard shambling mutants, spider-like skittering horrors, and huge, hulking brutes. But that’s only half the problem, the other half comes in the form of teleporting “stalkers”, snipers, soldiers, flamers and fire-spitting “dragons”, all of which pack a devastating punch even from a distance.

Level objectives are usury fairly straightforward, often asking you to head into an area and reactivate a satellite array or wipe out an alien leadership caste. The level designs are varied and, on the most part, beautiful, as the action takes you from frozen Russia to sun-baked Brazil, or even up into the corridors of an alien mothership. Each mission map is huge, but individual missions will only utilise a portion it so you’ll never feel overwhelmed, even when playing alone. Of course, you could complain that this is a way to allow the developer to re-use levels, but that’s a petty grievance.

As you climb towards level 30 and beyond (when you hit the soft cap you’ll unlock “Hero levels” so you can keep leveling for upgrades), you will need to outfit your soldier with the newest gear that’s found in loot crates and dropped by the dead. Containers will randomly spawn, or named enemy mini-bosses will drop them, and you’ll often find new weapons or upgrade materials inside. Primary, secondary, and heavy weapons can be found in the field, but can only be upgraded with “cores”, collectible power-ups that add damage modifiers to your arsenal, providing the selected weapon is at least of blue (rare) quality. The controls are almost the same as in Dead Nation, assigning grenades to L2, boosting to L1 and melee to R1. It doesn’t take long to get the hang of it, even though there’s always something to loot, kill, or run away from, so you won’t get much time to relax. Respawn beacons litter the levels, but recklessly destroying them will reward you with a higher chance of good quality loot at the mission’s end. It’s an intriguing risk/reward system that makes you weigh up what’s important.

Also intriguing is the multiplayer element. Joining a game is as easy as selecting an active one from the mission menu, but you can opt to “invade” others too, at which point you’ll be forced to fight to the death. By far the best way to play is with a few people who know what they’re doing. Now and then you’ll jump into a mission that’s just about to finish, which will count towards your story completion but reward you with nothing. It’s a slightly broken system that needs patching to allow you to either see what point a mission is at, or be restricted from joining after a certain point.

Leveling takes a while, and some missions throw crazy enemy mixes at you which will often stretch your skills and your characters’ abilities to the limit, but it’s incredibly satisfying to play a top-down shooter that’s so on-point. Alienation may lack the tactical nuance of Helldivers, but it makes up for it with tight shooting and a shit-ton of pretty-pretty explosions.

Drop-in Co-op needs tweaking.
Maps are re-used over and over.

Alienation may lack the tactical nuance of Helldivers, but it makes up for it with tight shooting and a tonne of pretty-pretty explosions.