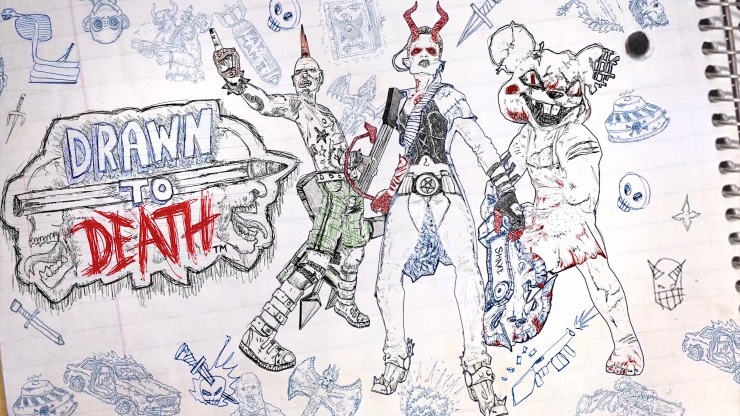 Drawn to Death is the newest game from David Jaffe of Twisted Metal fame. The basic game is a cel shaded, black and white, third-person shooter where post-apocalyptic freaks duke it out using outlandish weapons. Visually, Drawn to Death draws heavily from the ill-received MadWorld from Sega and Platinum Games. The demo on the floor presented a deathmatch setup between several twisted characters in an urban environment. While the standard automatic rifles and snipers endemic to the genre were present, the game also features exaggerated weapons, like a casket from which players can launch explosive corpses. It’s an amusing piece of weaponry and suggests the game has some creative spirit, even if it’s anemic. The deathmatch demo itself was a bit of a bore, and despite a half-way unique visual motif and Jaffe’s trademark sense of dark humor, the game might be dead on arrival.

As a spiritual successor to Dead Nation, Alienation is a co-op-focused, top-down shooter that emphasizes swarms of enemies, fast-paced action, and character building. The game is the latest shooter from fan-favorites Housemarque, the Finnish developer behind PS4 launch darling Resogun. I played a pre-alpha build, alongside a Housemarque team member, and we died almost a dozen times before finishing the demo level. So it has a healthy level of difficulty, to say the least. Indeed, Alienation’s difficulty demands players master its key mechanics, including dashing, activating special abilities, like shields, managing explosives, and strategically using each characters weapons, which will stop operating if used continually. If players try to spam attacks, they will quickly find themselves confronted by a wall of alien bugs while all of their defensive and offensive weapons are on cool-down. The PS4 version of Tearaway retains much of the charm that made the PS Vita game stand out so much: a world made of paper, a stop motion animation style, and gestural controls. However, in order to account for the change in hardware, the PS4 version uses the DualShock 4’s touchpad and gyro controls to approximate some of the gestural controls of the original handheld version. In the demo I played, the player, acting as the fabled Messenger of the franchise, must help the main character scale a mountain, using finger swipes to change the direction of the wind and swapping items between the game-world and the controller; and back again in order to increase the potency of projectiles. It sounds bizarre, but is actually quite charming in actuality. Additionally, those who have the PlayStation Camera can snap photos that can be used as textures in the game for particular environments and creatures. I plastered my ugly mug onto the side of a deer, a sort of perverse branding, I guess. Cute and novel, it remains to be seen if Tearaway can garner much of a following on the Vita’s big brother.

Have you ever wanted to play through the dreams of a young girl? Well, in one of several short stories included in the first-person exploration game, What Remains of Edith Finch, now you can. While the full release (scheduled for 2016) will include a collection of short stories to play through, the demo Sony brought to E3 was confined to the previously mentioned dream sequence. While experiencing the little girl’s dream, players take control of several creatures, all of which are on the prowl for something living to eat. As a cat, players chase a bird from branch to branch. As an owl, players stalk rabbit in a snowy field, diving down, claws extended, to scoop up their prey. As a shark, players navigate a bed of kelp while trailing a seal. And in perhaps the most bizarre section of the dream, players take control of a tentacle monster and slither across the deck of a ship, swallowing its inhabitants. The genre trajectory of the demo, then, proceeds from whimsical to almost Lovecraftian, which is never a bad thing. If this short sequence is any indication, the full version of What Remains of Edith Finch will be special indeed. Until Dawn has garnered a lot of media interest since its announcement, and Sony has not been shy about showing the horror-themed, cinematic game at various events. The basic premise borrows heavily from tropes of the horror genre. A group of typecast teenagers get stranded in a cabin on a mountain for the night while a demonic presence slowly hunts them all down. However, if the latest demo at E3 is indicative of the final game, I’m afraid (pun intended) that Until Dawn will be a huge disappointment. Many compare the game to Quantic Dream’s Heavy Rain and Beyond: Two Souls, games that also wrestle control away from the player and share a penchant for quick-time events and cinematic presentations. However, as an unabashed fan of those games, I can confidently say that Until Dawn doesn’t hold a candle to them. It hits all of the lows without coming close to any of the highs.

The demo I played involved climbing a radio tower and attempting to summon help after two teenagers realize they and their friends are trapped on the mountain and in serious danger. Although the demo was probably only fifteen minutes long, it felt like an eternity, since I had very little to do during that time. While Quantic Dream games are known for having sparse gameplay (press X to Jason), they appear almost overflowing with interaction compared to Until Dawn. The game almost never lets the player do anything besides choosing between one of two impossibly stupid dialogue options, slowly walking in a single direction, and selecting a handful of objects in the environment. It doesn’t help that the voice acting is irritating (although this is no doubt on purpose to mimic cheap horror films). I have nothing else to say about Until Dawn. I was left with one agonizing sentiment after the demo concluded with the death of both of my characters: that was a bit shit, wasn’t it?

A media scholar who also writes about video games for various outlets. He's interested in digital game production, media industries, residual media, and discourses around gender, race, and sexuality in media and production cultures.
MORE LIKE THIS
AlienationDrawn to DeathTearaway UnfoldedUntil Dawn