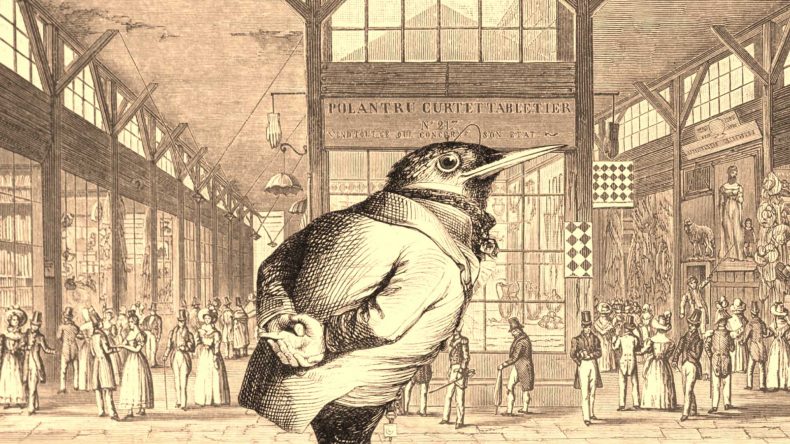 The courtroom drama and narrative charm of the Ace Attorney series has captivated me since it’s initial UK release in 2006. Larger than life characters and murder most foul, the games garnered an immediate following which I was happy to be a part of. I was unaware that the glaring problem with this series was a distinct lack of bird characters, until Aviary Attorney: Definitive Edition was brought to my attention. Set in 1870s France with a full cast of animal characters, the murder is “fowler” than ever before (collect your coat on the way out – Ed).

You play the role of Jayjay Falcon, a fledgling defence attorney. After finally receiving your first high profile case, you’re tasked with defending an innocent socialite in court and finally getting the kudos as a lawyer you need to succeed in Paris. With some help from your eccentric assistant Sparrowson, you’ll need to gather evidence and information that will help you win convince the jury that your client is innocent. Much like the series it takes inspiration from, Aviary Attorney has two main sections of gameplay: investigation and the courtroom. The investigation sections take you all around the city, talking to potential suspects or searching crime scenes. When searching the streets of Paris for clues, each area you travel to takes a day out of your calendar. With only a set amount of days to collect evidence until your court date, you often have to make a judgement call on which lead is more promising. You also have options of how to approach the key people in your latest case, putting too much pressure on an uppity feline can result in you losing potential evidence and struggling in the courtroom.

Not all investigations call for the same tack when it comes to discovering the truth. There are times where the only way forward seems to involve the spending of your carefully earnt Francs. Without getting the payday you need from a successful case, it may become necessary to take to the Blackjack table, or as its known in Aviary Attorney, Jacques-Noir. A simple game seeking 21 can net you a handy boost to your wallet. Inevitably, your court date comes whether you are prepared for it or not. Your time before the judge is quite simple – the prosecution will present witnesses, detectives and the like, and you will ask questions about key phrases in their testimony. When inevitably something seems unusual about a statement, you’ll need to use your hard earned evidence to prove something is amiss, and hopefully your client’s innocence. Unlike Ace Attorney success is not the only way to end a trial, and if you don’t have the evidence you need you might have an innocent client take an extended stay at his majesty’s pleasure.

It cannot be understated how funny a game Aviary Attorney is. Sparrowson is undoubtedly the star of the show in the comedy department. When searching a crime scene he’ll constantly chip in with terrible puns and goofy antics, and will often get overexcited when food is mentioned in an all too relatable way. Sparrowson also introduces you to some important mechanics, including the “Face Book” where you collect information about the citizens of Paris. There are a whole host of charming and over the top characters joining the law serving duo throughout the game. From a salty old war bird missing a hand (claw?) to a cigar smoking aristocat, the larger than life cast rarely fail to induce a smile.

It isn’t all laughter in the life of an Aviary Attorney however, and with France on the cusp of a revolution the game gets unexpectedly dark. Corrupt judges and potentially dangerous rebels soon become common in your adventure, and a shake up to the very heart of government seems inevitable. The twists and turns of the game’s story are incredibly intriguing, and I rarely felt that I knew what was around the corner on my quest for justice. Failing in certain cases can even shape how France deals with the shifting balance of power, with three entirely different final cases. The fact I’ve gotten this far into the review without mentioning the beautiful art style of Aviary Attorney: Definitive Edition is almost criminal (leave your coat; just go – Ed). Inspired by the work of 19th century caricaturist J. J. Grandville, it may be one of the most beautiful games I have ever played. Every scene is simply a piece of art, and I could spend hours just taking in each character’s jaw dropping portrait. The gorgeous monochromatic shading needs to be seen to be believed, and the accompanying classical soundtrack is a perfect fit for the setting.

I have very few complaints from my time with Aviary Attorney: Definitive Edition. The court cases are often a little straightforward as the focus of the game is more on collecting evidence. When asked where the blood from the defendants hands is from, choosing the only item with blood in it is hardly a brain teaser. I also thought it was over with too quickly, but I’m fairly certain that’s just because I loved it so much.

Aviary Attorney manages to be beautiful, hilarious and shocking all in the same breath. It mimics Ace Attorney is all the right ways, while also showcasing an entirely different world and a revolutionary story. It may not be the hardest or the longest game, but my adventures with Falcon and Sparrowson left me wanting more.

Court sections are a little simple
Over too quickly

Aviary attorney is the perfect homage to the Ace Attorney series. Beyond beautiful to look at, with a twisting story and hilarious characters that make you want more