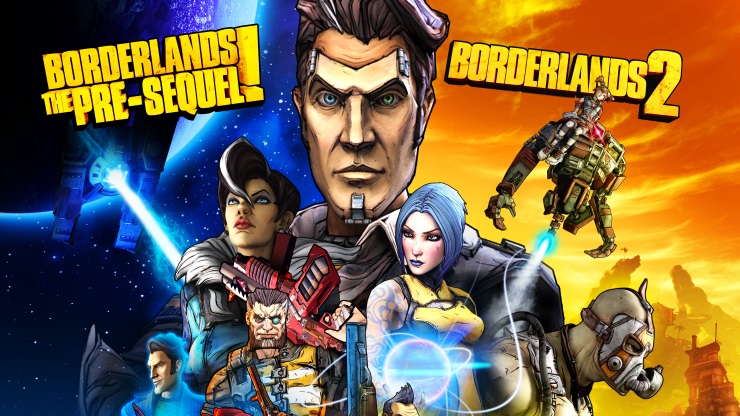 In terms of value for money, Borderlands: The Handsome Collection comes fully recommended. Two fully-fledged FPS-RPGs with all their (quite good, it has to be said) DLC content. That is hundreds of hours of content.

If you’ve played these games before you’ll know exactly what to expect. The remastered versions of Borderlands 2 and The Pre-Sequel still have their low-brow humour and ridiculous weapons draped over an addictive quest and loot system. Gunplay is satisfying, the famous ‘Gazillion Guns’ are mostly distinct from each other, and both titles have six characters to choose from so you can find one to suit your tastes. If you’re new to the series, or have even just played one of the games, you could do a lot worse.

The main stories see you searching for a fabled Vault on the planet Pandora and her moon, though you’ll find it hard not get distracted by the host of side quests on offer. These range from hunting Bullymongs (think Wampa from Star Wars with extra limbs), to planning a tea party for a psychopath. They’re incredibly varied, and never take themselves too seriously. The cast of characters are equally brilliant, each with a clear personality and introduced with a title screen that will make you laugh. While Borderlands 2 plays mostly like a regular shooter, The Pre-Sequel has you deal with low gravity and a limited oxygen supply that mixes things up nicely. If you’re following the story, though, you will want to start with the former, as the latter contains some spoilers. None of this will be a selling point to players who’ve exhausted both games already, and that’s where the upgraded graphics come in – the title is more than a reference to the series’ antagonist, because this collection certainly is handsome. No doubt it helps that the art style never really dates – just look at Valkyria Chronicles – but on PS4 and Xbox One everything has been sharpened up just a bit, with the entire collection running at 1080p, making it look better than ever. Gameplay is smooth as warm butter as well, running at 60fps even in two-player splitscreen (the drop to 30fps for three or four-player splitscreen is forgivable). The frequent texture pop in – though better than it was last-gen – is less easy to forgive however, even if it is momentary.

The only other issue with Borderlands is that it is good at everything, but the best at none – a Handsome Jack of all trades if you will. Destiny and Advanced Warfare have tighter gunplay, the loot cycle of Diablo 3 is more engaging – and it’s not as consistently funny as South Park: The Stick of Truth. Losing out to any of those titles is nothing to be ashamed about, but you’ll always have the sense that something does it better. Of course whom you play it with can dramatically affect your experience. The matchmaking is excellent, and you’ll be in a game within minutes of booting up your console, even if the default search is for LAN matches for some reason. When you get a team that works together, Borderlands is glorious, ploughing though quest after quest and leaving carnage in your wake. When you don’t, however, things get messier. Any player can initiate travel, but you have to wait for everyone to get out of a menu, and trips to a hub can take an age, with players running around doing all the quests within them. It can get confusing, and mean you have to wait for twenty minutes until everyone is sorted before getting back to shooting things.

You can choose to go solo, which would sort this problem and also mean you can follow the story easier – jumping around missions online means you’ll miss a lot – but alone the gameplay can feel a little bit dry. Not to the point where it’s not fun, but you’re aware Borderlands has been designed to be played in multiplayer. Having all the DLC at your fingertips can be a little overwhelming as well, as it all unlocks from the very start of the game, but complaining about there being too much content feels churlish. There are some other nice touches for returning players. The automatic carrying over of your Badass ranking – which brings cross-character buffs – is cool, and the option to transfer your previous characters to the new game means you don’t have to start all over again if you don’t want to.

The bottom line is that Borderlands: The Handsome Collection is two fantastic shooters, each worthy of your time, with a ton of DLC and polished up to look their best. If you’ve played both games and their DLC already there’s not much here for you aside the faster frame rate, better visuals, and chance to play on your shiny new console. But if it’s your first time as a vault hunter, this is without doubt the best place to start.

Read our Borderlands: The Pre-Sequel review.

So much content.
Literally all of the content.
You won’t need to buy another game all year.

Two great shooters for the price of one.

2K Australia to Close its Doors