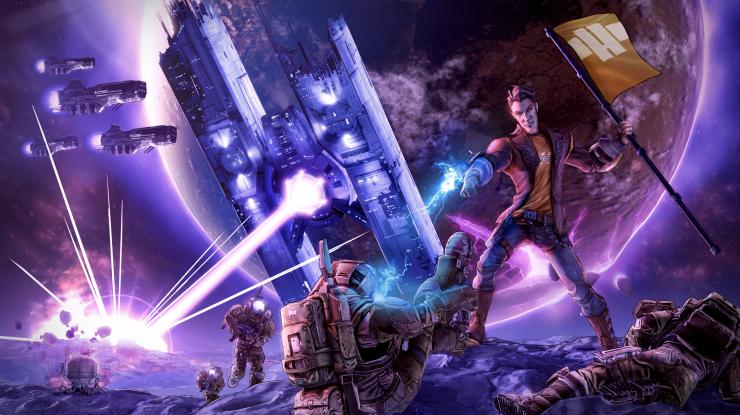 Consistency is an oddly endearing quality. You’d think it might make a thing boring – especially a video game IP that should thrive on innovation and unpredictability – but in the case of 2K’s Borderlands franchise, consistency is key. We know what to expect going in: a ballsy, irreverent blaster brimming with insane guns and eccentric characters. And Borderlands always delivers exactly that.

The Pre-Sequel saunters into the franchise sideways to insert itself in a soft warm spot between Borderlands 1 and 2, or at least the framework does, as Lilith, Roland, Brick, and Mordecai interrogate Gladiator Athena about her relationship with Handsome Jack. The actual plot, narrated by a captive Athena, takes place in an undetermined period in Pandora’s recent past. It tells of a different side to Jack, painting him in a sympathetic light in a time before he lost his face and became the mass-murdering psychopath we all loved to hate in Borderlands 2.

In this story he’s an employee of mega-corporation Hyperion, and not yet the CEO, thus he begins by heroically saving your life by blasting you out of a giant “Moonshot” cannon designed to transport supplies between Hyperion’s gargantuan H-shaped space station and Elpis, Pandora’s moon. Having recently endured a natural catastrophe known as “the Crackening”, Elpis is in disarray. Scavengers roam the rocky wilds and the wildlife has mutated into flesh-eating monsters. As the setting for an off-the-wall sci-fi shooter, it’s unquestionably awesome. The messed-up gravity of Elpis lends the game a permanent quirk, as whenever you go outside you’ll take slower, longer strides and be able to jump thirty feet into the air. Strapping on the new, equippable “Oz Kit” (according to the lore, it was supposed to say “O2”, but there was a cock-up with the manufacturer) will allow you to double jump, whereupon pressing B will momentarily enhance your personal gravity field, effectively allowing you to “butt-slam” any enemies below you. In true Borderlands style, each Oz Kit comes with various buffs depending on whether or not you’re in atmosphere, and has various extra effects for the aforementioned booty-slam.

Of course, fighting out of atmosphere brings its own problems, as your oxygen will slowly deplete. You can collect refills from downed enemies or grab a breath of air by either standing on a glowing oxygen vent or activating one of the O2 recyclers you find dotted around the maps. It adds a certain sense of urgency and recklessness to some of the alfresco battles, as you weigh up the risk of getting shot in the face as you make a daring charge for a dropped Oz canister with staying behind cover and probably suffocating. Apparently, your eyes will pop like grapes.

The quartet of Vault Hunters hired by Jack and Hyperion are a diverse bunch, rocking enough individual personality to stand out before you even consider their unique skill-sets. Athena the Gladiator is an agile sort, able to whip out an energy shield to soak up bullets before she thrashes it, Captain America-style, at her enemies. Nisha the Lawbringer carries a whip, and activates a special skill that auto-aims at bad guys and makes it impossible to miss. Brutish Enforcer Wilhelm comes equipped with two drones, Wolf and Saint, who deal out damage and heal the party respectively, while Fragtrap (yep, one of those annoying CL4P-TP robots) has a roulette-style special skill that evaluates the battlefield and reacts accordingly, spewing out minions to do his bidding based on what’s needed most. This being a Claptrap, it doesn’t always go as predicted. New guide Janey Springs enters the story early on and helps you find your feet in Elpis’ capital city, Concordia. As you’d expect, Janey is mad, treading the fine line between endearingly eccentric and disturbingly sociopathic, like an older, Australian Tiny Tina. Scripting and characterisation are pin-sharp, as always, and there are beats to both the dialogue and the narrative that expose genuine emotion within all the craziness. Learning small, half-delivered facts about Janey’s tragic past, including how she got the scar on her belly and the reasons behind the blood spattered across the walls of her tiny domicile are almost as effective as piecing together what happened to Tiny Tina’s parents, and it’s these moments that remind you that Borderlands may well be skewed towards the utterly bonkers, but it also tells a collection of very human stories.

Returning characters make you feel instantly at home, and 2K Australia have done a commendable job of including all of Borderlands soap opera-sized cast of players in (mostly) believable ways. Even Torgue pops up during the interrogation voice overs, and Moxxxi, Scooter and, of course, Jack himself, play fairly prominent roles in the narrative. But we didn’t come all the way to Elpis for the drama, right? No. We came for the guns, and Borderlands: The Pre-Sequel delivers them in mountains. While each of the new characters works wonderfully well either solo or as part of a team, their unique, intricate skill trees are helped ably by the ridiculous variety of guns and equipment on offer. Shields, class mods and grenade mods are joined by the aforementioned Oz Kits to let you tailor your character more than ever, and the new weapon types are so cool you wonder why they weren’t already included. Cryo energy freezes enemies, while the new laser weapons burn through baddies and obstacles equally.

As before, the Pre-Sequel sometimes throws too much loot at you. To begin with this is great, as every tiny improvement is a massive boost at lower levels. The higher you get, though, the more rare and legendary loot you’ll start to see, at which point those different effects and stats can make you spoiled for choice. It’s all too easy to opt for the pistol that rapid-fires Cryo rockets just because it’s the coolest thing you’ve seen all day, but the enhanced difficulty means you’ll need to be more selective than that.

In fact, The Pre-Sequel feels geared more towards teaming up. An early boss is a nightmare to fight alone, as you struggle to hit him with woefully inaccurate guns, and his heat-seeking energy balls annihilate your pathetic starting shield in seconds. Death returns you to a New-U machine at the cost of cash and pride, but it’s still annoying to keep having to run all the way back and start again. The bosses in general are tough to solo, and those who prefer to play that way may feel the scales are tipped slightly against them for a lot of the game, even if it is somewhat offset by the improved loot and gear later on. The cel-shaded, cartoonish Borderlands style is present and correct, but Elpis doesn’t boast nearly as much variety in its environments as Pandora did in Borderlands 2. It’s not something that really brings the game down, but a little diversity of colour and landscaping would have been welcome. That said, some of the vistas are excellent. Not as breathtaking as Destiny, admittedly, but impressive nonetheless.

Jammed full of the nuts-out, irreverent humour that has come to be synonymous with the brand, Borderlands: The Pre-Sequel firmly refuses to fix what ain’t broke and delivers what arguably amounts to a feature-length expansion to Borderlands 2, but still manages to be utterly engrossing at the same time. Looting, laughing and butt-slamming your way across the moon couldn’t be more fun.

Compelling, funny campaign
Characters are diverse and fun to play
It's more Borderlands 2

This may be Borderlands 2.5, but it's still a hugely entertaining adventure in its own right, filled to the brim with loot, laughs and laser guns.