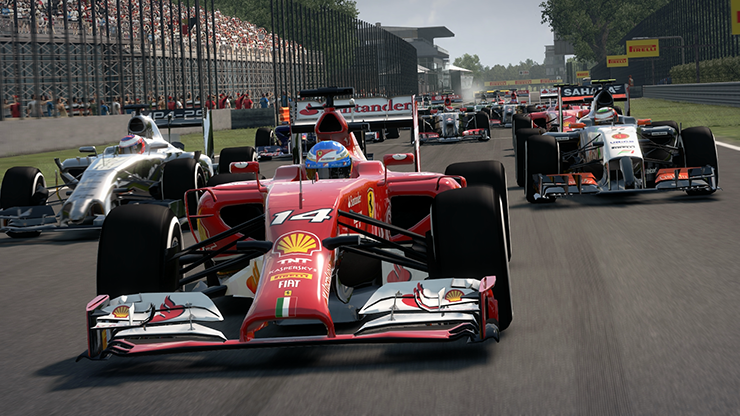 It’s easy to misunderstand F1. It’s easy to just look at those stylish, super powered cars practically meandering around the track and think, that’s not terribly exciting. Indeed, when I was younger that’s exactly what I’d think, catching glimpses of a Sundayafternoon race at 3pm that didn’t look much different to how it was at 2pm. In fact, I used to frustrate my Dad by perching on the arm of his chair for the first corner, and then leaving in an exasperated hurumph if there wasn’t a spectacular crash.

If nothing else, Codemasters’ F1 games do a fantastic job at showcasing the actual appeal of F1 as a sport, and F1 2014, being a traditionally iterative sequel, continues this laser-sharp focus. It’s telling when the main draw of a title is to experience the rule changes within the real life sport, as opposed to any sort of standout mode or gameplay feature.

This could be largely because Codemasters are busy preparing their true next-gen F1 game behind the scenes, and this is more of a stop gap. We’ve known for a while that F1 2015 will be the first outing for the super cars on Xbox One and Playstation 4, and that F1 2014 is the last hurrah on older tech. This fact isn’t intended to besmirch F1 2014’s release, it’s more a warning to series stalwarts that you won’t get much new in F1 2014. But then if you’re the sort to buy year in and out, you’re probably sold on simply being able to race with the new rule adjustments and up to date cars anyway, and all of that is as finely tuned as you’d expect from the passionate racing minds at Codemasters.

That is the crux of the matter: F1 2014 is created for F1 fans so it makes it a tough game to critique in the usual manner. What you have in a title like this is worlds apart from the score focused off road bouncing of Forza Horizon 2, and even the strangely stale circuits of Drive Club. That second one is an interesting point of comparison, actually. Where Drive Club is actively told off for its muted stylings, F1 2014’s clean edges and minimal presentation is more indicative of the sport, providing authenticity for the fans.

But the presentation nails the view one must draw of F1 2014 as a whole; every element of its design is tailored to the sport. It’s not personality-free (the way your driver will raise their hand in a very British ‘argh’ mannerism after a collision is a surprisingly astute bit of characterisation), but it’s accurate to the sport. You won’t be getting “cool drifts”, but the joy of a tidy corner is its own reward. In fact, the only clear “issue” with F1 2014 is that it’s tough. It’s telling that the difficulty of a stage has more to do with how many assists are on by default, and whether there is dynamic weather or not, rather than actual racer AI. The AI in F1 2014 is ruthless, punishing you for bad turns immediately, and speeding away with no intention of letting you catch them up easily. Hamilton in F1 2014 is as effective and deadly as he should be. Authenticity.

I only mark this as an issue because Codemasters have attempted to take steps to ease players in with a License Test when you first load the game, but given the ferocity of the core design itself, this feels largely ineffective. This race is intended to find your difficulty, and advice on what assists it recommends, but you’ll still be struggling to find the front of the pack before you’ve had a huge amount of practise due to the AI. No amount of Flashback mulligans will help that.

F1 2014 requires a deft touch, you see. You’ll need pedals or analogue triggers, and you need to learn subtlety. Slamming the pedals will do you no favours, and it’s not until you learn to go easy on the pedals that you’ll even begin to stay ahead of opponents, let alone catch those in front. But this is all part of the learning. F1 2014 offers a competent number of ways to play, from short Grand Prix, Full Seasons and online, to the best learning tool of all in the shorter event races in Scenario Mode. Scenario Mode races give you, well, a scenario – some taken from real occurrences in the sport, some created by Codemasters themselves – and ask you to accomplish a specific goal. From catching up to others on a rain soaked track after an unfortunate spin, to stopping an opponent overtaking you on the last lap of a race, the descriptions and gameplay of these shorter races help develop your appreciation of the sport’s nuances, and give you shorter experiences to work on your racing technique. Then you can take this knowledge into the long, endurance testing Career mode and truly feel how much of a mental slog a Formula 1 race truly is.

But again, this isn’t new. Scenario mode is an expanded idea from F1 2013. A great mode, but still nothing massively new. Even without having any headline stealing innovations, F1 2014 is still a finely tuned, expertly crafted testament to the sport, and great way to experience the trials and tribulations of meandering a stylish, super powered car around a circuit for an hour or so – heck, I can even be the cause of those crashes I so desired. Sorry again for all of that, Dad.

Slavishly authentic attention to its source sport.
Scenario Mode offers an insightful window into the nuances of Formula 1.
Tricky controls and aggressive AI will improve your appreciation of the sport.

Ferocious difficulty may be off putting for more casual fans.
Lack of any truly new features.
Bare bones feature suite.

F1 2014 is a very iterative update, with no great new ideas, but it’s still an expertly crafted testament to its source material.