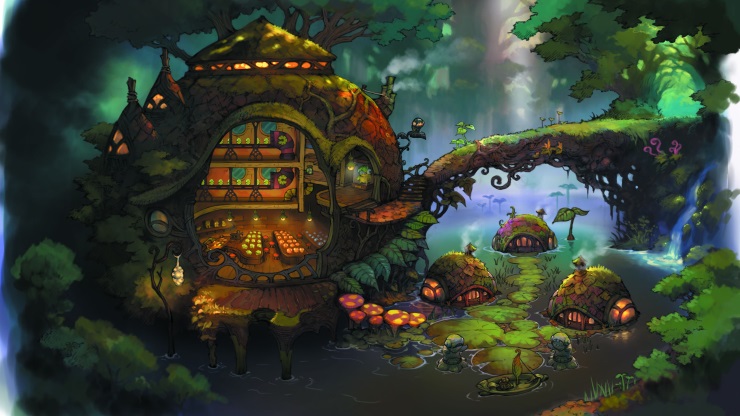 There came a point during Bravely Second where I was absolutely stuck. I had come up against a boss fight that might as well have been a brick wall: it was powerful, it laughed at my pitiful magic and physical attacks, and it kept healing whatever damage I did do to it. It took me several hours of tweaking my equipment, changing around my abilities, even grinding up a few levels. But you know how I finally beat that son-of-a-gun? A party of four Monks, unarmed and unable to do massive amount of damage. After hours of determination and experimentation, I felled the boss with an onslaught of punches.

And that’s Bravely Second for you, a game whose entire mantra is “If at first you don’t succeed, try, try again”, and that’s mechanically, thematically, and narratively. At heart it’s practically a carbon copy of the original Bravely Default – and let’s face it, if your 9/10 reviewed game ain’t broke, you don’t really want to fix it. To be honest, you could put screenshots of both games side by side, and you’d struggle to find the difference, as you’ll recognise a few locations, characters, and enemies from that outstanding first outing. Yet, even for a game that has a story which follows on from the original, there’s enough exposition to ensure that even those dipping bravely (sorry) into this second game can understand what’s going on – although you’ll definitely get a better grasp of what’s going on by playing through the original (especially as the opening parts of the game include massive spoilers for Bravely Default’s ending). It’s great to be able to catch up on Luxendarc after prior events, as beloved characters return to be joined by new cast members, although the recycling of content can be a little disappointing at times.

Once again, there’s a massive focus on the Bravely and Default functions in battle, allowing you to control the flow of battle by defending to stock turns, or using multiple turns in advance to get quick victories. But player beware, making all of your party members use the next four turns in one go might allow you to quickly dispatch of foes, but if any of them survive this onslaught, that’ll have those four turns themselves to fight back. But now there’s an ever greater reward for destroying the enemy in double-quick time: crush them in one turn, and you’ll have the opportunity to immediately fight another round of enemies, while retaining the number of turns you have left, to multiply the rewards for that battle. You can increase your multiplier by continually winning in one turn, and you can really rack up levels, gold, and job levels. The risk is that you’ll end up being in a deficit of turns, meaning enemies have free reign to take you down, and you’ll lose everything by falling in battle. This new system is a great way of grinding levels in a shorter amount of time, without breaking the systems.

Not that you’ll really need to grind all that much, as this adventure isn’t massively tricky aside from a few really tricky boss fights. In a nice touch, the area map of each dungeon tells you what range of experience levels it’s intended for, so you can easily figure out if you need to grind up a few levels. As per the previous game, it’s also possible to change your enemy encounter rate, increasing it to make the game hard or to grind levels, or to decrease or even turn off encounters altogether; which is great for exploring levels for items, or if you’re just in a rush. Battles can be fast-forwarded, and it’s even possible to repeat previous turns or even create macros to record and execute turn actions, meaning you don’t even need to do anything to fight battles. Even more so than Bravely Default, this is a JRPG that respects your time, and really gives you myriad options and tools that allow you to play your own way. If you really want to, it’s entirely possible to play the game with your left hand, for example. Admittedly, this is a relatively linear sort of JRPG, although there are side-quests which are mostly limited to unlocking new jobs. The setup for these diversions revolves around a dispute between two people, each one being of a different job class. You’re asked to step in and pick a side, and you’ll end up fighting the faction you disagree with. Fight them, beat them, and unlock their Job class. But choose wisely, as you can’t get the job belonging to the side you agree with unless you play through again in New Game Plus and pick the opposite options, of course.

As for these jobs, there’s a whopping thirty of them, and they all have their uses. If you’ve played any game with a job system, especially games like Final Fantasy V, then you know what to expect. You’ve got your default freelancers, your magic-based classes (white, red, black, wizards), even Catmancers (Second’s implementation of the always popular blue magic/enemy skills job function). There’s a great deal of opportunity for experimentation and see which combination works for you, and while I did lean towards an offensive-heavy team of four monks, it wasn’t always the best approach, especially for bosses. Leveling up jobs and using their unlocked abilities with other jobs allows players a whole lot of room to mix-and-max roles, enabling a healthy balance of offensive maneuvers, buffs and heals. Those who played through the entirety of the original will feel right at home with this sequel. The visuals remain the same with a whimsical art style that instills a sense of nostalgia for the classic 16-bit golden age of the genre. The dialogue is quirky and relatively well-written, filled with in-jokes and punchlines; not to mention a whole lot of character. You get a good feel for the relationships between your party members and the familiar (and not so familiar) characters that are encountered. Meanwhile, the voice acting that occurs at many points is of a very good quality, especially for the 3DS. It would be hard to not be impressed by the general presentation of Bravely Second, but that will be of no surprise to those who played (and no doubt, loved) the original.

Granted, this is a sequel that almost a carbon copy of Bravely Default, as you would expect. It doesn’t shake things up, but it does offer incredibly rewarding gameplay mechanics, a cast of likeable characters, and plenty of new additions and tweaks. From grind-happy obsessives, to those whose love for the genre might have lapsed, and are looking for something to bring them back, this a must-buy game for fans of Bravely Default, as well as anyone who loves JRPGs. Anyone for a Bravely Third?

The Job System remains a joy to experiment with.
Plenty of ways to tailor your gameplay experience.
Avoids the usual grind of JRPGs.

For a JRPG, there’s rarely a reason to walk off the beaten path.
Recycled areas and characters gives a sense of deja vu.
Doesn’t have quite the same impact of the original.

From grind-happy obsessives, to those whose love for the genre might have lapsed, and are looking for something to bring them back, this a must-buy game for fans of Bravely Default, as well as anyone who loves JRPGs.