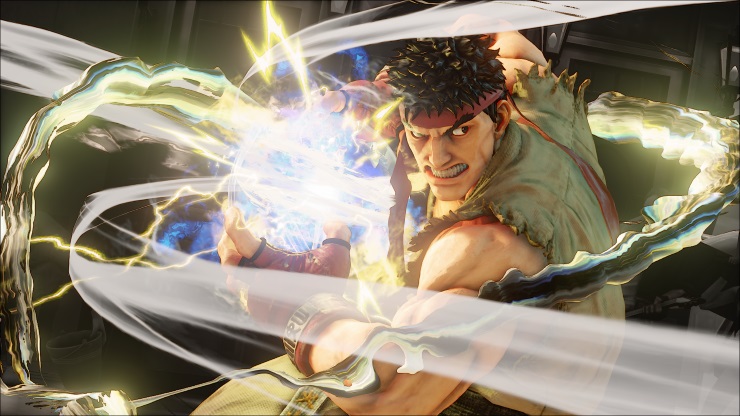 Let’s get the bad news out of the way: Street Fighter V is releasing without a few of its modes. Challenges, the full cinematic story, and the in-game store are all missing at launch, meaning things are looking temporarily a little threadbare for the solo player. Fortunately, regardless of what’s missing, nothing can take away from the fact that the fighting on offer here represents the franchise at its very best. Street Fighter V feels and plays like a reflection of everything Capcom have learned over the years making it the most intuitive, well-balanced, and engaging entry in the series to date.

Running on the Unreal Engine 4, it’s less cartoony than its predecessor – darker, edgier, and packed full of beautiful little details; check out how clothing swirls around during battle, how fighter’s expressions change with every punch, kick, and fireball. Individual muscles and textures on outfits are amazingly detailed and special moves are accompanied by streams of neon light which follow the movement of individual limbs, smearing your screen in colour.

The ten stages across which battles take place are also nicely varied, lavishly detailed, and react to the action taking place, giving the fights a real sense of weight. You’ll make gas canisters explode at the Shadaloo Base, and knock opponents through the doors of a bus on Bustling Side Street whilst onlookers spill their drinks or are knocked off their feet as you perform a particularly meaty attack, and all at 60FPS without so much as a hitch. And so what of the modes that are included at launch? Story mode, described by Capcom as a prologue to the “cinematic story expansion”, is exactly that, no more than a quick introduction to the characters, I completed all of the content here in just shy of an hour.

Training and Survival modes, in the temporary absence of Challenges, are where players can really get to grips with the new V-system mechanics. As is standard in survival mode you are tasked with surviving a set number of fights with your health and ex-gauge carrying over between bouts. Each round earns you points which can then be used to purchase various power-ups to sustain you through the next fight. Refill your health bar, V-gauge, or Ex Gauge; increase your defence and attack power or, if you’re feeling lucky, double down and handicap your character in a variety of ways in order to add a multiplier to your score in the next battle. There are lots of ways to affect how your score adds up and putting together a successful and stylish run of wins is addictive and will easily give solo players more than enough to do between now and the rest of the modes dropping. I challenge anyone to clear Hell difficulty with all 16 fighters before the rest of the game modes get here.

But of course online is where most of the interest and longevity lies in a fighting game, and Street Fighter V’s suite has plenty of options. You can take on warriors from around the world in the usual assortment of casual and ranked battles but there is now much more depth and detail to proceedings. Through the Capcom Fighter Network you can pore over endless stats, personalise your battle avatar, see which moves you and your adversaries employ most, watch replays to hone skills, assign favourites and rivals, creating lists of preferred fighters and, eventually, invite up to eight other players into battle lounges. Add to this the fact that PS4 and PC fighters can face off against each other and this feels like the most feature-rich online experience in a Street Fighter game to date. It must be noted, though, that lag and long waiting times between fights has been an issue, fingers crossed they get it sorted pretty quickly after the official launch but for the time being connection has been a mixed bag. Series producer Yoshinori Ono has stated that, more than any other Street Fighter, this one levels the playing field between new and pro players, and it feels like it. Street Fighter 4’s overly-fussy Focus system has bitten the dust, chip damage can no longer be used to finish off an opponent and landing combos: one of the biggest hurdles faced by casual players is now much easier, removing the need to be a plinking expert to start cranking out maximum carnage. You can jump right in here, the new systems are intuitive and even the most casual players will be pulling off screen-filling super attacks in no time. I always felt like I was missing a piece of the puzzle in Street Fighter 4, like some of the systems at play were beyond me, here I feel as though I totally understand every aspect of what’s going on during battles and it makes the game all the more enjoyable, I don’t feel like I’m struggling against anything other than my opponent. Capcom has re-explored a number of elements from previous entries in the series, particularly Street Fighter 3 and the Alpha and Ex games and come up with the V-system, an all-new dynamic which is at the heart of everything that makes Street Fighter V tick.

The all new V-Gauge, filled by absorbing attacks from your opponent, adds three new techniques to a fighter’s repertoire: V-Skills, V-Reversals, and V-Triggers. V-Skills give fighters various new abilities; Ryu for example can parry attacks, whereas Vega can stylishly avoid incoming projectiles. V-Reversals are easy-to-unleash counter moves which enable players to turn the tables on their opponent, instantly manoeuvring them out of tricky spots. V-Triggers drain your entire V-Gauge in return for a powerful ability. Ryu’s V-Trigger (the Denjin Renki) electrifies his special moves, turning him into a ferocious attacking force; his fireball becomes more powerful, chargeable and capable of smashing through enemy defences, whilst Chun Li’s Renkiko adds attacking power to her normal moves, the heavier the attack the more damage is added. New character Necalli, meanwhile, transforms entirely when his V-trigger is activated, a state which then lasts for the rest of the round, gaining him a brand new set of combos and different critical art. The V system introduces a beautiful back and forth to battles. There’s always a means of escape, always another way to turn the tables and come back at your opponent. It also adds a real sense of uniqueness to the roster of fighters. There are no clones or filler characters here, each and every one of the sixteen combatants has got real depth thanks to the new systems at work and, more than ever, I’ve found myself experimenting, not just sticking to what I feel comfortable with.

And what of those new characters? Laura, Rashid, and Necalli all feel like solid additions to the roster. F.A.N.G. on the other hand, is definitely my least favourite fighter in the game so far: all charge attacks and poison, he’s a gangly, awkward combatant. Although, I do love his Coward Crouch attack, easily the closest you’ll get to John Cleese’s Ministry of Silly Walks in a fighting game.

Laura is a powerful grappler, Rashid is a fast, flashy, offensively-minded character who zips around the screen, capable of Vega-style wall jumps, he’s hard to pin down, although I do worry slightly for his defensive capabilities. Necalli is probably the standout of the new additions: a snake-haired Aztec warrior, he’s a tough mixture between brawler and all out-attack character and, yeah, has one of the best V-Triggers in the game. Elsewhere, Nash, Karin, and R.Mika are all extremely effective; Mika in particular has become a firm favourite of mine, her flashy wrestling moves and throws look amazing and are powerful and easy to pull off. Old favourites have also had makeovers and had their movesets rejigged. Vega can remove and replace his claw at will; changing up his style between ferocious slashing attacks and throws. The now grey-haired Bison has lost his Psycho Crusher attack from normal play, available now a critical attack. He’s also slower on his feet here but makes up for his lack of speed with devastatingly powerful attacks and high defence stats. With the initial six DLC characters (Alex, Guile, Balrog, Juri, Urien, and Ibuki) set to join the action on a monthly basis starting in just a few weeks, there is no shortage of fighters to sink your teeth into here.

Speaking of DLC, this version of Street Fighter V is, apparently, the only version you’ll ever need to buy, no more Super or Ultra editions, and all future content will be available for free via the in-game currency, Fight Money is earned by completing character stories, playing survival mode, winning online matches, and leveling up individual characters. Players who wish to unlock DLC characters immediately rather than spending time earning Fight Money also have the option of purchasing a Season Pass. Will it realistically be possible to earn enough Fight Money to unlock all the DLC characters for free? Well, Capcom has assured players that by completing all of the content in Story mode they’ll have earned enough to unlock the first DLC character, Alex, costing 100,000 FM and story mode costumes will set you back 40,000 each. Leveling up a character earns you 1000 FM per level and, beyond winning fights online and completing daily challenges, more ways to earn Fight Money have been promised for the future. Street Fighter V is very much being sold as an ongoing service which will be expanded over the rest of this console generation and, with its emphasis on levelling the playing field to entice new players alongside its already dedicated and passionate community of fans, this feels like a rock solid foundation from which to build over the coming years. With plenty of content set to drop and balances to the gameplay being made freely available, rather than sold as Super or Ultra versions of the game, anyone who jumps in should be well served for the foreseeable future.

The new V system and updates to the fighting system make this a deep and gloriously fun fighter for pros and casuals alike. With a cracking roster of characters, a deep suite of online options and more single player content on the way, it’s hard to find fault with the bigger picture Capcom has in mind here and, assuming the online issues are dealt with quickly at launch and the rest of the game modes arrive as promised, this is looking like a perfect round.

The most beautiful, fluid and accessible Street Fighter to date.
V-System is an inspired addition to classic gameplay.
Deep and varied roster of fighters.

Missing modes at launch.
Online has been spotty so far.

It’s hard to find fault with the bigger picture Capcom has in mind here and, assuming the online issues are dealt with quickly at launch and the rest of the game modes arrive as promised, this is looking like a perfect round.