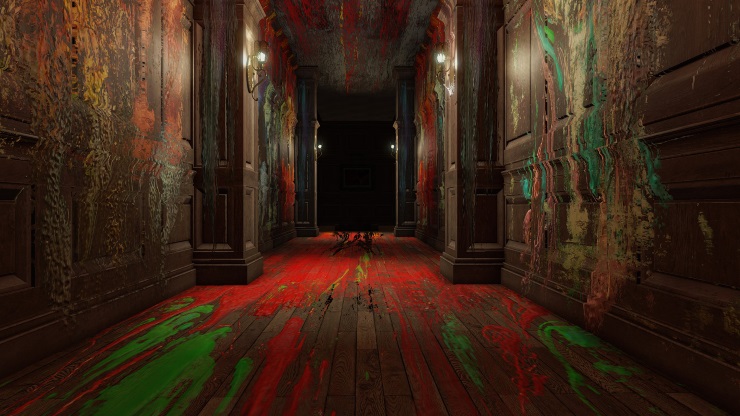 A blank canvas can be a terrifying thing. So much so, that it can drive an artist to sheer madness. That’s the premise of Layers of Fear, a horror game which attempts to portray the struggles of a 19th century artist as he attempts to create a masterpiece, taking us on a psychosis-fuelled journey as he attempts to paint the perfect picture.

While the environments are crisp and have a certain Victorian finesse about them, maneuvering around them can present some frame-rate issues which make movement feel sluggish and jittery. This is especially noticeable in the final areas, where environments become more cluttered and various effects are used to make the world seem nightmarish. But for the most part the rooms look splendid and offer a sense of claustrophobia as they change around you, leaving you confused and disorientated.

In terms of “psychological” terror, it somewhat misses the mark. In the opening hour or so, jump-scares are present in almost every room and soon becomes simple to predict. There is no such thing as a slow burn: where other games bide their time to freak players out, lulling them into a false sense of security, Layers of Fear presents a tirade of screams and jump-outs to middling success. There is simply no buildup, no true atmosphere of despair: only screams and a flying piece of furniture every ten seconds. It should be noted that this improves from the middle of the game onward as the scares seem to become more inventive, but it feels that the damage has already been done: you’ve become so accustomed to being jump-scared that you tense on cue and the opportunity for a tremendous fright is wasted. For the most part, the frights you do come across are clichéd and something you’ve likely seen before. Bookcases launching books across the room, telephones smashing into walls – the usual. If you play a lot of horror games, these are easy to see coming. I began to lose count how many times I went to exit a room, found the door locked, then turned around to some freaky painting staring right in my face. PS4 players may also recognise a carbon-copy of Lisa from P.T. lurking the hallways,shaking violently and grabbing you in a very similar manner to the original.

Gameplay involves little else than walking from room to room and interacting with objects in order to unlock the next area. At some points it feels so linear that it could pass as an on-rail experience, instead of a horror game. While some games can captivate their players with such simple gameplay but offer a magnificent and unique story, (see Gone Home, Everybody’s Gone to the Rapture) Layers of Fear commits the cardinal sin and just feels boring. Rarely did I feel motivated to continue onto the next area for any other reason than finishing the game and getting rid of the arrogant, unlikable character I was controlling. The story holds little appeal, which is unfortunate: it seems so set on enticing you with little tidbits of information to keep you going. Split into segments, the player is tasked with finding a piece of painting equipment in each and returning to their studio to use them to advance their masterpiece. As it progresses, the rooms and hallways further deviate from their immaculate origins and become more dilapidated, resembling the decaying world of Silent Hill or an abandoned asylum. Players can find interesting objects which give a further insight into the story when they hear whispering coming through the DualShock 4 speaker, meaning they are nearby. The story gets darker as the game progresses to match the more trippy, grim surrounding. Floating decapitated heads, crazy little dolls and grotesque paintings decorate the rooms and connecting hallways, but even these freakish inclusions can’t stop Layers of Fear from feeling dried out.

Innovation in the horror genre can be a tough thing to achieve, especially when there are so many successful formulas already out there. Layers of Fear is a middle-of-the-road experience which seems intent on scaring the player into a catatonic state in the first hour so that they don’t pay attention to the recycled and predictable story. It must be commended on its wonderfully dark environments and frequent visual tricks which confuse and unsettle, but unfortunately two rights still make a wrong. Even with its flashes of excellence, Layers of Fear is still heavily weighed down by its hellish pacing, frame-rate issues, and predictable scares.

Wonderfully mischievous visual tricks and grim environments can’t stop Layers of Fear from falling flat with its hellish pacing, framerate issues and scares you can spot a mile away.

Should Gamers Worry about Internet Security?
Evil West | 6 Tips to get you started
Pokemon Scarlet and Violet Legendaries | How to find and unlock Legendary Pokemon
The Devil in Me | How to keep everyone alive
The Devil in Me | How to kill everyone
Escape Academy: Escape from Anti-Escape Island Complete Walkthrough
Escape Academy Take to the Skies Walkthrough
Social Media
SUBSCRIBE
All content copyright GodisaGeek.com
Fonts by Google Fonts. Icons by Fontello. Full Credits here »
Posting....