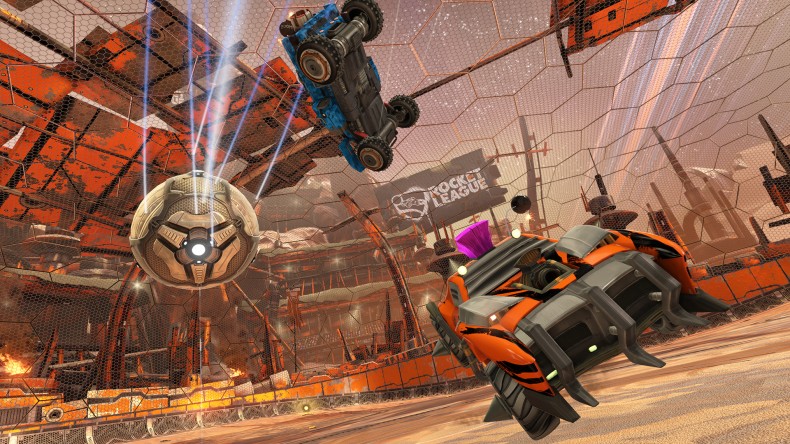 Let’s just get this out of the way: Rocket League is, by far, one of the best multiplayer games available today. A huge hit on PS4 last year when it was released as part of the PS Plus deal for subscribers, and it has rightly received plaudits a plenty for its frantic physics based take on the arcade-style football game. And now, Xbox One players get to experience what all the fuss was about.

There are very few changes from the PS4 version, with Xbox owners getting a few cosmetic unique items like the Halo Warthog and Sunset Overdrive orange goo for the nitrous trail, but the basic game looks, sounds, and plays exactly as it does elsewhere.

The beauty of Rocket League, and where it shines, is the simplicity of it. You play games of one versus one, or in teams of up to four against each other in a Mad Max style arena where you can drive on the walls and even on the ceiling with enough power. You even have a jeering crowd to laugh at your mistakes and cheer your victories. Your character is a rocket-propelled “Battle Car”, and your task is to put a huge, over-sized ball in to the back of the opposing team’s net more times than they do yours. You can’t get more straightforward, and it is true what they say: the simple things really are the best.

As simple as the premise of rocket-fuelled vehicular soccer is, Rocket League is a difficult game to master. Most matches are a frenzy of over-eager players trying to get any hit on the ball, so games more readily resemble an under fives Sunday league football match where it’s just a huddle of players chasing the ball, rather than a coordinated ballet of skill and tactical play. But that is, in part, what makes it such a compelling game.

Players start at a rookie level, and gradually through playing the game you can raise through the ranks to become a professional. Progression doesn’t really mean anything other than the time you have put in to the game, but there is a hope that over those hours you will develop some finesse. It is entirely plausible that you won’t manage it, though, and you are still madly chasing the ball around the arena and pulling off the flukiest aerial goal the world has ever seen, and celebrating it like you’ve just won the World Cup.

And when a goal is scored, it’s like an explosion of happiness. A horn sounds and the cars all fly off into the air with the name of the goal scorer there for everyone to see. It’s a rush. A mad, adrenaline fuelled rush.

The controls are expertly balanced, allowing for incredible manoeuvrability of your car. You can boost, but be careful because it isn’t infinite, although it can be replenished by driving over little power-ups in the arena. As you progress through the game and learn some skills you will quickly realise that controlling and managing your boost is the key to becoming great. You can use it to smash the ball in to the back of the net, or take out an opponent before they perform their perfect strike on your goal, or you can save a little bit to perform a perfect aerial shot in to the top corner of the net.

There is a practice mode in which to perfect your skills like making an aerial save or taking a shot on goal, even perfecting the art of flying. An offline tournament mode against bots is also available where you partake in a season against a number of bot teams to be crowned Rocket League tournament champion.

It’s is a game designed to be played with other players, and perhaps its most endearing feature is the ability to play four player split-screen local matches. Four people crowded in one room jeering at each other is an absolute delight. If you don’t have enough friends, or you are a little too intimidated to take your skills online, you can set up matches against bots with difficulty of your choosing and practice that way.

There is very little to criticise about, but perhaps the cars could be made to feel a little weightier, and the physics do seem a little off at times, but it seems churlish to pick up on these things when what has been delivered by Psyonix is a fantastically fun, frenetic multiplayer game. You don’t need to like football, or even driving games to enjoy Rocket League, just some friends, a couple of controllers, and a perfect “BACK OF THE NET”.

Physics are a little floaty.

One of the best multiplayer games available today. Rocket League is a fantastically fun, frenetic game and you'd be hard pushed to find a better arcade-style football game anywhere else.