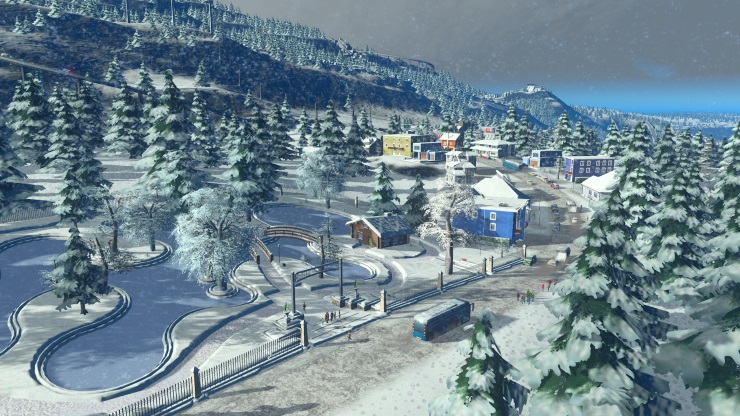 As a fully-developed human being who can gauge the passage of time, you’re probably aware that we’re well into February now. Christmas has been and gone, the extra pounds around your midriff have (hopefully) dissolved, and Santa is still done in from delivering all those presents. I mean, that’s what you’d think, right?

Not Colossal Order. It seems they’ve been inspired by the seasonal commodities of the winter months and have created Cities Skylines: Snowfall, the latest precipitous expansion to hit the expansive city-builder. Not only can your so called ‘Cims’ go out after dark and unleash their inner party animals after a long day at the office, they can now go sledding and skiing and carolling in the snow.

Okay, so maybe Snowfall doesn’t deliver any of the winter-related activities mentioned above, but that’s what our imaginations are for, right? We’re here to build a city for crying out loud, not sing songs about chestnuts and an overweight buffoon. One thing that Snowfall does deliver on is a light dusting of the white stuff all over those towering skyscrapers of yours. Light dusting might be an understatement though, since snow can now clog up your roads, back up your traffic, and force you into ploughing the autobahns to keep the veins of your city free of powdery debris. While it should seem likely that obstructed roads are going to offer you, the all-seeing eye, nothing but headaches and unwanted expenses, the result is actually quite the opposite: they in fact really don’t have much of an effect at all. Roads covered in snow only slow down traffic to an almost unnoticeable degree, but everything keeps moving to some extent: no gridlock, no road closures, nothing. In retrospect, it feels like a missed opportunity as treacherous roads would really amp up the difficulty and let players put their micromanagement and road planning skills to the test.

One of the most noticeable new features is the temperature system, found within the user interface as well as in the homes and workplaces of your Cims. The temperature of your city can drop dramatically, especially during the hours of darkness, which sends your electricity consumption skyrocketing. It is no mean feat, trying to manage your power output during the night, and I lost numerous cities to the bite of the frost as my power grid crumbled under the strain of the numerous boilers, radiators, and oscillating tower heaters all getting fired up at once. But never fear, almighty city-planners, as it’s not all doom and gloom. Included alongside the baltic temperatures is a new water-based heating system, which transfers delicious warmth through your city’s underground pipes directly into homes and workplaces. This heat comes directly from specialised facilities, either a boiler station or a geothermal plant, which work to nullify the shafting your power grid receives as the temperatures tumble. As Cims receive heat from geothermal sources, they’re less likely to use electricity to heat their homes which caps usage to a reasonable level. This is a fair trade-off, if you can afford it: upgrading pipes to transfer heat is virtual extortion, not to mention the eye-popping prices of the stations which generate heat. Regardless, it’s a cool new feature which certainly adds some extra depth to the game as a whole, even if it takes a while to save for.

A variety of new maps have also been added, each with a winter theme. They’re not exactly desirable for a resident, living year-round in an unfaltering glacial snowglobe, but for creators wishing to jump headfirst into the arctic action, these new maps should be your first port of call. Starting in these areas offers an extra challenge as you sow the seeds of your city, with power demands being unusually high from the offset as well as a variety of other weather related issues. As tricky as it can be, the feeling of conquering another night of frost when your city is so small and delicate is extremely rewarding to say the least. While all these features provide Skylines with more depth than ever, I can’t help but feel that Colossal Order could have taken it further. The trials that the wintery weather offers can push your city to the limits, but why stop at just electric-starved buildings and black-ice coated highways? Unleash the harshest winter in video game history, one that would made even a polar bear shiver. Spike the mortality rate in unheated homes; increase the illness rate as people contract the flu; drop industrial income as people call in sick or get stuck in gridlocked traffic. Even with all the visual realism the snow offers, it’s hard to believe that temperatures can drop to -21.5 celsius and people aren’t dying of hypothermia in their igloo-like homes. This might me sound like a sadist, but for a game that strives for accurate simulation, it feels like it misread the connotations of winter. Sure, it’s Christmas, but it’s also sub-zero outside. Strike that balance between naughty and nice.

Forgetting what Snowfall misses out on, the expansion is generally well executed and adds an entirely new dimension to the city builder. At the price point of £9.99, it offers a fair amount of new features and attractions to enjoy, even if the ideal release window of last November, when everyone in Britain was yearning for real-life snow, has been missed. The temperature system keeps you on your toes adding a new angle of difficulty, and the new maps are a pleasure to play. Snowfall is certainly a worthwhile addition to any Skylines fan’s collection.

Snowfall is a generally well executed if rather mistimed expansion to Cities: Skylines, allowing you to build expansive cryogenic creations but unfortunately doesn’t go far enough in terms of providing a wintertide chill to truly remember.