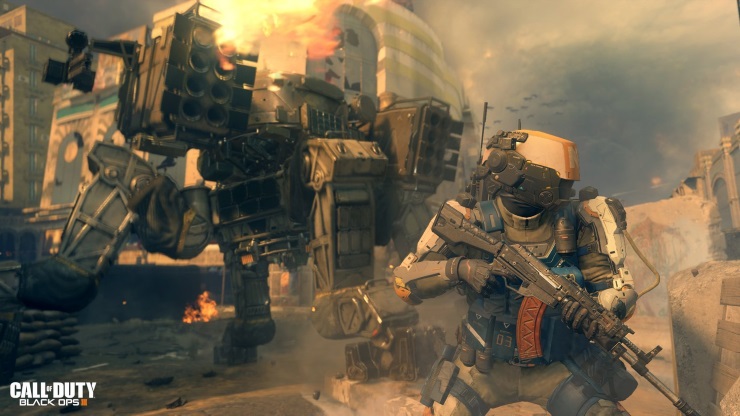 Say what you want about the Call of Duty franchise, but it’s hard to deny that mechanically it is one of, if not the best first person shooter available. Sure, the story, setting and guns may change, but at the actual act of shooting it’s second to none, and it is the surrounding features that decided whether this year’s entry will be as revolutionary as Modern Warfare, or a let down like Ghosts. Fortunately Treyarch has once again delivered it in almost every department with Black Ops 3, and as a result this is another incredible entry in the series.

The biggest allure of any Call of Duty is the multiplayer, and Black Ops 3 is no different. As you would expect there are hundreds of weapons and attachments combinations along with multiple perks, grenades, and wildcards which offer one of the most customisable and content-packed online experiences ever. After the top players have had their hands on it for a while I’m sure that a few overpowered weapons will come to light, but everything seems to be well balanced and practically everyone I was playing with found a unique weapon that they preferred. For me it was the KUDA sub machine gun, that features a fast rate of fire and when fast mags were added it becomes near unstoppable. But the semi auto sniper rifle or big machine guns are equally viable options, which shows just how diverse the options are this time around. That said, shotguns do feel a little weak, due to the fairly large and more open maps. Speaking of the maps, there are some real corkers this time around, along with more than a few average ones. Redwood (which looks suspiciously like Endor of Star Wars fame) is great fun and has tons of areas to utilise the new wall running mechanic, while Combine is one of the better small maps that has been seen in the series. Others such as Breach, Stronghold, and Aquarium offer memorable and different environments, but some such as Infection feel slightly dull, while Havoc basically feels like Afghan from MW2 with a slightly new layout.

All the favourites modes return including Uplink, while Safeguard is the sole new addition. Here a team has to escort a robot from one side to the other, while the other has to stop them doing it in the time limit by destroying the robot and killing the escorts. It’s a fun distraction but won’t be a mode many play for long.

Multiplayer certainly feels like more of a refinement on existing systems than Advanced Warfare did when it totally changed everything, but that isn’t a bad thing. The over exaggerated movement system has been reduced to only a few small movements at a time, while the wall running creates new ways to traverse the world and look cool while doing so. Shooting feels as good as ever, and the potential for big plays seems even higher than before. Fans of old school quick-scoping may be somewhat disappointed as it feels near impossible – although I did hit one, perhaps more by luck than anything else. What is perhaps most important is to notice that this was the most fun I have had playing Call of Duty since Black Ops 2. All the mechanics string together superbly, making every kill a satisfying one.

The single player campaign is less of a positive story. Treyarch has always tried something a bit different with the story and this is no different. There never really feels like there is a major threat to the entire world, so there isn’t much motivation to go in and kill everything. The other issue is that it takes a long while for things to start making sense, and even when they do, it isn’t overly clear. It may sound like I’m down on the campaign, but it’s actually quite the contrary: I think it’s pretty good, it’s just that during the experience, it’s all a bit strange, and it’s only on reflection that qualities shine through, which is no bad thing.

Obviously there are more than a few massive set piece which still look amazing, and there are even some proper boss fights that, while never particularly difficult, do help to break up the constant running down corridors and shooting guys gameplay that is standard. The missions themselves are also a lot longer than normal, usually clocking in between 30 and 45 minutes, which allows them to each have their own small narrative. Voice acting is hit and miss, and they all pale in comparison to Spacey’s performance last year, but expecting any of the cast to top that is a tall order. The spectacle of Call of Duty is still here, it just takes a lot more concentration and thought to truly understand the story. There is also one mission fairly late on that totally differs from the rest of the single player, and it’s brilliant.

After beating the campaign on any difficulty you unlock Nightmares mode, which is exactly the same missions as the campaign; just in a different order, with a new story and zombies. Despite feeling like a bit of an afterthought – everything is the same, they just added zombies and added a new voice over to the cut scenes – this is an incredibly fun and challenging experience. It’s a nice addition that, with a bit more thought and resources could have been something truly special.

And of course it wouldn’t be a Treyarch game without a proper zombie mode to sink hours into and still suck at. The map that comes with all versions of the game is Shadows of Evil, and is the largest zombie map to date. While it’s the standard wave survival that we all love, there are a few new ideas here, such as the beast: a mythical creature that one player can become once per round. As the beast you lose your weapon but can grapple zombies with one of your tentacles. Your other ability is what most affects things, as you can power up electrical items such as the perk machines and other items around the map, using this at the right times is key to success. There are of course a lot of secrets and easter eggs in the mode that will undoubtedly take a while to figure out, and at this point we’ve only managed to scratch the surface of what is on offer. For those of you looking for a lot of depth and a challenge: this is the best Zombies yet. But for those who prefer the smaller, tenser experience, then this may feel a bit too big.

Across all of the game modes when things go right it feels incredible. Whether it’s getting multiple kills in multiplayer, finally killing a boss in the single player, or making it past wave eleven (it’s really hard) in zombies, it just feels great. The shooting mechanics are as good as ever, the multiplayer is one of the best in recent years, and the refined movement makes it much more pleasurable to play than last years offering. The only slight misstep is campaign, and a bit more clarity and a better sense of threat could have resulted in one of the best single player Call of Duty games ever.

Combine all three of the major modes in Black Ops 3 and you’ve got easily the best Call of Duty game on the current gen systems. Surpassing an excellent Sledgehammer effort last year, here Treyarch cement the fact that Call of Duty is still the shooter to beat. Essential.

Review based on time spent at an Activision hosted review event. The publisher paid our travel and accommodation. Further testing was done at home on a retail PS4 copy.
Liked it? Take a second to support GodisaGeek.com on Patreon!

Incredible gunplay.
Multiplayer as good as ever.
Zombies is back, and much bigger.

Campaign is a little confusing.

A phenomenal multiplayer along with a larger, improved zombies mode mean that, although the solo campaign is a slight misstep, Black Ops is the best call of Duty on the current gen consoles.

You may also like
ActivisionCall of Duty Black Ops 3PC