previous
The Evil Within: The Consequence Review
random
next
Turtle Beach IMPACT 700 and GRIP 500 Review
Game of the Month
0 likes 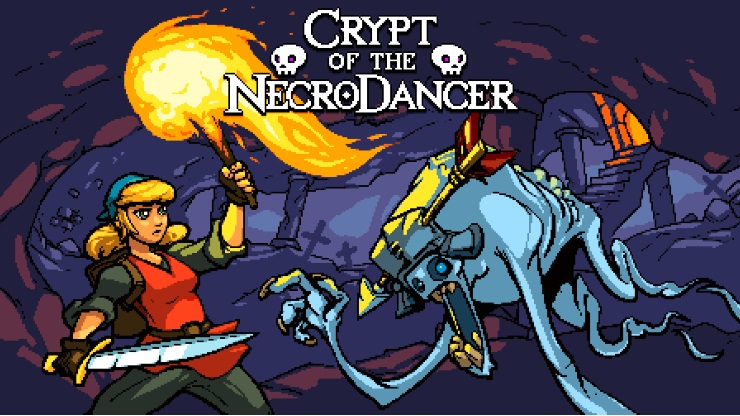 Why in the name of bloody hell has nobody thought of this before? A rogue-like dungeon crawler that removes the freedom of movement, and ties the player to a beat. Even then, it goes further than it probably needs to, as every enemy encountered has a unique pattern moving on the beat that requires you to learn and approach in a different way. It’s simply one of the most creative takes on a genre I’ve ever seen, and I’ve seen a lot of games.

There’s no controller support (nor should there be), this is the purest of ideas. A heartbeat will throb in the centre of the screen, and lines will approach from either side. That’s your beat – and though it’s not actually tied to your health in a mechanic way, it feels as though you are pumping the very lifeblood that creates your character’s pulse. The music throbs, and within ten minutes it’s become so engrossing you don’t even see the lines that indicate the beat, you feel it instead. So much is going on as you bounce through the dungeons: each floor has a larger-than-usual enemy that is a sort of mini boss battle (it has more health than standard enemies), and when defeated it’ll open the next floor, and so on. Simple distractions that you’d seen in other games, like a shop, are enhanced by the shopkeeper singing along to the song. It’s magnificent, and it’s utterly stupid – I love it. Directional arrows also litter the floor that will automatically bounce you in that direction, bomb-pads make huge explosions appear (get out of the way, quick), and plenty more. The difficulty is increased as you progress, and all of these other things make it harder, too.

In an effort to counter the difficulty, you can collect diamonds and coins. The former are spent in the hub world on permanent health increases (and other things), while the coins are spent on the in-dungeon shops. Armour, weapons, and other buffs help you out in a plethora of different ways. One sword will have a larger attack area, meaning you can tackle some foes before they upon you, whereas another sword might heal you as you strike, but be poor at actually damaging enemies. It goes further still, by allowing you to use bombs, and other offensive and defensive items. A temporary shield can be picked up and activated by hitting up and left, for example, while magic spells can be cast, or bombs can be dropped by quickly tapping a different combination. There is a story, but in all honesty you probably won’t care about it all that much. Brilliantly, co-op makes an appearance – one player on the arrow keys, the other on WASD controls. The crux always remains the same: you need to move in a way that causes your enemy to become vulnerable. One of the first enemies makes this clear: as a skeleton raises its arms to attack, you must move away, then back towards it as you know it’ll drop it’s arms after one tile, leaving it open for you to end it.

Unlockable characters have their own unique skills, adding yet more depth. It’s tempting to play as the Bard, because he removes the beat counter, essentially pausing the game until he moves (and it’s rare to see a developer give such freedom for how you play, as this almost goes against the core idea), but you’ll quickly find a preferred combatant. Perhaps you want to have infinite bombs that you can kick at people, because that’s one of their skills. It’s a nice touch that you are told how to unlock them, too. Crypt of the NecroDancer doesn’t want to confuse you, or be obtuse. No, it’s all about the fun, which is refreshing. Boss battles mix it up further, and though I won’t spoil any of them here, I will say one that takes place on a chess board is so clever, and only after beating it and reflecting upon it do you fully understand how clever. At times the boss battles aren’t as challenging as they might be, but the route to them is often very difficult, like solving a puzzle on the fly while enemies bombard you, and that alone means it won’t be to everyone’s tastes. Of course, it wouldn’t work at all if the soundtrack wasn’t absolutely killer – and it is. Electronica with a hint of chiptunes (exactly as you’d expect from Danny Baranowsky of Canabalt and Super Meat Boy fame), and even as someone who leans more towards guitar-led, rock music, it’s enthralling and inch perfect. This is one you’ll put on when you’re not playing the game. Somehow, NecroDancer is funny, too. Bouncing around the shop trying to decide what to buy as the shopkeeper sings along, because you don’t want to lose your multiplier by standing still, is one of my favourite comedy-gaming moments of the year so far, and I get the feeling that Brace Yourself Games knew exactly what they were doing here. Mistakes are punished by death, but starting over doesn’t feel like a grind when the accompanying audio is so good.

Crypt of the NecroDancer is that rarest of gems, one that seems familiar enough to please genre-fans, but one that also innovates in such a clever, intelligent way, making it just an absolute pleasure for anyone who happens across it. There’s never a dull moment, and a planned quick go turns into a lost hour of fun. Console gamers should be bombarding Brace Yourself Games in the hope that they too can have their chosen platform graced with something so different.

Some may feel it's a bit hard.

Unique, challenging, glorious. There's simply so much love poured into Crypt of the NecroDancer, that it's hard not to fall deeply under its spell.

You may also like
Brace Yourself Gamescrypt of the necrodancerReviews